In 2002 I framed a $200 check from a company called thestreet.com. It was the first time I ever got paid for writing anything. When I went to get the frame, the guy said, “are you sure you don’t want to cash this?”

“No way! Someone actually paid me to write words down on a piece of paper. This is going to be worth a billion dollars some day.” Except I didn’t actually say that. It was winter and I was proud and happy and wanted to hang that up on my wall forever. 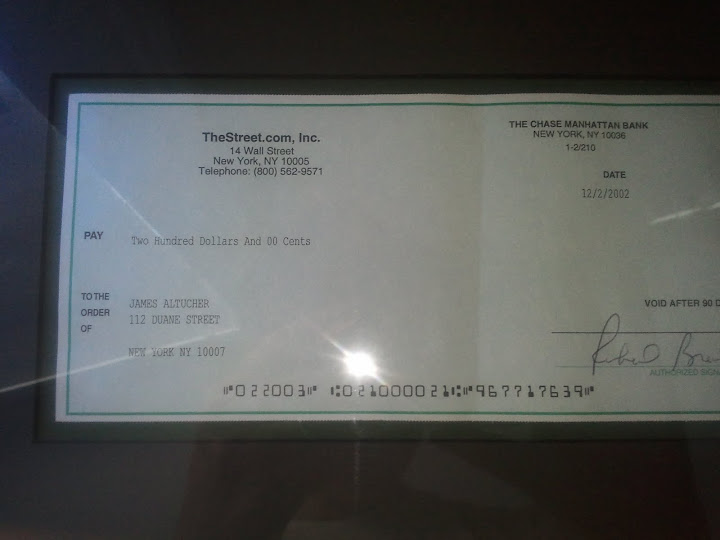 A few years later I had to take the check down for just a day. Thestreet.com had just bought my company, Stockpickr, and I wanted Jim Cramer and Tom Clarke to sign the back of the frame. Let me tell you what happened: Tom Clarke, the CEO, still a good friend of mine, had given me a call in mid-2006. He said, “let’s get together for breakfast and brainstorm ideas.” We did this once every year.

“Great!” I said and we made plans. At the same time, a bank had made an offer to buy my fund for a very generous amount. My business partner, Dan, got the documents and said, “We can’t sign this.” I was standing in the lobby of the Chelsea Hotel at the time, which was like my home away from home. I kept pacing. “Why not?” I wanted the money. But my eyes gloss over whenever I read legal documents. I just assume someone is about to screw me and I tend to let it happen. But Dan read them.

Dan said, “You have to sign a six year employment agreement and at any point they can fire you and get all the money back.” So we didn’t sign it and I was very upset. It showed me that the business had no value other than the people in it (Dan, me, and we had one employee, Omid, who later did this famous video). My lawyer, Jay, even said, “slavery was outlawed in the 1800s I thought.” Maybe the one piece of advice Jay ever gave me that didn’t result in a chair being thrown at me.

But flexibility is one of the keys to dominate anything you want. We shut down the business instead of selling it and I had two weeks to prepare for Tom.

I called up the guys in India and had them make sketches of what I thought would be a good “Myspace for Finance” site. I showed them to Tom and said, “this is what I’m working on. I would’ve done it with you but the site is almost finished.” So what started as just screenshots quickly became a business then then became a sold business (thestreet.com bought it in April 2007). (See, The Easiest Way to Succeed as an Entrepreneur)

So I took the check off the wall and brought it to Jim Cramer and Tom Clarke and they signed the back of it. Everyone was happy. The market was peaking, life was good. Then I took a roller coaster ride I wouldn’t wish on anyone. Who would want all their guts and brains carved out and then put back randomly inside of them until they were only a jigsaw puzzle of what they used to be? Sometimes that happens.  Maybe you would pretend to be a psychic also. Just to touch people. 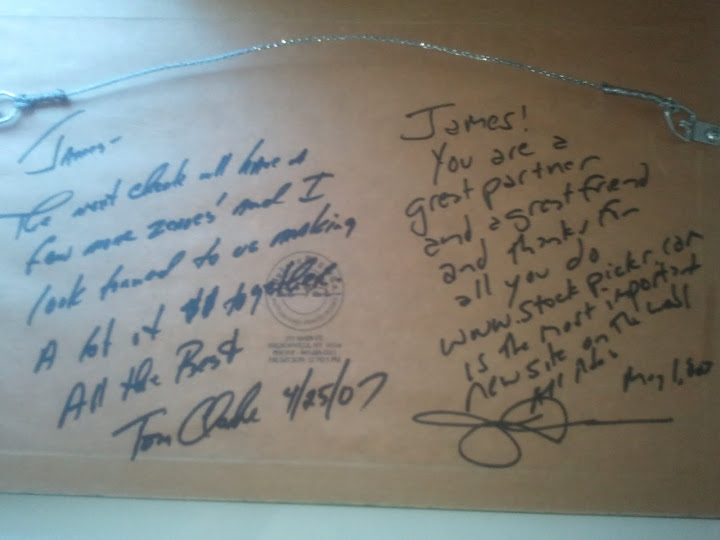 A few weeks ago I wrote Jim Cramer and suggested we do a video together for old time’s sake. The market was collapsing and I thought we could have an interesting discussion on why people were over panicking and what they should do about it. I felt we could help people.

“James–sorry to be so obtuse but why would I want to do this and for who?”

“It would be for you, thestreet, whoever you want. For me, its just interesting. It wouldn’t really benefit me in any way. But I feel it would be an interesting discussion. It reminds me of that very first video we did.”

Alas, we didn’t do the video. I felt bad (See, “10 Things I Learned from Jim Cramer”). I was happy to just do it for thestreet.com with no benefit to me. And I had an idea on exactly what we could do to help people.

So once again I’ve taken the check down. It had been posted on the wall directly in front of my desk. But now there were some negative feelings surrounding it. Time to go. (Cramer had the right to refuse my request. No hard feelings. It just was no longer the best thing for me to look at. I’m throwing this parenthetical in because Claudia even said, ‘are you sure you didn’t just directly quote him because you’re a little angry?’ And maybe yes, a little, but at the same time he absolutely had the right to say no.).

So, of course, I wanted mysticism, sex, and outer space.

So I hung up this animation cel in its place. 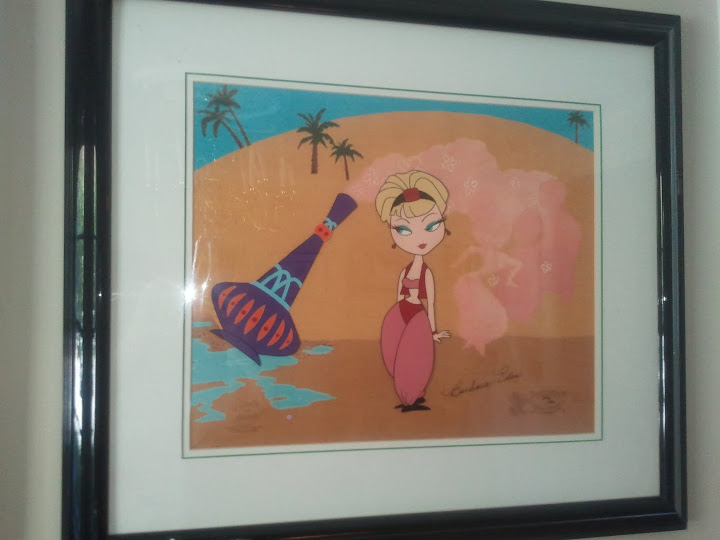 Its an animation cel from the opening sequence of the 60s TV show “I Dream of Jeannie”. It’s even personally signed by Barbara Eden, who I had a crush on as a kid. I wanted to be Major Nelson, an astronaut who finds a genie who grants all his wishes. He went for the stars and ultimately his dreams came true. Maybe one day my dreams might even come true. Or maybe I’ll finally get smart and stop having them.

For other posts about stuff hanging up on the walls in my office there’s: