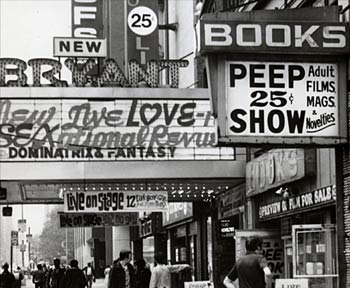 Instead of going to school, I hid in the back behind the chimney. I heard the garage door open and close twice. My parents were gone. I ran through the corn field out back to Route 27. I took the bus to NYC and got out at Port Authority.

On 42nd Street guys would yell at me and try to grab my backpack, or say, “girls upstairs” or “knives, drugs, ID, guns”. Everything was for sale back then. I badly wanted to go upstairs and see the “girls” but I was afraid.

Another time I actually did get mugged there and had my backpack ripped off (and lost a chessboard – fuck you mister!). Another time, right on 42nd Street, a woman got run over and killed by a hit-and-run cab while she was walking right next to me. But that was many years later.

I took a subway downtown and I got a garbage bag and started going from garbage can to garbage can. I was wearing my nice argyle v-neck sweater. I looked pretty cool with my braces, glasses, acne, red blotchy cysts, and uncombed hair. You know – like a teen sex idol.

No wonder all the girls loved me in high school. I was thinking, if only they could see me now, sifting through junk in garbage cans.

At each garbage can I would try to find the metal coke cans I could redeem for five cents each at various stores. On the bus ride coming in I had calculated how much money I would make. The word “RICH!” kept appearing in my head while I listened to “Eye of the Tiger” on my walkman. I figured I would make so much money I would rent a stretch limousine to take me to school the next day and then all the drug kids would think I was cool.

People kept staring at me. I’m not really sure why. Either I didn’t look like the type to be going through garbage cans or somehow I was going about it completely wrong. Like they were looking at me and thinking, “that suburban kid has no clue about technique”.

After two or three garbage cans I gave up. I had found no coke cans and the whole thing seemed pointless and I was embarassed about all the staring.

I went to “Forbidden Planet” and bought some comic books (Dr. Strange, Daredevil, The Watcher). I bought some books about the occult at Weiser next door. I went to McDonalds and read the comic books. I took the 50 minute bus home, ran through the corn fields in the dark, making it back in time for dinner.

“How was school?” was a question neither of my parents asked me ever.

“I learned all about life today,” I never answered in response.

And 30 years later I wrote about the only school day I can remember in this blog post.