How To Be Married For Five Years

I’m surprised Claudia Azula Altucher hasn’t divorced me yet. I’m surprised that she decided to date me to begin with.

I was a separated, but married, man. I had 2 kids. I had the IRS freezing my assets on a regular basis.

The bank was going to take the house my kids lived in. I had no job. I had no prospects. I had no friends. I got drunk every night.

Even a dating service rejected me. Eharmony, after making me fill out a form for an hour, said that “Separated” people are mostly losers so they refused to let me log in.

And I kept dating women who kept saying, “It better be ok with you that I date other guys.” I didn’t like that.

For some people that’s fine. For me it wasn’t fine but everyone was making me feel like I was crazy.

What happened to the world while I was gone?

Every day I always drive her crazy. I say, “I’ve run out of things to write about”.

And, as she put it, “there’s no answer. I have to slowly back away while he stares at me.”

I’m always involved in lots of new projects. She says, “take a rest” and I say I will and then I take on a new project.

[She just walked by me. I told her, “I can’t figure out what to write about”, as a joke. And she asked, “Well, what happened when you went outside for coffee?” So I appreciate her trying.]

I think it’s very hard to be married. I’m sort of sick of her right now.

We just spent five straight weeks working together on projects. I think we spent every moment together.

Maybe she is sick of me also.

We wrote a book. We went to London to give talk. We shot a bunch of videos this week that she’s editing for me. She’s translating “Choose Yourself” into Spanish. And it doesn’t end. We do 5 podcasts a week together.

I’m sick of me when I read the above list.

But every morning I make her laugh. I like to make her laugh because she laughs not only with her mouth but with her leg. It goes up and down like a horse.

I make a joke with the sole purpose of watching her entire body contort. Sometimes she can’t even stand and falls to the ground.

Then I laugh AT her.

One thing I know: the most important decision I ever made in my life is marrying her.

I was about to die when I met her. Everything in my life was upside down. The people, my health, I was angry all the time. I was scared. I was depressed. Doctors would give me horse tranquilizers just so I could sleep.

I figured out the exact technique to kill myself as painlessly as possible. I was going to do it.

I just wrote it down here but realized it’s so easy I don’t want people to try it. So I erased it.

Then back so long ago, I saw Claudia online. I asked her where she was from. She said, “Buenos Aires”. I said, “Oh! I never been to Brazil before.”

Somehow after that mistake she stuck with me. It’s like I filtered out all the people who would assume I was an idiot (they would probably be right).

Then I wanted to have dinner with her to maybe get her drunk and have sex with her.

And then we took a walk. Then the next date we took another walk. A really long one because I was afraid to kiss her.

Then she went to buy one of my books. Because I went on a signing rampage all over NYC six months earlier and nobody had bought my books, the particular book she opened up of mine in a random bookstore said, “To Whoever Buys This Book, I Love You. – James Altucher”.

She thought that was a sign from God. She checked the other books (they were all unsold and still are) and none of them had that. I remember signing that particular book.

My youngest, Mollie, who was only 7 then, looked at me when I had signed it six months earlier and said, “Daddy! What are you doing?” And I told Mollie, “I love whoever reads this book.”

But it was enough. Because Claudia believes in miracles, she fell in love with me.

You breathe in the energy of the people around you. Claudia has her problems (a LOT of them) but when I breathe in her energy, I live another day.

Then I wanted to make a comic book. So I scripted out when I met her and someone drew it.

They drew her prettier than she is in real life. But that’s ok. She’s very beautiful even when she’s not a cartoon.

In real life I like looking at her. I recorded her once when she was snoring and it sounded pig-like but I love listening to it even though she hates it.

She screamed at me when she heard the recording. I said, “but I recorded it for your health”. She didn’t believe me.

I made her laugh this morning. That makes me happy. I hope I do it every morning.

She will kick like a dying horse, and laugh and fall, and snore like a pig, and back away from me when I glare at the screen , but today I know I will live another day. 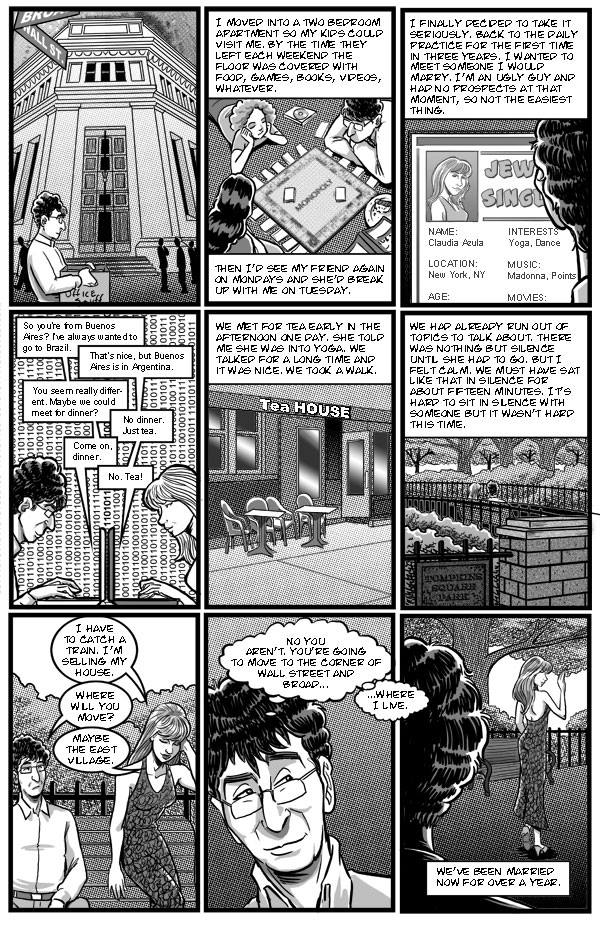