Mouse in the Salad

A few months ago I was playing backgammon with Stephen Dubner when we saw something that was so repulsive it almost made me throw up right on the spot. And I thought Dubner was going to pass out because I’ve seen him do that before in situations that other people might just label “gross” and walk away.

Here’s the thing about Dubner. He wrote Freakonomics which catapulted him to success. And I think its a great book. I wrote about it here ( The 5 reasons Freakonomics was a bestseller). But here’s the reality: I think he’s a world-class writer with his other books. “Confessions of  a Hero Worshipper” is one of my all-time favorites.

I hope Stephen eventually writes more books like that. I might’ve even been telling him this (lecturing the best selling writer on writing) while we were eating at Le Pain Quotidien on the upper west side and playing backgammon. He might have even been beating me in that particular moment so the interruption was welcome. Beating me at a game is almost an unforgivable sin but every now and then he gets away with it.

Suddenly, we had to stop the game.

The woman at the table next to us started in with a combination of screaming and crying. It was one of those horrible animal sounds when all the animals around sense something is very very wrong and look over.

Here’s what was wrong: [Don’t scroll down if you can’t take it] 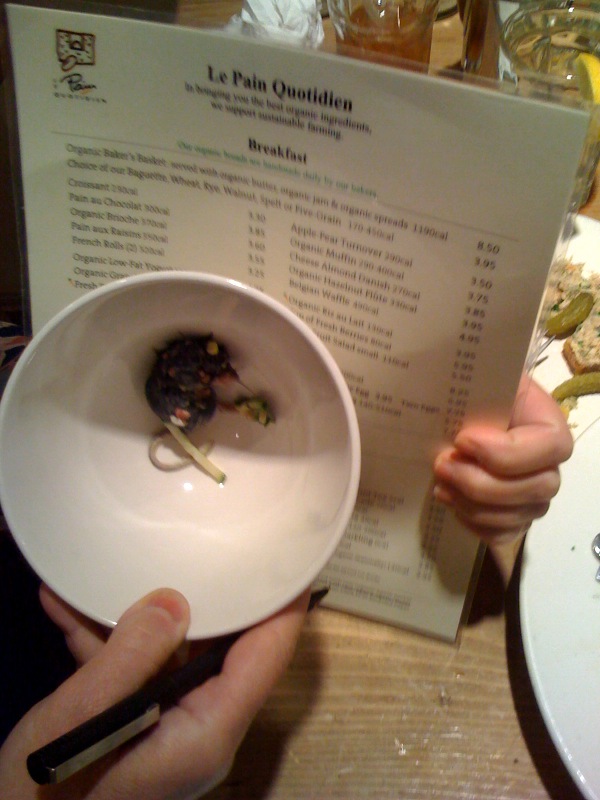 There was a dead mouse in her salad. She moved it from the salad to a bowl. I walked over there and asked her if I could take a picture so she could have it in case she needed it for anything.

I was being nice and she thanked me profusely but my real motive is exactly what you are seeing here: I wanted to write a blog post about it. I play a humanitarian on TV.

Le Pain Quotidien is a great chain of healthy restaurants. But its growing fast. When a company grows fast things (mice) literally slip through the cracks. Stephen did a radio show about the situation a few weeks ago. I said on the show:  A lot of things have to go wrong in order for that mouse to get there.

Its not a simple mistake. A bag of salad had to be left open in a kitchen, unobserved. A mouse had to crawl into it. The salad had to be then shut. The mouse then died. At some point in the future the salad was removed from storage and opened. A hand reached into the bag and didn’t watch what it was doing. It pulled out a bunch of lettuce, and one dead mouse, and put it on a woman’s plate. All unnoticed.

Things happen from the top down. Its not the waiter’s fault. Or the guy in the kitchen’s fault. Or the manager’s. Somewhere near the top of a fast growing company, an executive can’t handle the growth, and doesn’t put the structure in place for a mouse to sneak into the salad bag.

This happens with every company on the planet. A mouse in the salad means congrats, you are growing. But it also means if you can’t handle the growth, you’re about to die a horrible death. Trapped without oxygen in a salad bag.

A waiter had to then take the plate, and still not notice the dead mouse that was on it. It was delivered to the woman. The woman began eating the salad. Until she ate enough lettuce to uncover the mouse, or until she stuck her fork in it and picked it up.

Stephen put on his Freakonomics hat. We didn’t pay our bill and we packed up our backgammon set and began walking out. “Lets let the manager set the price of the bill for us.”

At the door, the manager came up to us. Stephen said, “look, we mostly finished our meal but now we don’t feel so well, given the mouse thing. What do you suggest we pay for this meal?”

Stephen’s theory was that if the manager was good, he would have us pay nothing, even offer us incentives to come back. Stephen’s going to write about this when the radio show comes out so I’ll let him finish off what the manager said. Apparently, in his article he mentioned that some professor disagreed with his approach.

As we were leaving, the woman who found the mouse in her salad came up to me and said, “Thank you! Thank you so much. You are very very kind to help me out here.” No problem, I said, I wanted to help. I would hate to find a mouse in my food. I was actually feeling a gag reflex as I was thinking about it. I think I’m feeling that even right now as I write this.

She was still thanking me. “Its very sweet that you would help us. My friend and I eat here regularly. Maybe we will see you when we eat here again next week.”