My One Year Blogiversary – What I've Learned

I think I amputated my arm on this blog over this past year.  At one point Henry Blodget asked me, “what happened to you?” because everything in my writing turned upside down. One of my neighbors asked me last January, “are you about to kill yourself or something?

Every day I do surgery on myself. I try to cut out my ugliness. We all have pure affection as kids. Then, when we get older, our ugliness carves itself into our insides. We hurt people. People hurt us. Memories crop up that can’t be forgotten. We fail. We lose money. We get rejected. Our breath stinks. Our lies rise up in the heat and can’t be caught. I started the blog wanting to surgically remove all the things inside me that made me ugly. Hideous. Miserable.

Today marks the one year anniversary when I really started being honest, stopped doing useless articles about stocks, and started laying myself bare on this blog. I’d come to the age when I knew every hour that passes costs me something. I’m losing. A battle against what? Against everything. I used to be in a hurry to get older. To have sex. To make money. To claim freedom. Then I became afraid to admit that youth was gone. I didn’t want to hide anymore. I think I was also afraid of becoming invisible. There’s a lot of small and broken seashells when the tide comes in.

I wanted to change myself into something I could be proud of. Instead of a useless piece of feces floating in the jetsam of trash society spews out every day.

So I only wanted to write about things that interested me and they had to have the following qualities:

B)      Don’t Harm Anyone. I try to stick to that rule but it’s occasionally hard. People are easily offended. If I touch their electric fence they want to shock me. So far, I’ve had to change two out of the 255 posts when I was told I had gone over the line.

C)      Help people. If a post is just a story with nothing to learn from it then I usually just leave it out. I write a post every day, seven days a week but usually only post about 3 or 4 days a week. I’ve done 255 posts in the past one year.

I’ve had five types of posts:

A)     Opinion posts: For example, “Abolish the Presidency” or “Why I Will Never Own a Home Again” or “The Ten Commandments of the American Religion”.

C)      Personal posts: things that have happened to me that I wanted to share and I think my dismal failure in various areas can be actually more inspirational than writing about blazing success. Examples are: “How I Screwed Yasser Arafat out of $2 million“ and “How I Met Claudia”.

D)     Very personal posts: Posts that almost have no point at all and go to the edge of what is “personal” and what is “private”. Interestingly enough I think these are the best written but get the least traffic. And example is  “My New Year’s Resolution in 1995” or “How to Spy On People”. I haven’t posted as many of these lately but I’m compiling new ones for a book for 2012.

E)      Inspirational posts. For 43 years I’ve been trying to make my life better, like most people do. And I haven’t always been successful at it. I’ve been studying through trial and error, here and abroad, about every philosophy, religion, self-help method, etc for the last thirty years. None of it works.For instance, after much trial and effort I realized at the age of 12 that I was NOT going to be able to see naked women via astral projection.

But I do know what has worked for me whenever I’ve really needed to get off the floor after a dismal failure and force myself to survive . My two most popular posts in this area are  my post describing “The Daily Practice” (which I then offer modifications in my book “I Was Blind But Now I See”) and “How to Deal With Crappy People” which I think are the two most important posts for surviving day to day, at least for me. All of them are really but those two are critical. Oh, and along with “The Power of Negative Thinking”.

I like all of the above categories. The inspirational posts and the opinion posts do the best in traffic. But I try very hard not to care about traffic and usually rotate among all of the categories. Unfortunately, I have an addictive personality. So I probably check traffic too much. But whatever – traffic is also a measure of whether or not I’m having an effect. I don’t want to be elitist and not care.

Some lessons from one year of blogging:

1) Pain. There’s a lot of pain out there. I get a lot of emails from people who relate to me and people who have been through much worse. The entire country is in post-traumatic stress over the past decade: 2001, 2008, needless wars, needless pains over the booms and busts. And now we’re in shock. People are so sad.

2) Insecurity. I don’t necessarily mean personal insecurity. But, in general, people have no idea what to do with their lives. The corporate world used to be a safe cushion. Now it’s a thumbtack that you sit on and all the mean kids around you laugh while your spinal cord gets paralyzed as the result of a mindless joke. Meanwhile, everyone wants your money. And more of it. Can you sign right here please? Can you swipe that card through? Can we modify your loan? Can we own you for a little more time?

3) Spirituality. It’s a “bad word” actually. People don’t want to hear it. But we’ve lost all sense of it. And now, slowly, we have to begin to understand what it means again. It’s more important than the  post WW II materialism that’s dominated the country until now. We have to return to the question: “Who Am I?” and not have the answer be a man-made label. That’s all spirituality is. I learned this in the course of doing this blog and also looking back at my disparate failures and realized what had worked for me in order to get up off the floor. It’s to find exercises that can strip me of all the labels I thought I needed to live. Those labels were just band-aids. The blood and open gashes were still there.

4) Health. In every way, society, government, culture, media has brought us into a state of severe mental disability. We get caught up in angers and fears and lose our creativity and our ability to innovate. I’m not saying everyone should start a business. but people have no clue what it means to be happy. And when I say “we” I really mean “me”. Most of this blog is just me exploring that. For every post, I had to really think about what I personally need to do to be a bit happier and what the steps involved are. And not just happy today but how to keep an ongoing discipline going so I’m not lured again into the brainwashing that occurs.

6) Goal. I have no idea what the goal of doing this blog is. I don’t want ads. I think I’m still afraid of being invisible. To not be thrown out. And I guess a little too much I like to be liked. People sometimes ask me how I could not care at all about all the comments I sometimes get, some of them very negative. That I must be able to somehow handle it. But I can’t. I really just want people to like my stuff all the time. I guess this is not a lesson but more an observation.

7) My experience. I hate posts that are are “top 10 ways to be better” and the author doesn’t tell his or her experience. Nobody knows how you can be better. Everything in this blog is only based on my experience. Don’t believe anything I write here. But you are welcome to try everything and experiment and see what works. It all worked for me. Hopefully some of it will work for you.

8) Publishing. My entire view of the publishing world changed and I learned a lot by self-publishing these two books. “How to be the Luckiest Person Alive” and “I Was Blind But Now I See“. And I’m about to come out with a comic book, “The Altucher Confidential” (on December 16). Additionally, I’m planning on doing no less than 5 books next year starting with the first one, which the work-in-progress name is “Bad Behavior”. In this post, I offer a free copy of “Bad Behavior” when it comes out. 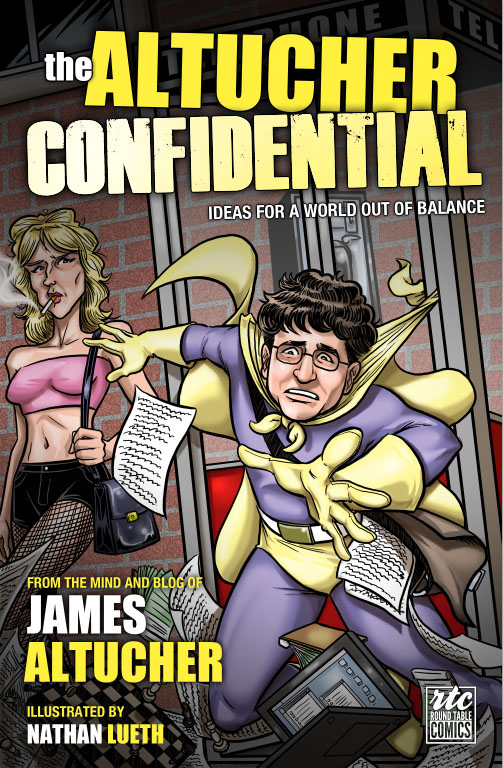 9) The Blogging Genre:    I try to make each post a literary work that also helps people. The genre of blogging is evolving. By literary I mean it has to have a strong voice and has to tell a story. It can’t just be a list. By “helps people” I mean it has to solve a problem that I personally have had difficulty with over the years and think I have a handle on now although I’m always striving to improve more.

There’s two types of blogs that I think will eventually disappear:

The self help blog: i.e. it just has the problem and the solution. But if the reader can’t relate then the blog loses its relevance. There’s no story-telling so it’s just some expert voice from up high, coming down to tell us what to do.

The “what I did today” blog. It’s interesting and voyeuristic but ultimately people need help alongside a story.

10) Friends. The best lesson of all! I met a lot of interesting and good people through this blog. I think people used to be limited by the tens or hundreds of people who lived near them to find friends. But now we have no limits. I have found friends this past year from every continent who have uplifted me and inspired me and I met them through this blog. I hope we all continue to keep in touch. It may sound crazy but I view many of the people I’ve met through here as already close friends.

Finally, I’m really grateful for everything that’s happened to me this past year. I have become a mutant douchebag that has changed.

My biggest fear is that I would run out of things to say. That the life  inside of me would dry up and nothing would be left to pour onto the page. But so far, so good.