Name Me a Single War that was Worth It?

Ugh, it’s Memorial Day (when I am writing this). I’m one of those people who for four generations at least have zero experience at war. I was too young or old to be in any Gulf War. My dad was 5 when WWII started so too young for Korea and too old for Vietnam. And his father traipsed across Europe under a fake name (would my life have been different if I kept it – “Greenberg”?) to avoid the front lines of whatever war he was avoiding. Who wants to be dead?

Even WWII. What did we do? What has Europe ever done for us since then?  Good thing we bombed the hell out of Europe so the IMF can go around raping everyone now. We can say, “Well Hitler was killing the jews! We had to go in there!”

Are you kidding me? He KILLED the Jews. It was already over for six million Jews by the time we stepped foot in Germany (and millions more displaced after much anguish). And the gays, the gypsies, France, parts of England, and whatever else Hitler felt like.

We only went in there after the war was already lost. We didn’t help anyone. We didn’t save a single Jew by going into WW II (or, at the very least, from the mid 1930s to 1945 six million jews were discriminated against and then killed without our help). In fact, it’s well known FDR turned away some of the Jews he actually had a chance to save who then ended up going back to Europe and dying (apparently the US had “immigration difficulties”  with them).

Plus we kept a bunch of Japanese locked up while we killed millions of their citizens and reduced their culture to making matchbox cars and faulty watches for generations. For what? Because they were trying to take over China? Heck, what difference to us would it have made? I really ask – would it have made a single difference? Are Chinese citizens, 50% in poverty, better because we nuked Japan?

And now Europe mostly hates us. 418,000 American kids killed there.

What war did we really need to go into?

WW I –  I kind of challenge anyone without looking at Wikipedia to even tell me what that war was? Some Archduke was killed. 117,000 18 – 23 year old American boys had to die there because of that?

Korea and Vietnam? – we already know those were a waste (thanks to M.A.S.H. – god bless TV). 33,000 Americans died in Korea (forgetting about the millions of Koreans and Chinese) and 58,000 people died in Vietnam. And by the way, we lost that one.

I’m not trying to be “pro-peace”. I’m more anti-stupidity. What happened there? Was our white picket suburban way of life threatened in those wars? 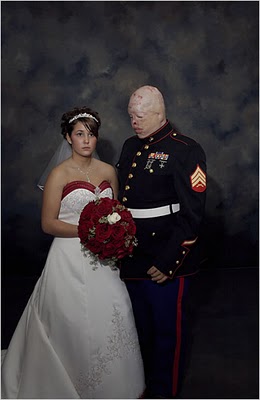 (the wedding of a 20 year old American Iraq war victim)

Iraq and Afganistan: Over 40,000 American troops have been killed or injured there. Much more than died in the World Trade center. And this ignores the 800,000 Iraqi civilians killed.

Tell me a single war that might’ve been good? We destroyed Iraq and now it’s helpless. We can’t even rebuild it. Afganistan is back to the stone ages and it took 10 years to find Osama in a mansion in Pakistan and we still don’t have the full story on that. I guess I’d be a horrible President.

Unless it was war with Canada (to get oil cheap since they are by far our biggest provider of oil) I’d never go to war with anyone. Libya? They blew up one of our planes 30 years ago and we even let the guys free so they could have a hero’s welcome in Tripoli? What’s going on now?

There’s a squadron of guys in skirts playing bagpipes outside my door this very second on their way to the river. Down the street there’s a cemetery of crosses to commemorate the day. It’s a horrible day in commemoration of mostly dead 18 year olds. Everyone who goes to war is certainly a hero. But the victims far outnumber the heroes.

I hate feeling like a “pro peace” person. That’s not what this is about. This is about those moments when you kill your own life, your own time, feasting on your own angers, sucking them dry even though nobody’s paying attention to you crying like a baby – when you could’ve been doing so much more. You could’ve been building things. Raising a family. Starting a business. Ignoring the people who try to take you down every day at work, among your colleagues, your family. You could’ve been saving lives. And everything would be so much better.

[Update: I put this in the comments but adding it to the article here:

Someone mentioned earlier I was a “lazy ass” because my way of life has been defended and protected in these wars. A couple of points:

A) my way of life certainly wasn’t defended in Vietnam and Iraq. We can argue about the others but whatever.

B) The children in the pics above (and I include the married couple) – was there way of life defended?

C) Iraq was perhaps the first war where I realized that people I held to the highest of respect (Colin Powell, for instance) were going to blatantly lie to me in order to achieve some agenda that had nothing to do with protecting me.

D) my “lazy ass” has hired over 1000 people and invested in companies hiring millions more. Hopefully these jobs create innovation and sustainability that lasts generations. Our way of life is about growth and prosperity. That ultimately leads to less death and killing (look at mortality rates here over the past century). We each should do our part.

E) Nobody is arguing whether or not these children are heroes. They all are. Its just a shame so many of them don’t come back and it’s a shame the many lies that took them there.

This has clearly elicited a lot of reactions in people. Am I a “political expert” as one person asks? Of course not. Nor would I ever want to be President.

But I look at the pictures above and my gut says, “all war is stupid”. There’s no justification. And everyone then starts giving justifications but these were all fed by massive propoganda machines so big we can’t comprehend. We all agree war is bad so we start diving deeper to find the subtleties. But that little girl up there has no subtlety. The wife of that war hero, and I do mean HERO, has no subtlety. And there are tens of millions more like them. What do we do it for then? For my way of life? You can keep it.