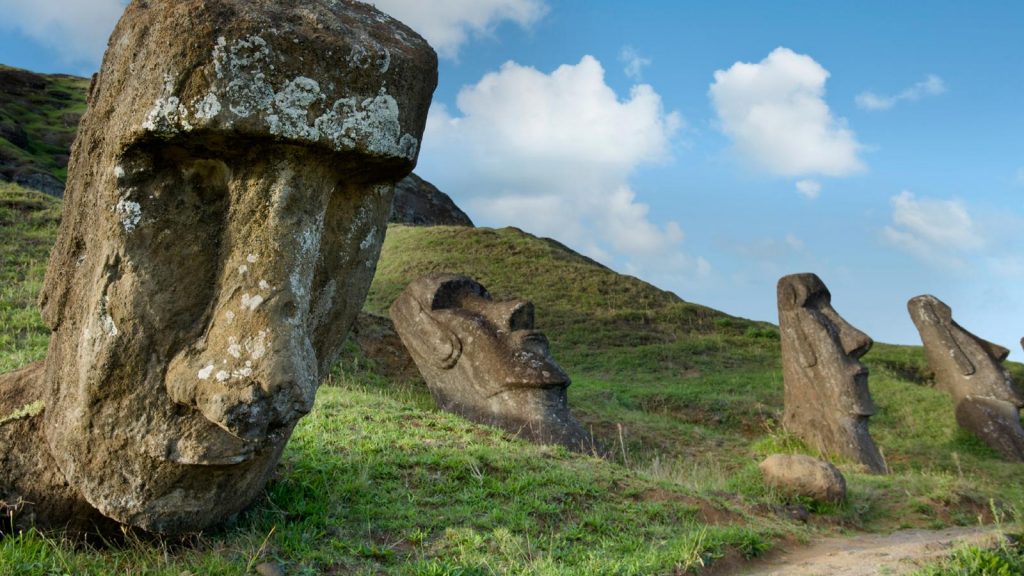 Around 5000 years ago, the aliens landed and handed out little calendars to everyone building those statues on Easter Island.

“Here”, they said, “look here.” And they pointed to a box labeled January 1.

“It’s the first day of the year, you idiot. From now on, when you wake up on this day of the year every year you’re going to say, ‘THIS IS THE YEAR!'”

“Yeah, say it like you mean it. No more eating. No more dating losers. Exercise. Keep a diary. No more business failures. This is it! Nonstop improvement!”

And then the aliens left. Everyone stood around look at each other. “January 1” one of the Easter Islanders said. “January 1!” another repeated.

They joined a gym that was at the other end of the island. They invented disco.

But just three months later they were back to dragging huge stones thousands of miles to make those big statues.

“January 1?” one of them said to another.

And that, Mollie, is the story of how January 1 became the most special religious holiday on the entire planet. It’s the day we wake up and say, now I’m different.

‘January 1’ went viral after that. First in Australia. Then with the Eskimos. And others.

In 1501 there was a block of marble. Michelangelo chiseled away at it, subtracting marble every day for three years, until it finally became the greatest sculpture ever.

Many New Year’s Resolutions are about doing more. Being more. Achieving more. THIS IS THE YEAR!

Knowing when to do nothing is the key ingredient to achieve something.

I learned this by wasting at least thirty years of doing useless things.

Here’s some times when I try really hard to do NOTHING:

Things don’t always go my way even though I have massive control over The Force. And so sometimes I get angry.

Anger is the wintercoat on top of my fear.

When I’m angry I try to figure out what my underlying fear is.

Maybe I’m afraid I’m a bad father. Or that nobody will like me. Knowing where the roots are, allows you to harvest the field. I try to sit down and not act on my anger.

Andy Grove, former CEO of Intel wrote, “only the paranoid will survive”.

That’s a pretty ugly world. Where the only survivors left are people constantly looking over their shoulders and whispering conspiracy theories to each other.

I have gotten paranoid often. Someone is trying to screw me! And usually I’m right.

Paranioa is a “scarcity complex”. I think, “if they do this, then I’m lost forever!”

Whenever I’m paranoid, I try to take a deep breath and…do nothing.

But don’t spend time (do nothing with…) with people who make you paranoid. That’s another example of “nothing”.

Will this deal work out? Will she like me? Will I run out of money? Will they like my next book? Or project? Or whatever?

Did I say something wrong at the party? Am I a good dad or husband or friend or partner?

Of course all of these things matter and are important. But anxiety never helps them. Anxiety only weakens you right now and does nothing to solve the future.

And thinking about what others think of you is the best way to hand over your life to them. Your life!

Are you outsourcing your self-esteem to other people’s opinions? Or the hopes that “something” is going to happen to change your life?

Don’t. Always think, how can I take control back. This is fastest way to well-being.

Anatoly Karpov, former world chess champion, said he only studied three hours a day. After that, he said, it’s useless.

Dan Ariely, author of Predictably Irrational and one of my favorite podcast guests, says we are at our peak productivity from 2-4 hours after we wake up.

So I try to be productive during those hours. And when I’m tired, I try to read and take a nap or go to sleep for the night.

I woke up about 3 hours ago. So this is my peak time of day.

In another hour I’m going to watch “The Twilight Zone Marathon” for the rest of the day.

I admit I woke up today and thought to myself, “THIS IS THE YEAR!”

And, who knows. Maybe it will be.

But first, I did nothing. I fell back asleep and had a weird dream about Easter Island.