I wrote a letter to William Vollmann and told him I had AIDS. It was 1994. I loved all his books, “The Rainbow Stories”, “Whores for Gloria”, “The Butterfly Stories”. He has a writing style that is simultaneously humble, filled with mega-intelligence, honest, fearless, and, in some cases, completely unreadable. Some of his books are thousands of dense pages long. I like his smaller books. He is very autobiographical in some of his books, detailing directly his experiences with prostitutes, violence, Afghanistan, going to Antarctica, hopping trains cross country, poverty, etc. Eventually he will win a Nobel Prize.

His book “The Butterfly Stories” was about a reporter who goes to Thailand, meets tons of prostitutes, falls in love with one  or more of them, and can’t settle back down to his normal life in the US. I read it and decided to write to him. Maybe this was about 18 years ago. I don’t know why I said this in the note but I said “I have AIDS”. It was a lie.

I wanted to be “a writer”. I had written about five unpublished novels. I had been rejected by over 40 agents and by every publisher. I had written dozens of short stories and each one had been rejected by dozens of magazines and literary journals. I probably amassed over 200 rejections. And there were zero nice rejections. Nothing like, “Hey, keep it up. You’re getting better and maybe one of these days….”.  All  of the rejections were form letters. “Thanks for submitting. At this time we have decided not to publish this. Your submission has been enclosed with this letter.”

I then wrote two spec comic book scripts for DC comics. I sent them in. Never heard from them again.

I wanted to break free. I didn’t want to be rejected anymore. I desperately ­­­wanted people to start responding to me.

So I wrote my favorite writer and told him I had AIDS. And that maybe he shouldn’t write about it so much. I wrote that I had nobody to talk to about dying. And I was getting more and more sick every day. I left my phone number.

A few weeks later I was sitting in my house, writing, and the phone rang. I never picked up the phone in 1994 and still don’t. The voicemail picked up and I could hear his voice. William Vollmann. Sort of a thick, slow voice. He was sorry to hear I had AIDs. He wanted me to know there was a large community out there of people I could reach out to.He  also left his phone number if I ever wanted to talk.

Nice guy. I immediately felt bad. And then I felt great! Somebody responded to me! My favorite writer!

And then I felt bad again. It was all on a lie. Being responded to by William Vollmann got me nothing. It didn’t get me published, for instance. It was just a joke. A bad one because now he probably felt bad. For a moment I called it “art”. The art was the combination of my letter and his phone call message. I could display it in a museum side by side: the letter, side by side with the recording of his message and maybe side by side with the book that inspired my letter:

I decided I would create more art. Hopefully better.

So I took a novel I had written, 400 pages , and formatted it so that the entire book fit on one piece of paper. And I handed it out to people. It was unreadable. The text was too small. But it was all 120,000 words, shrunk down so that it could fit (front and back) on one piece of paper.  At least no publisher could reject me. I was handing it out to people. It was art. I get to decide what my art would be.

Then I did another  project.  I took my ten favorite short stories I had written and I shrunk them down and printed them up in a particular way: it was small enough so that they could fit in the palm of your hand (about 2” by 3”) and you would read them in one direction and then turn the book over and upside down and you could read it in the other direction. Like two books in one. The idea is: if you were squeezed in on a bus you wouldn’t have enough room to open up a book and spread it out on your lap and read it. You’d have to read something that took up no more space than the palm of your hand. So you couldn’t even read the two pages side by side like a normal book.

I made 100s of copies of the book.  I went from bookstore to bookstore and gave them a dozen copies each of my small 2-books-in-1 they could sell for a quarter each (the price to play a video game). I called one side  of the book “How I Saved the World from Mutual Assured Destruction”, and I called the other side of the book “How to Win at Video Games” (since it was two-books-in-one it needed two titles). On one cover was a picture of Richard Nixon (the MAD cover) and on the other cover (the video games cover) was a photo I took of a man with no legs. 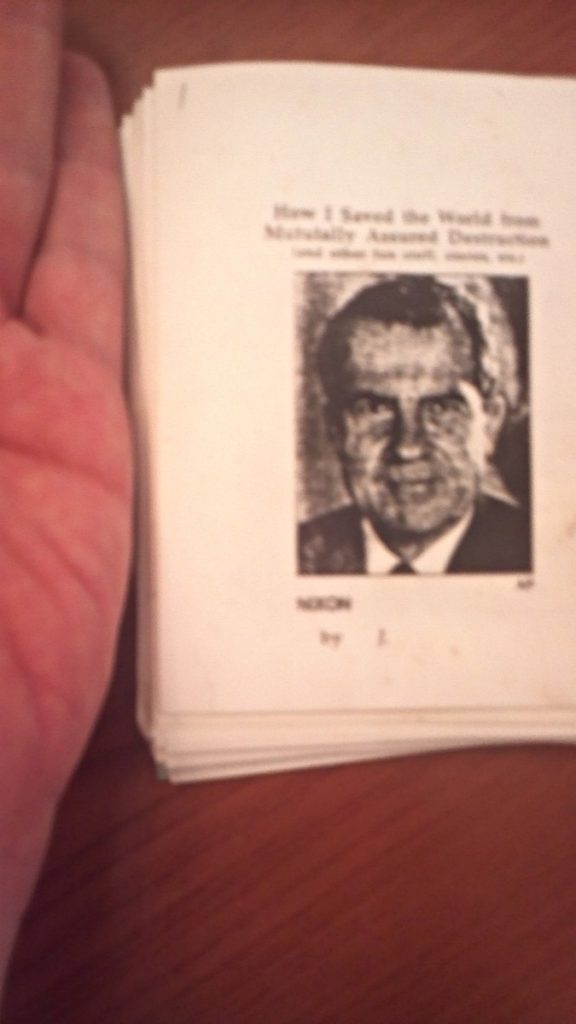 All of the bookstores sold out of the book (or they threw them  out. Who knows?) But I got one call (I put my phone number in the book) from a guy who told me he loved the book because he  “loved video games.”

Ever since then, for 17 years in a row, I’ve been picking myself. I don’t  want to be in a position where someone else has to select me.

I was a “junior programmer analyst” at HBO and somehow they let me interview prostitutes at 3 in the morning and then gave me money to see if it could be a documentary. And while I was doing that I was doing American Express.com and starting a business.  I lost $15 million in the stock market and less than two years later I was writing articles for thestreet.com about…the  stock market. As well as trading for hedge funds.

99.999% of the world has a rejection letter they are ready to send you. If you try and fit within the confines of what everyone else judges to be “correct” then chances are you’re going to be incorrect. You have to stand up and say:

Over and over. Everyone needs permissions, accreditation, validation. You can’t publish a book without a publisher, people think. (See, “Why and How I Self-Publish“) You can’t give legal advice without a law degree (legally you can’t but who cares), you can’t start a business and be an entrepreneur without quitting your job first and raising money and hiring five salespeople to test out your idea. You can’t be a nurse without a nursing degree. You can’t be a certified yoga instructor without, well, a certificate! You can’t work at Goldman Sachs without an ivy league degree.

But those are all excuses. If you love nursing, then go out there and be a nurse. Figure it out! You love writing, then write a book and publish it yourself. You want to make a lot of money being a banker then go out and find a CEO that wants to sell his company and go sell it (for a nice fee). You want to make a TV show then take a camera, have an idea, and make a TV show.

I wanted to make a comic book, so I made one (on sale at Amazon as of tomorrow):

Nobody is ever going to stop you ever again. You don’t need permission from anyone. And every day will be a work of art.