Nobody Told Him He Couldn't Do It

I haven’t left the house in three days and now I smell. And I have coffee stains on my shirt. And I’m working on my splotchy beard.

Claudia and I have been watching back episodes of “Girls” on TV because she decided for the heck of it to work on a spec script for the show even though we know nobody to send it to but I promised her I could figure it out.

Well…maybe I can figure it out. I don’t know.

In the Legion of Super Bloggers I sort of feel that’s like my one skill. I can figure out how to get in touch with people.

I didn’t want to watch “Girls”. All these kids having sex with each other. I was afraid it would make me jealous. Like, “that’s how easy it is for everyone to do it.” Only I wasn’t doing that at 24. But I watched six episodes today.

“You realize that the honorory colonels get the full treatment at the Kentucky Derby,” Dan told me.

Wait. I have more on this story in a second. But first…

I went on a Skype conference call for a company I’m on the board of today. Claudia told me afterwards there was  blood on my face because I tend to scratch my face because I’m sitting at the computer and I haven’t cut my nails in awhile.

Hopefully Skype was blurry. Nobody said anything. Is Skype ever blurry?

Then Claudia said, “Come over here, you have to check out this video.”

We watched this video. Now you have to watch this video. This four year old kid plays piano better than anyone I’ve ever heard. And he’s having fun while doing it. He’s not just playing the piano. He’s playing WITH The piano. Click on the picture to see the video. WATCH THE WHOLE THING.

“How does he do that? How did he learn to do that?” Claudia said.

“Nobody told him he couldn’t do it. He saw someone do it, his brain said, ‘that’s easy’ and he just sat down and started doing it,” I said.

He probably had some basic talent but I bet a lot of people have that.

“You know what else,” Claudia said, “his parents are encouraging him. They told him he was good and made it fun for him.”

So two lessons to doing ANYTHING:

One way to do this is to list out your every aspect of your daily routine from beginning to end. Eliminate one thing not necessary. Add one thing that brings you closer to what you love.

People say to me, “but I’m too old.” “but I already have two jobs”. “but I never wrote a book before”. “but I don’t know how to program”. That’s all bullshit. Cut the bullshit already.

No bullshit for ten days. If the voice comes up, say, “i’ll see you in ten days. Come back then.”

Take a ten day diet from all BS. For me, I’m going to try and finish a book in the next ten days. I hope you like the result.

In a month or so I have an announcement that I guarantee will get people to say, “HE CAN’T DO THAT”. But, what the hell, I’m going to try.

Oh, there’s a third lesson. Always make it fun. Otherwise, you just chose to make one of the few days you have on this planet, not fun. Why would you do that?

That’s it. Your life will be better in ten days.

You know how I know this is true?

Because I’ve done it.

Because A) I’m 100% confident that if a non-English speaker like Claudia can write a script for something then I can get it into the hands of whoever I want. That’s the way I roll.

And B) as of yesterday I’m an Honorary Colonel in the state of Kentucky (thank you Morgan Frankin and Governor Stephen Beshear for hooking me up. You guys are solid!) 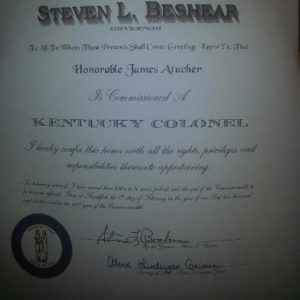