Nothing Is Wrong With You 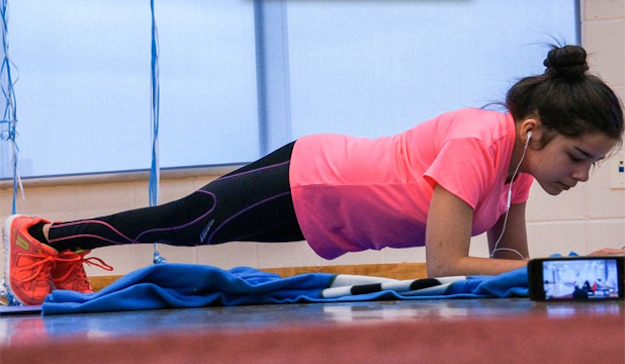 Gabi Uri is missing muscles in her calves and her abs plus she has scoliosis. She’s 16 and has had this condition since birth. Since she was born she’s had 14 surgeries to help correct her condition as much as possible. She walks with a slight limp.

I mention that to set the stage. But first, Google “plank”. It’s sort of like a pushup position but your elbows are also on the ground.

How long can you hold the plank position? Try right now. I’m going to try it. Hold on.

Ok, it took me about 45 seconds before I realized this was a nightmare. And then around the two minute mark I stopped.

You realize when you are doing it that you pretty much need the muscles in your abs and calves.

So here’s the point: in April, Gabi Ury held herself in this position for over an hour and 20 minutes and broke the world record for females holding the plank position.

She spoke before me at a conference last week. I didn’t listen to her talk because it was right before my talk and I was scared to death.

While she was talking I watched Louis CK do standup and I did my trick where I picture the anxious part of me split off from me and stand to the side. Then I waited for Gabi to finish.

When she finished, someone was introducing me so I still had a few seconds.

She walked right into the arms of her father. She hugged him as tightly as possible. I can’t get the image out of my head. Her whole life he’s been there for her.

She broke the world record because someone loved her that much. Because many people were kind to her. Because he cared. Because she cared.

Persistent kindness is heaven. I hope I can be kind all my life.

Her face was buried into his chest and she held onto him for life. He was looking down at her and smiling and he hugged her back. It’s hard at 16 to give a talk to 1300 people. To bleed on the stage. To make people cry and smile at the same time.

I kept watching them hug.

I didn’t listen to the person introducing me until someone said in my ear, “Ok. Go!’ And I was supposed to walk onto the stage.

But it’s rare when you can pull such a love out of this harsh and chaotic universe. I stood there a few more seconds and watched Gabi hug her father.

Her father, by coincidence, has written a book called “Getting to Yes”. Similar title to the book Claudia and I just wrote, “The Power of No”. Someone said to me that it was similar themes.

I do remember the last thing Gabi said before she got off stage. The final moments of her talk.

She said: Sometimes people ask me, “What’s wrong with you?”