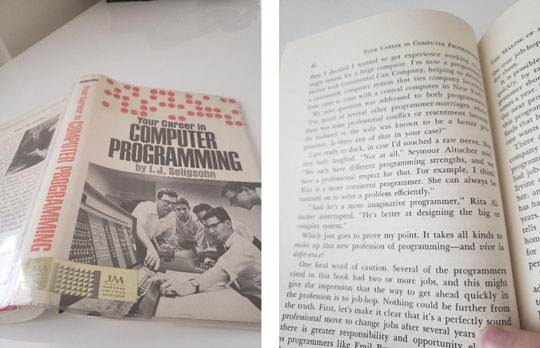 My mother had polio when she was two. When she was four years old she had to have a “birthday party” at the hospital where she was alone behind a glass wall and the other kids were on the other side of the wall.

She walked with a limp for the rest of her life. Kids would ask me at the school bus stop, why does your mom walk so funny? I’d be ashamed and just say I don’t know.

Other companies wrote software for just the Univac or the IBM 366 or the whatever else existed then.

She was the first female programmer in history that wrote software for every type of computer. She is my hero.

And at that company, she met my father.

They were private people (unlike me!). I had to read about their meeting in a book, the classic tome: “Your Career in Computer Programming” by IJ Seligsohn.

Seligsohn asked them if they were ever competitive with each other, because they were both programmers. He then was “ready to duck” just in case he hit a “raw nerve.”

“Not at all,” S. Altucher said, “We each have different programming strengths. She is more consistent. She can always be counted on to solve a problem more efficiently.”

Perhaps because of her polio, my mother never thought things were going to work out well.

When I told her I was going to sell my first company she said, “Maybe just get someone to offer you a job.” And when I lost all of my money she never thought I would make it back.

My dad was the exact opposite. He would have crazy ideas that made no sense and was always sure they were going to make millions.

When his own software company, which he built up for 20 years, went public, he thought he would be a billionaire. He ended up dead broke and the company went bankrupt.

He was too optimistic. He bought all his employees cars. Built a new building. Then went broke.

When we played chess, he’d throw everything at me. Over and over. A massive attack.

Finally, I learned how to defend against him. I started winning every game. “What happened?” he would ask. I’d shrug my shoulders and set up the pieces again.

But one was too optimistic and built a failed company. The other was too pessimistic and would take programming jobs well beneath her skills.

When my dad died, whatever hope my mom had about life was buried with him.

I grew up seeing the dangers of excess optimism and pessimism.

Not everything’s going to go wrong (mom), but some things will go wrong.

And I can’t ask for a million-dollar salary when I’m 23 (dad), but I can always look for new opportunities.

The economy might be bad now (mom), but there’s a thousand ways it could get better (dad).

It was hard for me. I took after my dad too much. I was optimistic. I’d make a lot of money. I’d go broke.

But I became more and more of a realist. Write down 10 ideas a day. Read every day. Build your network. Access your network. Find the future trends.

There’s always opportunity. And with each opportunity there are ways to make money. My dad thought he was brilliant at everything. That was his downfall.

I try to know my weaknesses. To delegate where I’m not strong. To ask questions to people who are smarter than me. To learn learn learn every day. To never rest and say, “all is GOOD!”

To be careful (mom) and test and look both ways and make sure nothing can get in the way of taking advantage of the opportunities that are now in front of all of us (dad).

I’m a realist. And I’m practical. Which means I’m ultimately an optimist.

My father is dead. But I am still alive.