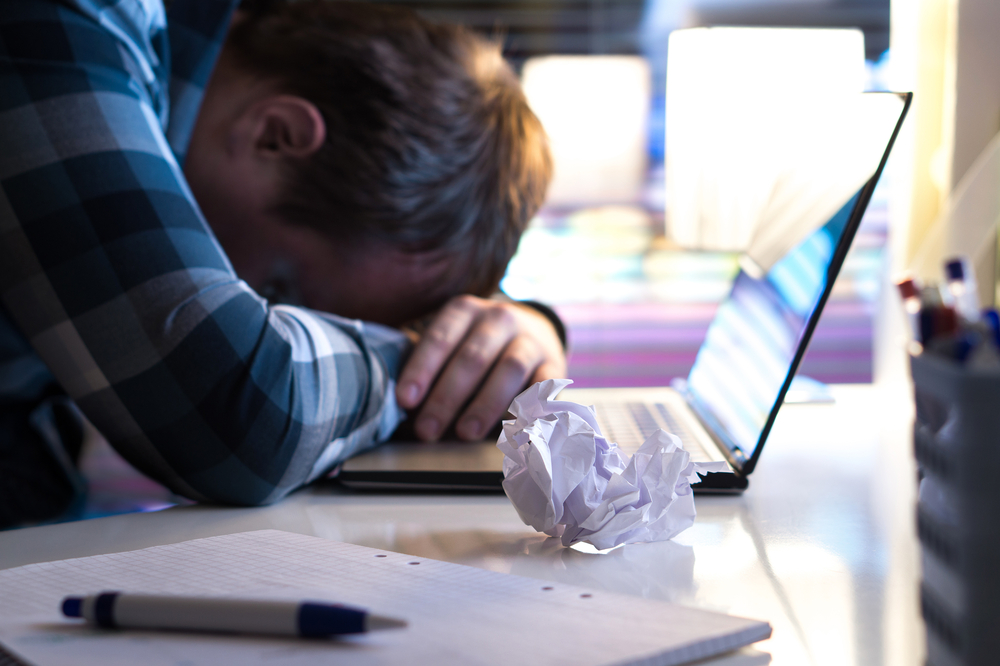 I haven’t written in 24 hours.

I feel sick now. Like my brain is empty. Like maybe my brain has decided it will never write again. Like maybe I’m a failure now. All I’ve wanted to do for the past 30 years is write every day and now it’s finished.

I can’t even feed my kids until I write.

I’ve written every day for the past 20 years. I’ve written 22 books and thousands of articles.

I’m always afraid the flow is going to stop. And often it does.

But that’s when a person has to be a pro. The ideas have to flow again.

[See Also, 33 Unusual Ways to Be a Better Writer.]

I’m just being honest. Who knows if coffee is good for you or bad for you? But I start writing on my third cup of coffee for the day.

I don’t know why it works. But it starts my head spinning.

I always read before I write. I tend to read “dirty realism.” Short stories or autobiographical essays that are mostly true and written by quality writers.

For each person, this might be a different set of writers. I like Raymond Carver, Miranda July, Denis Johnson, Cheryl Strayed, Bukowski, James Frey, etc.

When I read them it’s like I click into their thought process and often get my own “dirty realist” story about my life to write about.

I often can’t start without reading first. But reading has given me hundreds and hundreds of ideas for things to write AND ways to write.

As an example, the other day I was reading Tim O’Brien’s short story, “What We Carried,” about the physical items he and his fellow soldiers carried into the jungles of Vietnam and how they also carried emotional and mental baggage.

This made me think about starting a business. All the emotional baggage that goes into it. Fear of failure or shame of failing. Worries about my family. Fear of clients. Fear of money.

So I wrote about what I carry during my day. Did I copy him? Yes. But premises are fair game.

If I wake up at 4:30, I’m done with reading and coffee by 6, I’m sitting in front of the computer trying to write. Your brain is your slave, not your master.

I don’t always believe that you have to do the same time every day. Sometimes I miss that time. But it helps.

D) START IN THE MIDDLE.

This is the No. 1 technique to start something.

I don’t know. Too many choices.

So I started in the middle:

“And then I got a divorce.”

The reader is put off guard. It’s a risk that the writer takes (risks, well done, will drive the reader forward).

It’s almost as if the reader is being invited into the story mid-conversation. The reader is eavesdropping on a very gossipy story. What will happen next? Why did he get a divorce?

From there, the next few lines and paragraphs are usually straightforward. Basically, I’m digging myself out of the hole I created for myself on that first sentence.

E) START WITH THE BLOOD…

I was writing about my first ever-customer as an entrepreneur the other day.

My first sentence was:

“If you repeat this conversation, I will kill you,” Shlomo told me.

If I am doing my job as a writer, that sentence should lead the reader to wonder: what is the conversation? Is this person serious?

The next few sentences, maybe even the entire story, will flow from that first line.

Another time I was writing about seeing a therapist when I was having nonstop anxiety attacks about money.

“The only thing that will help me is if you write me a check for $1 million right now,” I said to the psychiatrist on my first appointment with him.

When a piece of writing is still inside of you its like a baby that’s growing.

The baby is feeding off of your vitality, your brain, your emotional strength, and over time it grows. If you talk about it, then you’ve given birth.

The energy of the words spills out into the air, leaving no imprint, disappearing.

Give birth on the written page first. Then you can talk about her as she matures.

Sometimes I get hard-core writer’s block. I did my reading , my coffee, my analysis of my big past failures, etc. and I can’t figure out something to write today. I do several things then to look for inspiration:

H) MAKE YOURSELF THE BAD GUY…

If I’m writing about the time I was incredibly in love with someone, I can write, “I broke up with her with a text message to her phone.”

Or if you are writing about how to make money, you can start with, “The worst thing I ever did was steal money from my parents.”

Nobody wants to read a story from the movie star about how great he is. People have flaws. Be honest. Be transparent.

If readers can’t handle it then they shouldn’t be reading.

Make sure you’re not trying to protect yourself. Protecting others is important. Do no harm.

But if you’re going to tell a story, a blog post doesn’t have to make you the hero.

For instance one of my more popular early posts was “How I Screwed Yasser Arafat Out of $2 million.” Right off I said I needed $100 million. Nobody needs $100 million.

Then I described what I would do with $100 million, everything I did to try and get that hundred million, and ultimately what Yasser Arafat had to do with it.

The story told itself. But I was arrogant, foolish, a bad guy, and at least at that time, had no idea what I was doing.

If I tried to protect myself in the writing then there would’ve been no story. So always do an honesty check. Are you saying something because it’s true or because you are trying to protect yourself.

If I have a problem like “I’m angry,” then I have at least two delicious courses that will make a full meal.

Two of my daughters are applying to college this year.

And then I got a letter from the college another daughter is attending, which made me angry. They were asking me for $16.92 because of a broken microwave in my daughter’s dormitory and everyone was sharing equally.

Which reminded me of the day before when that same college called and asked for a donation.

And it doesn’t have to be pure anger.

The other day I was watching a video where a bunch of investors were talking about the “five best investors in history.”

But they were getting facts, history, biographies all wrong. I felt if they were calling themselves experts, they should know more.

So I wrote my own version.

The above 10 techniques have basically produced every article I’ve ever done.

I probably have writer’s block every day. And it honestly makes me feel sick.

My kids know not to get near me when I have writer’s block.

Addendum: These are my go-to writers I often read before writing. Note: This list could be different for everyone. And the list is not strict. I read many other writers besides these but these seem to be consistently the ones who get me out of writer’s block.