Politics Has Nothing To Do With Politics 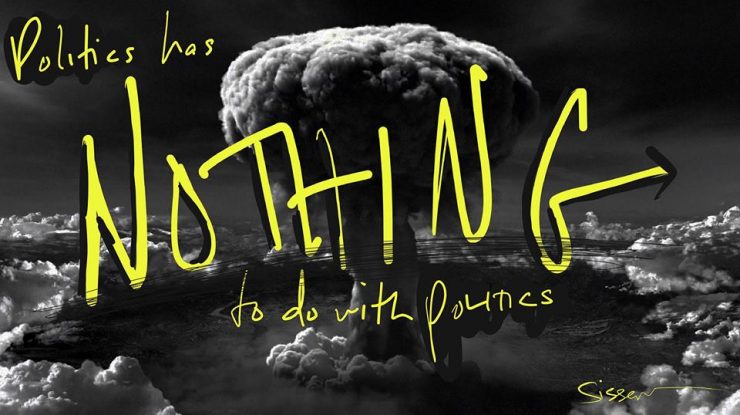 Here’s a conspiracy that wasn’t just a theory.

When “Little Boy” and “Fat Man” were dropped on Hiroshima and Nagasaki – that’s when the rest of the world found out.

Harry Truman said, “We made a $2 billion scientific gamble…and we won!”

250,000 civilians were killed. That was the metric for winning.

65,000 civilians were killed within three seconds of the bomb dropping on Hiroshima.

Each election has to up the ante for entertainment.

The role of politics is to help those less fortunate who might not be able to help themselves. This is a very small part of the population

The role of government can be extended to say: don’t murder people or rob from people.

Since 1992, across three presidents, average salary for people ages 18-40 has gone DOWN from $36,000 to $33,000 while student loan debt has gone straight up, inflation has gone up, healthcare costs has gone up, housing costs have gone up.

Who are we doing all of this work for? Who is making the money off of the value you work hard to create?

They were the only things that didn’t die during the Hiroshima bombing. They are flourishing in Hiroshima today. Politics didn’t destroy them.

Voting won’t stop the tidal wave of politics destroying our species. There are only two gifts you can give that will help society.

That’s how I try to vote each day. But it’s really difficult and I’m just one vote.

P.S. –  But when it comes to general elections I don’t vote. I won’t vote…

I have no political anti-establishment reason for not voting. I’m not an anarchist. I just don’t see why I should vote.

A vote is a choice between two elaborate theatrical productions…

It’s a choice between the aesthetics of Star Wars versus Indiana Jones.

It’s a vote to see which artist more cleverly evokes our mythological and unconscious responses to the perilous world around us.

The median real salary today, adjusted for inflation, is almost 10% lower than it was in 2007.

And average hourly wages are lower than they were 40 years ago, according to recent U.S. News & World Report article.

A salary will not keep your family afloat anymore.

Even two salaries won’t keep most families afloat. The idea of retirement–for tens of millions of Americans–doesn’t even exist anymore.

I want to help people get rid of the non-stop fear that comes with never having economic security.

Here’s what I’m doing to help…