The 11 Things I Do Before I Give A Talk 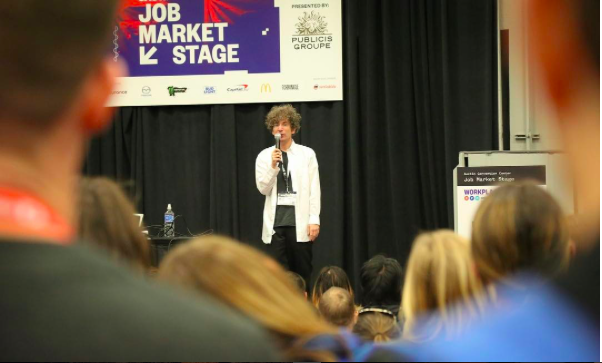 I was going to give the worst talk of my life. I was in Kaiserslautern, Germany for a big conference that had accepted a research paper of mine.

Prakash, my professor, asked to see my slides. “This is horrible!” he said when he saw them.

We found a magic marker and he started redrawing all of my slides. He was shaking his head. I was scared to death. I said to him, “how about you speak tomorrow?” He looked at me and frowned.

“We’re skipping the conference dinner,” he told me. We went to the auditorium instead. He sat in the back. “Give your talk,” he told me.

“Explain what you mean. Nobody will understand that.”

“Move around the stage more.”

“EXPLAIN! I don’t even understand you.”

I gave the talk maybe ten times or more.

The next day I gave the best talk I ever gave.

(at this year’s AirBnB Open)

One time I had to speak at a TEDx conference and I was so scared I thought I was going to just walk out of the building and never come back. About ten minutes before I had to speak.

Before my talk was an amazing woman who described disabilities she had since birth and how she overcame them. After my talk was going to be a performance by the San Diego ballet.

I was doomed, I thought. I had nothing worthwhile to say. I was a piece of s**t.

I went downstairs and I started to cry. A 46 year old man crying. I couldn’t do it. I had practiced. I had given the talk earlier in front of a speaking coach. I had been to the rehearsal and gave my talk there.

But still….I wanted to quit. And yes, I was crying. I didn’t want to live if I had to give this talk.

I remembered this one technique:

Pretend there is a scared nervous version of yourself inside of your body. Say hello to it.

Picture what he looks like. I pictured this tinier version of myself, with the acne I had as a kid, and the oversized glasses and the uncombable hair (even more uncombable than now).

And I walked on the stage and I pictured him walking behind me.

It’s true, I felt enormous energy then. I went onto the stage. I made my first set of jokes. I told my story. I made my points. Everyone was laughing. Everyone clapped at the end. Afterwards, even the speaking coach congratulated me.

I felt good. I was happy I didn’t quit.

Another time I had to speak in a contest. Whoever delivered the most value (the audience was voting) would win $30,000.

They were all great speakers before me and after me.

Before my talk I was so nervous I suggested to the conference organizer I just do a Q&A but he said “No”.

I left the building and I called a professor I knew who specialized in cognitive psychology. I told him about the contest. He gathered some of his students in the room and put them on the speaker.

They all started shouting ideas. “To win, you only need a few extra votes. Give everyone in the audience a dollar.”

“Address everyone by name.”

They all cited various cognitive biases that would help me.

I gave the talk and I felt good about it. I didn’t win the contest because I don’t think I provided the most value. But everyone laughed. Everyone remembered it afterwards and I got many nice emails.

[ RELATED: How To Be THE LUCKIEST GUY ON THE PLANET in 4 Easy Steps ]

One time I had to speak at a conference right after Julian Assange, from WikiLeaks. He was skipping in from the Ecuadorian embassy in London.

How could I walk on the stage after that? Everyone would be texting their friends back home that they had just listened to Julian Assange.

I thought about it for a long time and then I got an idea. This was in early 2014 and even the other day someone reminded me of what I did next.

I pretended to be talking to my wife on the phone while I was walking on the stage.

So I turned around and threw my phone as hard as I could against the floor. It smashed into thousands of pieces. Then I began my talk.

While I was talking, a janitor with a giant ten foot broom walked behind me and swept up all the pieces. Everyone was laughing. The talk went great.

Afterwards, the comedian Paul Reiser spoke. They paid him $50,000. They had paid me nothing. The guy organizing the conference told me, “We should’ve skipped him and just stopped with you.”

I’ve spoken at ten events in the past few months. I have two talks in the next week.

Here’s what I do to prepare.

Starting about 48 hours in advance of the talk I watch as much standup comedy as I can.

Not because I want to steal jokes.

But because they are the best public speakers. They use the whole stage. They make faces. They inflect their voices. They engage the audience. And they are funny.

My mirror neurons kick in. Just like you can learn to climb a ladder by simply watching someone climb a ladder, I learn how to be a better public speaker by watching comedians.

My go-to comedians before a talk (and it changes for every talk):

I do prepare several jokes to start off the talk. And I also have jokes prepared for the middle of the talk.

Adults are not used to laughing. A child, on average, laughs 300 times a day. An adult…five. Get people to laugh and they will remember.

People get bored in ten minutes. You have to change the subject, or get audience participation, or do a joke, or do something drastic, every ten minutes to keep people interested.

When you divide the speakers into “the other” and “you” then you take advantage of a cognitive bias called “ambiguity bias”. So I make sure to thank “the others that have to talk” and get everyone clapping.

This puts a fog-like confusion in everyone’s head. Who are “the others”. It’s one amorphous group. they can’t remember. There is just you and the others.

E) USE THE WHOLE STAGE

Move around. Nobody wants to stare at one spot the entire time.

When I finish a story. Or make a joke and people are laughing, I pause. Pause to the point where everyone is uncomfortable.

I don’t know why this is good. It just works somehow. People continue laughing.

Stories have a beginning, middle and end.

Stories have a reluctant hero, who is forced to take action, who encounters a set of ever increasing problems, who meets a whole cohort of people who will help him, who then solves his or her biggest problem, and then comes back to tell the tale.

it doesn’t matter if it’s a talk, a single tweet, or if it’s Star Wars.

You have to tell a story. And, in one form or other it has to have the Arc of the Hero, described above.

Magnus Carlsen is the word chess champion. He defended his championship a few months ago just down the block from where I live.

He was in a desperate situation. He kept almost winning, and then the other guy, Sergey Kajarkian, would fight back and get the draw. So the match was even.

“Magnus’s coach is going to have train him to win these winning positions,” said Judith Polgar, who was analyzing the game.

Then, in the final game. With seconds to go, Judith gasped. “Oh my god,” she said. “So beautiful”.

And then seconds later Magnus played a three move combination that looked as if he was losing his queen by accident. But no matter how Sergey would take his queen, Magnus would have checkmate one move later.

The unexpected. Nobody would look at giving up the most powerful piece on the board. And he won the world championship. “What a great birthday present this is,” he said afterwards, since it was also his birthday.

Make sure you always have the unexpected.

People who stutter don’t stutter when they sing.

That’s because the “singing part” of the brain is different from the talking part of the brain.

I want all parts of my brain involved in verbal expression to be on fire when I go on stage.

So even though I don’t sing at all, I practice memorizing songs and then singing them before I go on stage.

It helps my memory, it activates a part of my brain I don’t normally use, and it makes me feel like a performer.

My go-to songs? I don’t know why this is but I always practice two songs that are 1970s TV theme songs: “Welcome Back Kotter” and “Chico and the Man”.

For me there is also a nostalgia in those songs. Nostalgia from when I was a kid and I loved these shows. A time when I had no worries. And the songs were so beautiful to me. But I always forget the words.

I memorize them and sing them over and over in the 24 hours before I give my talk.

I don’t use slides. A brain is not meant to multi-task. They are either looking at you, or the slide. Not both.

I want people to listen to my talk.Not watch a bunch of slides. This isn’t always possible depending on the talk but I now try to prepare my talks so no slides are ever necessary.

People will remember me and not a slide.

Usually before a talk there might be breaks or a lunch or a dinner or whatever.

I always try to mingle and get to know the audience and talk to as many people as possible and see what they are aiming to learn and hear.

The people I speak to before the talk will always clap and laugh during the talk. I recruit my allies in advance.

Do I always give great talks. No. Definitely not.

But I always give my best. I prepare. I rest. I get to know the audience. I have lots of stories I tell. I watch comedy. I sing. I bring my weaker, scared version up with me. I thank “the other”.

Then I go on stage and have a great time.

After that very first talk, when Prakash was coaching me for hours the night before, I was in a glow.

Afterwards, Prakash offered me one more bit of advice. It was night and we were walking back to our respective hotels.

We went our separate ways. A year later I left graduate school. We never saw each other again.

But I’m grateful he taught me how to speak.