The Ten Most Important Aspects of Reinventing Your Life 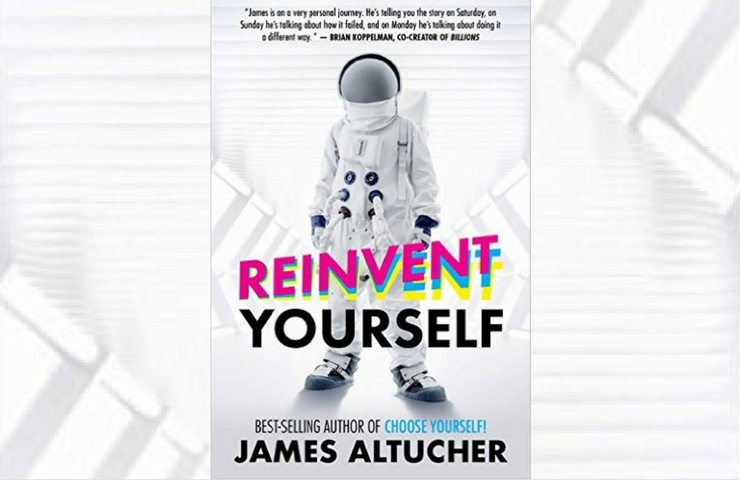 I wanted to write the book that 20 years ago I wish I had read.

That ten years ago I wish I had read.

That five years ago I wish I had read.

That yesterday I wanted to read.

So today I published it. “Reinvent Yourself.”

When I turned 40, a friend of mine threw a birthday dinner for me. He invited all his friends. I knew none of them.

So on my 40th birthday I was basically by myself, with people I didn’t know, doing nothing in my life that I had ever wanted to do for the prior 40 years. I hated my life.

And, as usual, I was going broke, getting divorced, and scared out of my mind.

Anti-depressants didn’t work for me so I gave up on them. Meditation didn’t work. I couldn’t keep my mind from racing all the time.

I had nobody to talk to. Nobody to turn to. I was lonely and scared and wish I had just one person I could love and say, “Help me.”

Why was this happening to me AGAIN? What didn’t I know about reinventing myself so I could finally get “started”?

I had so many passions as a kid. So many dreams of what I could mold my adult life into.

But first…always “but first…” and those firsts turned out to be distant seconds.

People ask me, “Do you ever get embarrassed revealing so much personal stuff?”

I would be embarrassed if I didn’t reveal personal things in each article.

When I talk to people, I want them to reveal to me also. So who am I to ask a hard question if I don’t come forward and answer them first.

I’ve spent the past six years asking a lot of hard questions. I ask them to the people I meet. To the books I read. To myself.

I’ve reinvented my career 14 times. I’ve gone from barely making ends meet doing things I hated, to loving the work I do now every single day.

After talking to hundreds of people and reading probably 2,000 books trying to figure out how people reinvent their lives to achieve their dreams, I wrote the book I wish I had read in the very beginning.

This is my biggest book. And you don’t have to read it. I’ll summarize right here the basics of what I’ve learned.

First, the world is changing. It’s not a good thing or a bad thing. But your life is going to change with it.

94% of the 15 million jobs created in the past eight years are either part-time or freelance.

The job landscape is changing. Corporatism, which ruled the world for 100 years, is ending.

Technology and necessity have taken each industry, destroyed it, and then created 1,000 new and different ways to succeed in it.

Understanding what is new in the world is the LAST step in reinvention though.

A) Reinvention is a Habit.

Every day we are reinventing. A river doesn’t stay still. Every time you step into it, it’s a different river.

You and I are that river. We either move forward or we freeze like ice.

B) The One Takeaway.

You’ll learn and make use of 1000s of things year. And your set of knowledge will be unique.

Everything I read or listened to or asked or learned, I said, “how does this bring me forward in my own reinvention”. I answered that question and put each item in my book.

Meaning is the building blocks for motivation.

Spend an hour, spend a day, spend a month – write down the things that give you meaning.

What is the “meaning” that can drive you forward today. That can help you survive the worst circumstances (as both Frankl and Ariely have).

Everything in life is contagious.

Make sure you are infected with the secret special super man virus that propels you each day to live a better life than the day before.

I was taking to Mike Massimino, who has been into outer space on two missions, including fixing the Hubble telescope.

He told me that among his ten classmates at MIT, four became astronauts. The odds of this are billions to one.

This is not luck. This is how you create luck.

Someone asked me earlier today: “How do I reinvent if I am starting with no money.”

Let me tell you something: Almost every time I have ever had to reinvent, I started with nothing.

I get out the waiter’s pad and I start writing ideas. I exercise the idea muscle every day. I become an idea machine. I use those ideas to help other people, to build my network, to write articles that further my sense of meaning.

Ideas have saved me from bankruptcy on five different occasions.

E) What are your five?

I write every day. I do something for my podcast every day. I think about investing every day. But there are other things I want to reinvent in.

I used the techniques described here to try and get better at the above three things each day.

And then the next two, which are currently giving meaning to my life, and which drive me forward each day.

I don’t think about ANYTHING ELSE. Otherwise, it’s too scattered.

But, who knows, the sea of the world changes and next year will be a different five. That’s reinvention.

Ultimately, I want to be a better person than I was yesterday. Change doesn’t happen with a vote. Change happens only inside of you.

Angela Duckworth, in her excellent book, “Grit” talks about the difference between the high IQ kids and the ones who eventually succeed. It’ not about intelligence. It;s about how they overcome a setback and keep going

Carol Dweck talks about this in her book, “Mindset”.

Ice Cube talks about this in the movie, “Straight outta Compton”.

Dan Harris talks about this in his book, “10% Happier” when he describes a drug-induced panic attack on live television and how he came back from it.

Tim Ferriss talks about it in “Tools of the Titans” when he describes his one-time feelings of suicide and how he continually bounced back.

Brian Koppelman talks about it when he described to me how he wanted to leave the music business but he had to figure out how to start from scratch in the movie business. “Write what fascinates you” he told me.

But it’s not about writing. Do what fascinates you and no matter how many times you are pushed back by the bullies of life, you will be able to pick up and work your way around them.

The bullies stay stuck and negative. You’ll forget about them and find the shiny objects in life that were so fascinating you couldn’t stop.

G) Do the Unexpected.

I watched Pamela Sisson create the cover for my book. She put about 100 books in front of her. I would say, “That looks good” and point at a book.

Magnus Carlsen won the recent World Championship Chess match only by making the moves nobody else would expect.

Pope Francis doesn’t live in the palace in Vatican City. He lives…in a studio apartment down the street. And makes phone calls to random letter writers.

Bob Dylan, Andy Warhol, Elon Musk, kept saying: what has nobody done that I can now do. Elon Musk, up against NASA and every world government, learned from books how to build a spaceship.

The Unexpected is the God of Reinvention. It’s hidden in between the spaces of everywhere. It’s the secret train that goes to the magical school of Hogwarts.

I want magic in my life.

Take two things. Take three. Combine them. Now you are the best in the world at the intersection.

Ryan Holiday told me about MMA instructor Frank Shamrock who said everyone needs a Plus, Minus, Equal to learn.

PLUS: Someone to mentor you (real or virtual)

EQUAL: People to challenge you.

MINUS: People to teach. Because teaching solidifies your learning and students have their own unique ways of challenging you.

Every example, 100%, of reinvention I researched had a plus, minus, equal.

Nobody reinvents while sick in bed, hanging out with people who are no good, not exercising their creativity muscle, and not being positive in the face of almost certain failure.

The daily practice I’ve written about before but add one thing: get 1% better at each aspect of health each day: physical, emotional, mental, and spiritual.

Compounded, that makes you 3800% better each year. It works.

I want to do new things this year. I want to be great at things I haven’t even started yet.

Reinvention is scary and hard and wonderful and exciting at the same time.

I wrote the book that 20 years ago I wanted to read.

I wrote it. But today it comes out and I finally get the chance to sit down and read it.