How I Made Millions Being a Blood-Sucking Leech 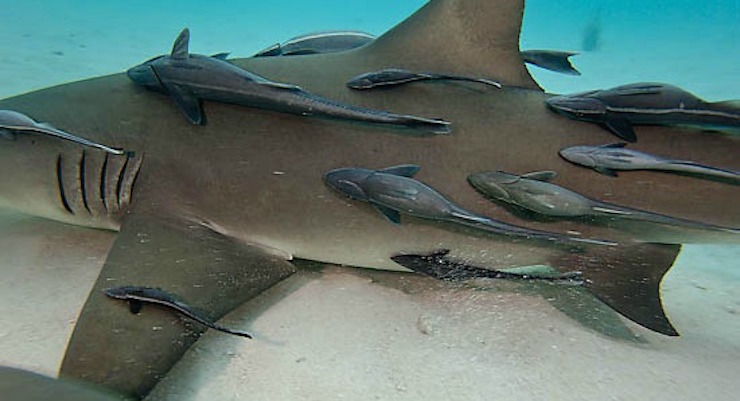 I was having breakfast with one of the biggest hedge fund managers. He was telling me his latest ideas. Then he stopped chewing and said, “you know what. You’re a remora.”

I didn’t know what that was. The food was practically spitting in my face. “A remora is a fish that is a blood-sucking leech”.

But he added, “But I mean it in a good way. Some guys just follow me into stocks, don’t give me credit, and get out as soon as possible.”

I was quiet then. Because, to be frank, it’s exactly what I plan to do.

I get calls from startups every day asking me to invest money in their company.

Most of the time I don’t invest. I have a huge checklist about who I invest in. And it’s eerie: when I don’t check one of the boxes, I lose money. When I follow the checklist, I make money.

Like the time I invested in Optimal, which was acquired by Brand Networks a year later (after they also asked me to be on their board of directors).

But the average investor isn’t able to be an angel investor, or privately invest in a company before it goes public. But that’s ok. The private world of investing is flooded.

It’s the public companies now that I’m interested in. This is where the opportunity is. One of the biggest hedge fund managers in the world just announced he is going back fully into stocks. “This is the time.”

When I am investing, I like to look at what I am going to call remora companies.

These are companies that leech onto larger, household names—like Apple, Google, and GE. And, on top of it: I’m going to follow the super-hedge fund managers that are also quietly going into these smaller remora-like companies.

As these large companies (like Apple) become more popular and investors flood to invest in them, forcing the stock price up, the smaller remora companies get to enjoy the ride up as well. But until now, it’s only the big funds that have benefited.

You see, when large companies produce their products, they don’t create all of the parts that go into them. They outsource many of the pieces to other, often smaller companies.

Apple, for example, doesn’t produce the glass it uses in its iPhones; it outsources that part to another company. But that company’s earnings might go up 10x faster than Apple’s because they are where the real margins are at.

Investors are often slow to react to these remora companies, giving us an advantage for investing.

Let’s take a look at a couple of past examples:

Skyworks Solutions (SWKS) is a company that builds semiconductors for Apple, Samsung, and other major phone makers.

Every time somebody purchases an iPhone (over 34,000 are sold an hour), SWKS profits.

If you had invested in this remora company when Apple announced they would be supplying chips for the iPhone 6, you would be up over 75% on your original investment.

If you had invested in Apple during that same time, you would only have gains of a little over 25%.

Ambarella (AMBA) is another stock that builds semiconductors. They supply them to companies like GoPro and Amazon (for their drones).

Since I recommended them back in August of 2014, their stock price has increased by over 200%.

In late 2013 and early 2014, Target and Home Depot were hacked and hundreds of thousands of their customers’ credit card information was stolen.

Just in the last month, the “dating” website Ashley Madison was hacked, along with over 30 million of its customers’ personal and credit card information.

These hacks force every single public company to up their network security in order to keep good faith with their customers. These companies don’t build this security in-house though—they outsource it to professional network security providers.

This is where we find our next remora companies.

After the security breaches in Target and Home Depot, if you had invested in Palo Alto Networks, you would be up over 230%.

Another remora company that provides network security is Fortinet, which has risen more than 140% since the data breaches in late 2013.

You’ll often hear financial analysts telling you not to invest where everyone else is.

Even Warren Buffett said, “You can’t buy what is popular and do well.”

But, you can do well if you look closer.

Find what is popular and look towards the fringes. Look for these remora companies that will profit from the popularity of their larger buyers and you can be successful.

Bob, I’m sorry you think I’m a remora. But I’m glad you still pick up my phone calls.