Secrets of the Accidental Entrepreneur

I was in a meeting with Uri Geller. You know who he is. He’s the psychic that bends spoons. He’s been doing it since he was a kid. Marvel Comics even did an issue once where Uri Geller was helping out Daredevil. The cover has Daredevil wearing an extremely tight uniform where you could see the outline of his genitalia (putting it delicately for SOPA Nazis). Daredvil was swinging around punching people while Uri Geller (“the Most Shocking Guest Star of All” according to the cover) was melting tanks. 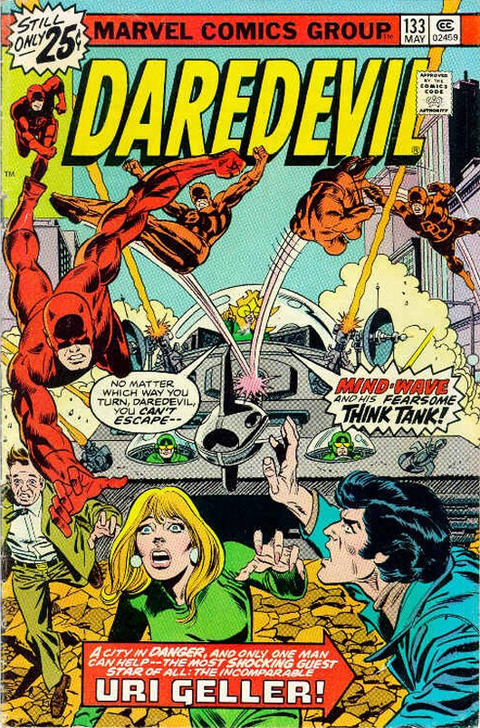 So now Uri Geller was sitting right in front of me pitching a business.

That’s the way I roll.

First there were the demos. Uri (“call me Uri”) gave me a 3×3 piece of paper and a very squeaky magic marker. I made two lines and a bunch of squiggly lines. All sqeaking very loud. Try to imagine how they would sound. “A tree!” he said with his eyes closed. He was right. Then he took a letter opener and we stood by the heater in the office. He rubbed it very hard until it started to bend.

An entire website on how to generate psychic powers. Including, he said, a big button in the middle of the page that if you kept pushing it, it would increase your potential to have psychic powers.

It’s a free country. He’s allowed to pitch me that idea. I don’t know whatever happened to it. Most ideas don’t work. Clearly he didn’t become the next Google.

In fact, Google almost didn’t become the next Google. They tried to sell to Yahoo for $1 million and they were rejected. So they were forced into actually making a business out of their pet project. And it took them four years to find a business model that worked. And to this day it’s still the only business model that works. (Feel free to argue with me about this. I won’t respond).

Groupon almost didn’t become Groupon.  They were originally “thePoint.com” and they were focused on raising money for charities. I don’t know how they raised the money to do that. The idea was that once enough charitable people would be willing to donate, the charity would get the money. ThePoint, I guess, would get a cut. I once pitched something similar to the CEO of one of the two largest media companies in the world. His instant (and only) response to me was, “Charity sucks! What else do you have?”

So Groupon had charity and, of course, the CEO of the media company had been right. Charity does suck and the Point was probably going to go out of business. Instead, they sent out emails for anything, not just charity, and guess what!? It’s now a $14 billion market cap company three years later. Magic!

(I applaud the CEO of Groupon for doing yoga)

Yelp started as an email recommendation service before they became a more general review site. Twitter started out as a phone-to-podcast service (called Odeo ) that then turned into a way to SMS your friends  (called twttr ) that finally became Twitter. All of these companies were accidents.

And, like most accidents, I’m sure there was a lot of blood, a car upside down in the woods, ambulances, flares in the ground to keep out traffic, and policemen with blowhorns yelling, “keep it moving, people. Nothing to see here.” And meanwhile, Jack Dorsey, trying to turn Evan Williams’ little podcast thing into the best thing that ever happened to Charlie Sheen.

Accidents happen. My two best investments at the moment are two accidents. They started as one thing, and after much agony later, ended up as something completely different and better. It takes a special person to survive these accidents. In other words, nobody, and I mean NOBODY, knows what’s going to work in advance. An abililty to see the future makes Uri Geller famous but does not make a successful entrepreneur.

Many of these accidental successes had an “oh shit” moment where it seemed like everything was going to fall apart, they had to come up with a way to transition (I hate the word “pivot” –its very February, 2011) and then they figured out a way to flourish and get over the hump.

Uri Geller didn’t have what it takes. I don’t know what happened to his online company. I’m not even going to Google it right now even though I can. It magically disappeared as far as I’m concerned.

(Geller and Jackson, and I guess me, were all friends)

But the accidental entrepreneurs mentioned above had it. The combination of luck, health, and flexibility that allows one to roll with disappointments, learn from them, move forward, and repeat when necessary.

Train your body, mind, and soul before you jump into your startup to be able to handle the following:

(the Google logo on Halloween – EVIL)

If you can handle all of the above and still retain health and sanity then you are probably ready to start a business. Uri Geller could bend spoons, melt tanks, and be friends with both Daredevil and Michael Jackson.  But he probably doesn’t have the magic powers you have. And he never will.

See, “The Hundred Rules for Being an Entrepreneur”.