Seven Reasons Not to Go to College (and a Solution) 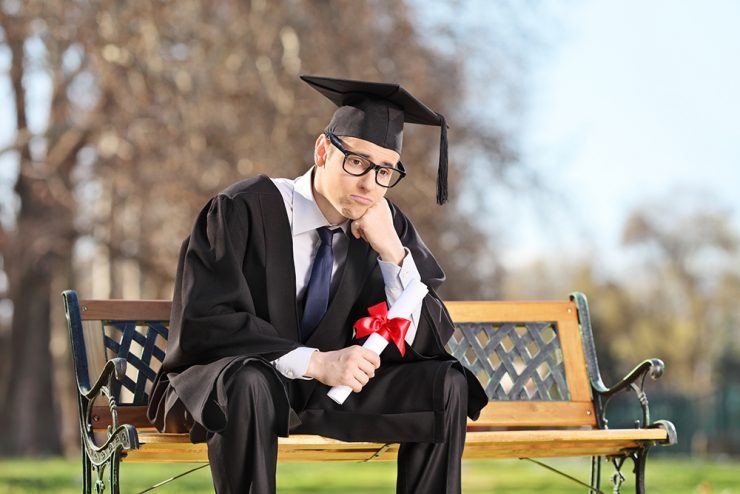 I desperately needed to skip a year of college.

I paid for my college. I borrowed too much money.

THEY WOULD NOT LET ME GRADUATE!

I went to a professor in a class (Fortran programming) where I had gotten a D-. I begged him to change it to a D+. I BEGGED. I think I cried.

I can’t remember anything I learned in college.

I majored in computer science. When I actually got a job doing real programming I was so bad I had to go to remedial classes to catch up to the worst employees at my job (at HBO).

What about the “liberal arts”?

I got obsessed with writing and reading only after I graduated college.

In my 20s I probably read a book a day and that’s when I started writing 3,000 words a day. A habit I continue even now. I’ve written 21 books and thousands of articles.

Most of them not so good but some of them good. “Great” is the enemy of “better.”

“Degrees” and “education” are different.

Life is the curriculum.

Not a list of courses being offered by aging tenured professors with increasing salaries coming from your increased tuitions paid for by increasing student loan debt.

Get a skill. Screw a degree.

7 REASONS NOT TO GO TO COLLEGE

My daughters tell me you need a degree to get a job. Not true. You need skills. You get skills ONLY by working in the real world. Internships, beginning jobs, etc.

One time I interviewed a kid who went through the entire MIT online curriculum (which has homework, tests, etc.) in one year.

Instead of the four years required to get a degree. He had the passion, so now he has the skills.

Companies like Google have already announced they are looking at skills instead of degrees. Many more companies have announced this.

People say, “This is a great way for kids to be social at this age.”

Even I know how to make friends.

Price is a function of supply and demand (thank you economics 101).

SUPPLY is limited by the number of accredited colleges.

DEMAND is ARTIFICIALLY INCREASED by the government backing student loans.

So tuition is ARTIFICIALLY INCREASED.

More proof? Why does the president of Quinnipiac College make $3,500,000 in salary?

Why are student loans the one type of loan you can’t get rid of when you declare bankruptcy?

Answer: Because the government understands biology.

The prefrontal cortex is not fully grown until age 25 or greater. This is the part of the brain that makes nuanced adult decisions about risk.

In other words, by definition, 18 year olds are mentally ill. Their brains are deformed.

The government takes advantage of the deformed brains of unqualified adults.

Forget college for a second.

John goes somewhere secluded where he learns basically nothing for four years.

Alice wants to be an actress. She moves to the big city. She auditions for a year. Hates the lifestyle so quits.

But then interns at a PR firm. Represents actors because she knows the business very well after all of that auditioning.

Within three years (four in total), she has risen up and has a high-paying job and a good list of clients.

John took on a lot of debt to live his lifestyle and now is a salesman at an eyeglass store.

Alice is ready to start her own PR business and then sell to a larger one for millions.

John pays back 50% of his salary to his bank. He is stuck at the eyeglass store.

(Alice and John are fictionalized names based on two very real stories.)

“But you get connections in college.”

All of those questions came from me trying to provide value, being persistent, having integrity, and building up bit by bit, even through failure, every single year.

The rich don’t take out loans for college but the poor do.

Rich people marry other rich people and have rich kids. Then the divide between rich and poor gets greater.

The students with the most debt can no longer start companies, create jobs, create the innovation America is known for.

Most people who shout about “income inequality” are probably college educated, not realizing they are part of the problem.

Why were colleges created?

Not to educate people.

Colleges were created and were surrounded by guards.

In the Renaissance, kings knew that violent crimes were mostly committed by young males, ages 18–22. So they sent the young men to college to “learn.”

But the guards were LOOKING IN. Not looking out. They were keeping the young men at the school so they couldn’t escape and get back to their violence.

1) INCREASE SUPPLY: Make online universities accredited so they can give out degrees. This will reduce costs, save time and focus on skills vs, degrees. Will also reduce the artificial value of “brand” in education.

2) REDUCE DEMAND: I get it — there are very good intentions when the government backs student loans.

But the damage is unmistakable. 22 million young Americans are paying debt their parents never had to deal with. It’s a national disaster that is destroying every part of the American economic system.

Heck, let’s go the other way: Give tax incentives for companies to hire skilled people without degrees.

BOOM! Problem will get solved.

It will take a decade or two but entire industries will rise up, people will get more skills, income inequality will be reduced, and America will get back on top with innovation.

I’ve lost friends over this argument. People thinking I am questioning their life choices. I feel so bad when people who were my friends start to dislike me.

But, Kathryn, I’m sorry this upset you so much. Please be my friend again. PLEASE!?

Although I guess I shouldn’t beg for friendship.