Some People Were Upset At Me

Real conversation between two traders, July 5, 2010 (about a year ago):

The conversation took place on Skype, 8am:

The characters: LARRY is a retired hedge fund manager. JULIE, manages a billion in assets for an institutional money manager. JULIE called LARRY…

JULIE: Are you watching this on TV? Aren’t you friends with that guy?

LARRY (reluctantly): Yeah…what about it?

JULIE: Your friend sounds like a jackass. He sounds mentally ill. Nouriel Roubini is one of the smartest guys on the planet, an economist, he called this economic downturn. Your friend is just sitting there smiling like an asshole. Why is he disagreeing with Roubini? How come he can’t get that smile off his face? 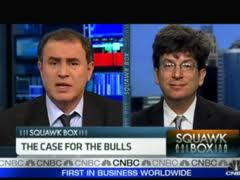 LARRY: Uhh, maybe he’s happy? But I know what you mean. He’s a bit crazy.

JULIE: Crazy? He’s a raving lunatic. He sounds like he’s got a mental disability. Is he autistic? And that’s even being mean to autistic people. Seriously, why are you even friends with someone like this?

LARRY: Come on. It’s not that bad. He might be a bit extreme but so what?

JULIE: He’s telling people the market is going up. People are going to lose all of their money. He’s a jerk. And what’s up with the way he looks?

LARRY: What do you mean?

JULIE: What’s up with his hair? Doesn’t he comb it before going on TV? Are they letting homeless people on CNBC now? Nouriel is dead on here. How can he argue with Nouriel?

LARRY: You do realize Nouriel has a giant painting of vaginas all over the wall in his living room?

JULIE: I’d love to go to a Nouriel party. But seriously, Nouriel has called this entire crisis and your friend is a nobody and now your friend can’t stop smiling while he tells Nouriel he’s dead wrong. How can your buddy even think that? Doesn’t he know Economics 101? Did he even graduate nursery school?

LARRY: OK, OK, You’re right. He’s crazy. He’s mentally disturbed. His hair is a mess. And I don’t know why CNBC puts him on.

JULIE: You’re just trying to get into my pants now. (she chuckles flirtatiously)

LARRY: I’m trying to get into every girl’s pants with as little effort as possible. If saying James is crazy will do it then I’ll say it. He’s a raving lunatic.

Later that day, I got home from CNBC. I was feeling sick because I had been so nervous. I had been shaking all through the segment.

Nouriel was so determined in saying the market was going down 20-30% and I was convinced that the media and the newsletter writers and the economists were all trying to spread fear just so they can keep their own businesses going a little while longer.

I wanted to help people be optimistic. But the market had been going down for three straight months. Maybe I was wrong. I was afraid to let people down.

Everyone has had a very hard decade. 9/11, Enron, Housing crisis, Financial crisis, etc etc etc. Not many people have been very happy with the results of this decade, including me. But we have to continue to innovate, provide for our families, and not let the greed and fear that the media and the economists foist on us scare us out of our sanity.

Maybe you weren’t loved enough as a kid. Or you are unhappy in a relationship. Or whatever the cause of your unhappiness is, it’s too easy to take it out on the people who put themselves out there, trying to be honest with no ulterior motives or agendas.

But that said, on July 5, 2010, I was constipated and feeling sick to my stomach when I got home from CNBC.  My stomach was hurting worse than usual. I drank some coffee and a lot of water. I went to the bathroom. Brought in the comic book “Genesis” by R. Crumb. Must have gotten all the way up to Abraham before taking care of business.

Then suddenly the world felt much better. I sat outside by the river and read the rest of Crumb’s Genesis. And I was able to enjoy the rest of the day.

Update #1: The market has gone up 25% since then. Julie might be living in a motel on the west side highway now with random ads in Craigslist advertising her financial services.

Update #2: I don’t mean to be financial at all on this blog. But this one conversation, as relayed to me by Larry, I wanted to get off my chest. And I guess I’m being mean about Julie, a woman I don’t know.

When Larry told me the conversation I was at first upset at him he didn’t defend me more but why should I care if he defends me to someone I don’t even know.

Update #3: Peter W. from CS First Boston wrote Nouriel and me after the market began its move up and said, “Nouriel, you have to at least invite James to a party.” Nouriel replied, “When there’s a double-dip recession I’ll invite him.”