I stole about $15 from a guy on my paper route. I forget the exact amount. He accidentally gave me the wrong bill as a tip. Instead of giving me a $5 he gave me a $20. The details aren’t important. I was a privileged middle class kid living in a suburban neighborhood and I had a paper route, an allowance from my parents, an allowance from my grandparents, and I regularly stole money from my dad’s wallet. Not to mention I dipped into the bank account that had my college savings in it whenever I really needed to make a serious purchase. Like a sweater. Or comic books. Without telling my parents who were depositing money in there to afford my college. 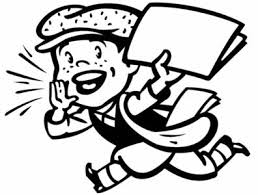 So now I had this extra $15 and I felt like I had earned it. Wrapping up papers every day after school and then riding around on my bike throwing the papers at the porches for 2 hours until the sun went down was finally worth it. The only reason I was doing this paper route was because of first Christine Cardinal, then Beth Mosesman, who lived on my route. Both of whom said “NO!” to my clingy advances although a bit more politely than that. The only other thing about that is Beth’s sister ruining our Dungeon’s & Dragons game by constantly making out with David Bender on the table with all our stuff on it. You can’t be a Chaotic Evil Elf Ranger with some girl making out on the Dungeon Master’s notes. Our weekly game disintegrated and none of us remained friends.

“Let me see that,” my dad said, and I took the bills out of my pocket to show him. Proof. I was making money. When I needed money, I made it. That’s the way I thought.

“Just get in the car,” he said and he was very firm. I was a little scared. I never disagreed with my dad. My two daughters disagree with me all the time. I could yell at them and spit at them and they would just sit on their computers and ignore me. There’s some new “Facebook for Kids”. They are already sucked into virtual worlds that I can never be a part of. And they aren’t old enough to know what money is. How money stabs and hurts but you can also imagine bathing in it, perfuming yourself with it, having sex with it. They don’t know about any of that yet.

I got in the car. Mr. So-and-So worked for the State of NJ procuring computer systems. My dad sold software. Potentially Mr.So-and-So was a client.

We’re driving along and it suddenly occurred to me what was happening. I felt the fear right in my chest. I was Jesus being hung up on the cross. My dad was going to sacrifice me.

“Mr. So-and-So is a potential client. Maybe he gave you that money to test you, to test me. You are going to give that money back.”

“You are doing it. I’m dropping you off there and I’m going to wait in the car until you do it.”

We got there. I wouldn’t get out of the car.

“We’re not moving,” my dad said. “You need to be honest. You have to return the extra money.”

“We’re not moving from here until you do it.”

So I got out of the car. Rang the doorbell. Mr. So-and-So’s son answered. He was a year younger than me at school so we were kind of friends. “Is your dad here?”

“Uhh, yeah.” We had plans to maybe play in a band sometime together. He wanted us to get together where he would play guitar and I would play some sort of keyboard. It never happened. Nothing like that ever happened.

“Actually, when I got home I realized you accidentally paid me too much.” I hope that sounded like the truth. Like somehow I must have divided up all the money into little envelopes for each of the 100 houses I delivered to and then realized his envelope contained too much money.

And I gave him back the money.

“Don’t you feel better,” my dad said when I got back into the car.

The next day when my dad got home from work he said, “Mr.So-and-So called me and commented on how honest you were.” I guess I felt good then. I didn’t want my dad to think I was dishonest. Or dishonest with his clients. I wasn’t completely sure what the lesson was.  And now he’s dead and I miss him.

The next day was business as usual. I wrapped up the papers. I had a bag and I would throw each paper on the porch. If the paper missed I’d go, get it and put it carefully on each porch. Some guy in a suit driving past pointed at me and said, “you’re going to rule the world some day!” Because I guess there’s a long tradition of paper boys later on becoming the Emperor of the World.

With Beth Mosesman’s house I never just threw the paper on the porch. I would ring the doorbell. She had kinky Jewess hair. Red, thick lips. She was in 8th grade when I was in 10th grade. I had glasses, braces, acne, and weird clothes. But I was doing an honest man’s work.

“Thanks,” she said. And then she would close the door right in my face.