The Steve Martin Technique For Choosing Himself 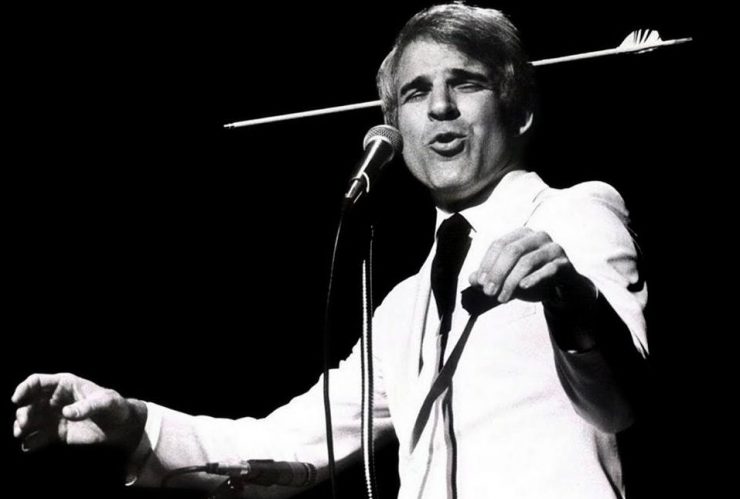 Steve Martin was sick of it.

He was performing in front of sold-out stadiums. But nobody wanted him and everyone forgot him.

The reason: he was opening up for others. For The Carpenters, Toto, and others. He had to be CHOSEN BY them.

Doesn’t matter. It’s good “practice”. But it didn’t do anything else for him. It didn’t build his audience (“platform” in today’s social media language).

So he “chose himself”.

He made HIMSELF the headliner instead of the opener that nobody knew.

He began renting smaller venues. And filing it up with his small but growing number of fans.

His skills improved even faster, with feedback from an audience that loved him. He started getting bigger and bigger venues.

Soon HE was renting out stadiums and filling them up. And the entire audience was there for just Steve Martin.

This wasn’t a new idea:

Shakespeare owned part of the theater production company that produced almost all of his plays.

Charlie Chaplin started the film company, United Artists, in 1919 to have complete control over his movies.

Lucille Ball refused CBS’s demand that she use a different actor than her husband Desi Arnaz to play her husband in “I Love Lucy”. They didn’t think Americans wanted a Cuban born main character.

So they took their show on the road, it was a huge hit across America, and CBS relented. “I Love Lucy” is the most influential sitcom in history.

They took it one step further: They started DesilLu Productions to produce their own ideas. One of those ideas: a little known show at the time called “Star Trek”.

I said Steve Martin quit. What I meant was: he quit doing standup-comedy. He wanted to write and act and keep learning. Like we all should.

But nobody would give him a starring role. Nobody!

So he wrote a movie, “The Jerk” , and would only let it be produced if HE played the starring role. He didn’t wait to audition for a role in someone else’s movie. HE WROTE the movie!

Paramount passed, in part, because of this. Universal picked it up, Carl Reiner directed and it’s now considered one of the funniest films ever made.

Steve Martin’s goal when writing the script: have at least one laugh on every page of the script.

He didn’t quit. He chose himself further.

I’m not Steve Martin, or Shakespeare, or anyone. Sometimes I think I’m mediocre at lots of things. But I get passionate about many ideas.

And whenever I sense there’s a gatekeeper getting in the way of something I want to do, all I obsess on is how I can get around the gatekeeper.

I wanted to publish a book I didn’t think anyone else would publish. So I did create a publishing company to do it.

I wanted to write newsletters to educate people and the Wall St Journal said “no” in 2009. So I created my own newsletter company in 2015.

I wanted to do standup comedy 3-6 nights a week. So I… (this I’ll save for another story).

Getting a “TV show” or “a million dollars” or whatever, is an outcome. But the process is now critical for the art and the success. Gatekeepers can’t create your success. Only you can.

This past year has been the most pleasurable year of my life. And I hope this next year will be good for you and me both. You and I are the same.

When you and I are stuck: let’s get un-stuck.

If you are reading this the day I’m writing it (Wednesday, Feb 21)

It’s going to be standing room only but I plan on doing “pop up comedy” at some venue every month.