Steve Wynn and the Lost Diamonds of Africa

You know the movie I’m talking about. It starts off in some African village. Always in Africa. Women are doing the laundry. Men are either sitting around or doing some hard work with a rusty wrench. Kids are playing around a hose that wiggles its way through the only dirt street like a snake. Maybe someone is picking something in a field. Then we hear a rumble. Everyone looks up. People start running but somehow they all end up in the middle of the street, exactly the point they were supposed to be running away from. Soldiers of some sort, ranging in age from 12 to 25, come up in jeeps, horses, maybe little tanks, they swarm through the village. It’s a big surprise. Nobody expected the soldiers there. The soldiers themselves seem surprised at their luck.

Then the gun firing begins. The soldiers are brutally and randomly kiling women, children, old men, while laughing. Depending on the rating of the movie, some women are chased. There is screaming in the background. Dust everywhere. Blood everywhere. A little girl crying “Mommy” but nobody holding her or comforting her. Blood in her hair. A boy, hidden behind tall grass, watching everything while the idyllic life he had known until that very moment crumbles all around him. 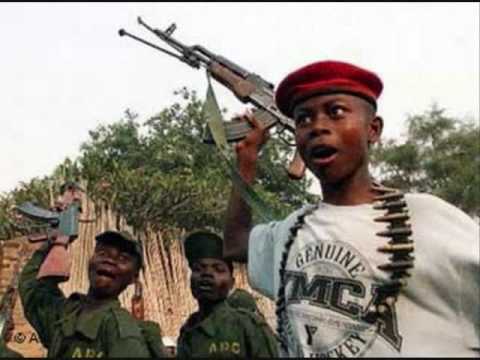 I’ve seen this scene in at least five movies. Blood Diamond, for instance. And Lost (ok, tv show). Others. I’ve spent at least $200 on movies so I can see this scene. I’ve hired babysitters so I can go to movies, buy popcorn, and watch this scene.

It’s the scariest thing we can imagine. That’s why they keep making it over and over. It’s foreign, it can’t possibly happen to us. And yet. And yet, if not but for the grace of god…we think. We could have been born there. Or maybe it can happen to us. Or it did happen to us. We’re all human. We can relate to the suffering.

And then we think: it did happen to us. At some point we looked around and what was once our life has now crumbled. It’s fallen apart. The soldiers, so irrational, so young, so brutal, so uncaring, have destroyed everything in our lives. We fall for the scene because it has the double-truth: it will never happen to us. It’s always happening to us. “But not that bad!” we think. We hold onto that truth but it also crumbles, along with the women and children. Our brain speaks in relativity. It translates the blood on the screen to the constant shattering of our dreams.

We eat the popcorn. We have to watch the next scene. Someone is brave. Someone comes through the other side. There’s revenge. There’s redemption. There’s a search for identity:

Who are we when our the clothing of our hope is ripped from us and we stand naked facing death? We need to find out. It’s worth the $200 across five movies (ten?). When all hope is lost we need to learn who we are, how to begin anew, how to stitch together the fabric of dreams that have been torn apart.

Which reminds me of another scene in another part of the world. Nora Ephron wrote about it. She was touring Steve Wynn’s art collection in Las Vegas. Wynn is notorious for not only being perhaps the best art collector in the world, but blind. Or on the verge of going blind due to a degenerative disease that can’t be cured. He shows the group a painting that he was going to sell to hedge fund art collector Steve Cohen for $125 million. Perhaps it’s his blindness, perhaps clumsiness, perhaps it’s a secret desire to sabotage himself, perhaps he’s just wondering where his wife is – he backs up and sticks a pencil through the painting, creating a $125 million hole in the middle of one of Picasso’s masterpieces.

He calls his wife to tell her the news. He calls Steve Cohen, who says the deal is off. He calls the insurance company. They will pay him $30 million for the tiny hole made by his pencil.

Years later, a friend of mine visited Wynn in his apartment in Las Vegas last week and saw the painting. “It’s completely repaired,” Wynn told my friend. A company went in and took every thread and one by one stitched it together. “It’s as good as new,” Wynn said. My friend looked at the painting and couldn’t tell. “It did seem as good as new!,” he told me.

But it isn’t. We remember the hole. We know for a fact it’s not the same as the last time Picasso blew his breath across the drying paint . There’s a psychic hole in it that will never be repaired, no matter how many nano threads are cosmetically sutured so as to show no scars. “Ahh, who cares,” Wynn told my friend, “I love this painting too much anyway to sell it.” And he did, after all, get $30 million and still got to keep the painting.

At the end of the movie, the one with the African women and children, we get to keep the painting also. The boy that was hiding. He survived. He grew up. And through the arc of identity we assume so casually in movies but is so impenetrably difficult to accomplish in our own lives, he’s now a man of accomplishment. He’s found his redemption. He can live with his psychic holes because after all, “he loves this painting too much”.

The one that every day we can toss colors at. We can slice and dice with cubist thoughts, looking at a problem from every perspective until some hidden meaning is unlocked. Or not. We eat our popcorn, feel bloated, leave the movie theater, go home. At the end of every day it’s time to go to sleep. I kiss the forehead of my feverish daughter in the middle of the night. Please wake up okay, I whisper, and I promise I will always take care of you.