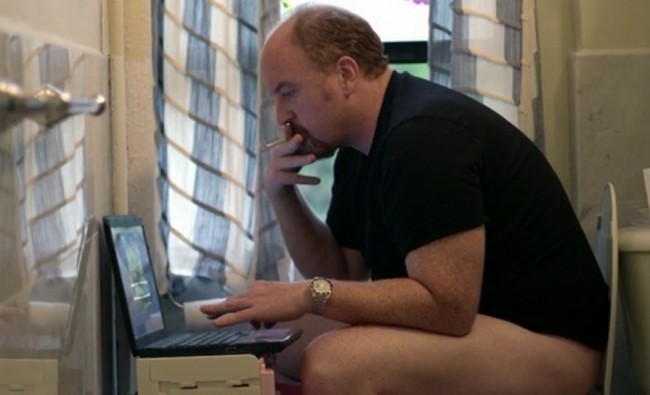 Last week, someone recorded a set Louis C.K. did, leaked it, and now everyone is upset.

I listened to the bootleg tape. I’ve also seen him perform recently.

Some of the tape was refined material from an older set I’ve seen him do in October.

Some points about this particular set, the outrage, and comedy in general:

If you were a painter and someone saw an unfinished painting they wouldn’t say, “Hey, it would be better if you finished off this corner!”.

People are bringing out the “old white man” thing.

The media keeps bringing up the “recently surfaced tape” where he uses the “n-word”.

IT’S NOT a “recently surfaced tape”!

EVERYBODY: it was a documentary on HBO called “Talking Funny” that featured Jerry Seinfeld, Chris Rock, Louis C.K., and Ricky Gervais talking about comedy.

There are over 1,000 reviews, articles, and commentary about this documentary. Most saying how great it is.

Also, Louis C.K. has a specific joke about this.

He says, he hates the phrase “the n word”, because when the media says it (exactly as written) they PUT the word in your head.

Louis C.K.’s point is that it’s hypocritical for these beautiful white anchors to sidestep racism by using a phrase that means the exact same thing.

And this video is a well-known documentary about comedy on HBO. Again, it’s not a hidden secret that just recently surfaced.

People say Louis C.K. was insensitive to transgender people in this tape because he doesn’t want to use “they/them”.

First, this is the Jordan Peterson issue. The more you screw with language, the closer you get to authoritarianism.

Watch 1,000 Jordan Peterson videos about the history of fascist regimes to learn why this is the case.

So Louis C.K., who has been doing this style of joke for THIRTY YEARS, suggests that he wants to be called “there”.

Because he doesn’t identify with a gender. He identifies with a location (i.e. specifically, he says, “your mother’s…”).

It’s an absurdist way to make a point about the dangers of manipulating language.

He did a similar joke (in substance, not in topic) in his very famous joke (YouTube it) called “Maybe”, where he suggests kids “maybe” should die from peanut allergies (“but not really”), and that was just the beginning of a joke that could be the best joke told in a special ever. But potentially his most offensive joke.

The way he pulls “Maybe” off is amazing (watch it).

But I am sure he WORKED that joke over, in private, at clubs just like last week’s, a million times.

Or his joke on abortion in “Louis 2017” where he says “it’s totally killing a whole baby AND women should be allowed to kill babies”.

This is much edgier than saying he wants to be referred to as “there” but I was in the audience for “Louis 2017” and I can guarantee everyone was laughing.

Or it’s like Dave Chappelle saying, “Why didn’t anyone make a fuss over Caitlyn Jenner changing her name but everyone hated Mohammed Ali for it?”

That’s not even a joke. But the crowd laughed. It’s simply a point that is interesting.

And there’s Jerrod Carmichael’s joke from “8” about global warming and why should we care about our grandkids? (“F them,” he says).

This is what comedians do.

“Why are we listening to a kid” testifying in the Senate who “threw a fat kid in the way to avoid getting shot at.”

Why not the guy who “electrocuted his parents”? (The absurdity of both images gets people laughing.)

First off, it’s a joke-in-progress.

I have watched Louis C.K. several times since he has started coming back.

He is WORKING on material.

He brings a notebook on stage and writes down when people laugh and when they don’t. I have seen some jokes bomb and some kill (it might take him a year to finish a joke).

That’s why they don’t record every set for public viewing.

The outrage stems in part on a) whether or not it’s funny (which doesn’t matter) and b) whether it’s insensitive to the parents of the kids who were shot at or the kids whose voices have been listened to.

It is insensitive. If I were one of the parents, I might be upset.

(Just to point out: when I saw him in Madison Square Garden with 20,000 people he started off asking all Jews to leave. Everyone laughed.)

But he’s also making the point that maybe we are ignoring less media-approved voices who might be facing deeper societal troubles.

For example, the tens of thousands of Americans dealing every year with the death of their Alzheimer relatives they spent years caring for. While drugs linger in FDA hell waiting to be approved.

He is saying we can be insensitive to everyone or maybe we should try to figure out who else we should be sensitive toward instead of simply having a media show.

Is he right? Is he mean? It doesn’t matter. It’s UNFINISHED material.

But it’s an interesting point. Why aren’t we addressing in the media the 22 veterans who kill themselves every day?

F) A ONE-TWEET LESSON IN COMEDY

Judd Apatow tweeted that the joke was lazy.

Judd Apatow is my all-time favorite comedy producer, director, writer and he is also a stand-up comedian.

Check out: Freaks & Geeks (TV), Knocked Up, Funny People, The 40 Year Old Virign, Superbad (he was producer), Crashing (TV), Love (TV), The Larry Sanders Show (he was a writer. I’d recommend this first but he had a more minor role), Anchorman, Forgetting Sarah Marshall, Trainwreck, The Cable Guy, and I’m still just scratching the surface…

He also wrote my favorite book on comedy, “Sick in the Head” (a reference to the fact that comedians are often ‘sick in the head’ in order to do what they do at the highest levels).

Judd Apatow tweeted a fascinating tweet that Louis C.K.’s Parkland joke was lazy and that it showed a deep anger on C.K.’s part and that he should explore that anger in the humor.

When he tweets I have to pay attention.

Forget for a second that the joke is unfinished material. (Although worth noting that, on the tape, it seems like the entire club is laughing.)

Apatow’s tweet should be separately viewed as a lesson on comedy.

Maybe there is a way that Louis C.K. could explore his anger a bit deeper.

He does this very well in his famous “WiFi on a plane” joke from 10 years ago. He also does this in his joke about hatred for neighbors when he moves into a nice building (coincidence: the building I live in).

But I don’t know. I’m not Louis C.K. He will know if he can make it funnier.

He is known to be an extremely deep comedian so perhaps, if he thinks it’s funny, he will explore that angle when making a finished product.

Apatow’s tweet is a great lesson in that it is always important to see how deep you can go with humor. This is the key to great success for comedians.

But it’s important to keep noting this was a bootleg tape and the material was not meant to be heard by everyone.

Maybe Louis C.K. sometimes tries this joke out in different ways and is assessing the best way to go.

Or maybe he thinks this is the best way to tell the joke. We just don’t know. Maybe he’s right. Maybe he couldn’t find a deeper angle.

Or maybe Louis C.K. is working through other issues now. We have no clue. We have no clue how his material will evolve into finished material. I can’t wait to see the journey.

100% of his jokes are offensive. People, in general, are stupid and offensive and absurd and he makes fun of that, often by taking on that role himself.

It’s an interesting point about who the media picks to be its “stars” and what groups it ignores (and hence disempowers). Why is Chris Brown still making records? Why aren’t veterans heard from more?

And, we’re all talking about it. I’ve seen about 20 articles on this joke.

I own a comedy club (Seinfeld performed there on Sunday).

Not from bad comedians. From professional comedians with TV shows and Netflix specials, etc. And the audiences love these jokes.

The typical set is a comedian doing premise/punchline for 15 minutes.

Most of the jokes are not about anything topical. They are designed to just get laughs and then move on.

These comedians talk about current relationships whether or not they are in one. They talk about experiences they never had. They twist words and make it funny.

Example: “The girl next to me on the plane was really, really into me… shutting up.”

They are getting the laughs but maybe they would even admit they are playing it safe. Sticking to what works every time. It works!

Perhaps they can be called “lazy”. Their jokes are very funny but maybe not as memorable or thought-provoking.

I have great admiration for that skill of non-stop premise/punchline. It’s very difficult to write those jokes.

But it’s not what Louis C.K. does. Or Dave Chappelle (also recently criticized for insensitive material) or Chris Rock or Ellen Degeneres (her amazing special “Relatable” about how to be relatable from your mega-mansion (and also getting some criticism)).

It’s not what Jerrod Carmichael does (e.g. let your grandchildren die from global warming, he points out in the Bo Burnham-directed, HBO special, “8”, which I HIGHLY recommend).

They talk about things that will maybe get people very, very angry (Louis 2017 makes fun of pro-life, pro-choice, Muslims, Jews, and on and on). And the joke works if it’s also funny and makes people think.

But it takes a lot of work. As Seinfeld points out in “Talking Funny”, maybe it takes five years to craft a single joke.

The booker at my club said she would not book Louis C.K. and she gave her reasons.

This is what makes a great society. People can agree and disagree and discuss and hopefully we all learn from each other’s perspectives.

I like to learn. The most impactful thing for me in this argument is Judd Apatow’s tweets on the topic. It got me thinking.

I went to a Louis C.K. set a few weeks ago. Everyone was laughing. Chris Rock was cheering him on. I was laughing. I think he offended everyone.

The next day, the NY Post said people were booing and walking out.

I’m not sure why they lied. I was there! Nobody was booing or walking out.

All I know is: unlike 99.9999% of comedians, he has everyone talking about his material.

The joke’s on all of us.