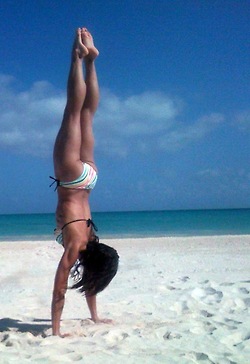 Claudia put down her book, “this guy wrote that once he started practicing his headstand he never gained any weight. He could eat a pound of butter every day. He said his friends were amazed”.

I wonder what that even looked like. What would my friends do if they were “amazed” at something I did?

Would they stand around and look at my stomach and point at it? “That’s amazing!” they would say as I would eat a bucket of butter and my stomach wouldn’t grow.

I asked, “How long would he be in a headstand?”

“It must be because maybe everything gets loosened up in the intestines and colon when he’s upside down and then it’s easier to flow out, you know? As opposed to getting stuck in there.”

“C.O.L.O.N.” appeared on the movie screen of my head. Flashing.

“Or,” Claudia said, thinking about it. “Blood has to go against gravity when it pumps through the body. Maybe the blood gets cleansed differently when you are upside down.”

We’re sitting there thinking about it. Drinking coffee. The sun coming up. A bug got in my nose and I had to snort so it would get out.

What the hell! We had no idea what we were talking about!

Gravity on the blood? The intestines cleaning themselves while upside down? Hahaha! Colon? What the hell is that all about? “How long would he be in a headstand”? Hahaha. Look at me! I NEEDED to know “how many hours”.

I don’t know. We talk talk talk. Really smart stuff all day long. I had Claudia record me the other day whenever I talked BS.

“Hey Claudia,” I said just two seconds ago while I was writing this, “what were some of the things you wrote down that time you were writing my nonsense down?”

“Ahh, yes,yes,” she’s picking up her phone. Click, click, swoosh. Click. “Here’s one,” she says. “You said: I think those little clouds near the ground is mildew coming up and not clouds coming down.”

What? It’s so great to have opinions. To talk talk talk.

Opinions then become the grandparents of hate or fear. When our nonsense disagrees with each other.

I want to catch myself today every time I waste air by talking baloney. When I actually look at the subset of things I know, it’s very little.

I’m going to be thrifty with my thoughts and words. Here’s how:

It reminds me of a story told about Calvin Coolidge, dead President.

Coolidge was known as “Silent Cal” because he didn’t like to talk.

A friend of his son’s was over for dinner with the family at the White House. The friend said to Coolidge, “I made a bet with your son that you would say more than two words during this dinner.”

Coolidge looked at him for a moment and said, “You lose”. They finished the rest of the meal in silence.