The Best Way to Make a Convincing Argument

Some guy, “agrover”, sent me a video this morning that trashed me. It looks like he put a lot of work into it. Maybe he figured I’d like Saturday morning cartoons so why not send me this cartoon he made about me.

In the second sentence of the video the female bear refers to me as a “total douchebag”.*** Here’s the video:

To make his point he calls me a “douchebag”, “a doofus”, “no sense of style”, “an idiot”, and badly in need of “dental work”. I got so bored I stopped watching about halfway through so maybe there’s more. The video’s too long. All of his economic stuff was wrong but I don’t feel like addressing it here. His argument becomes pointless once he starts using personal attacks.

But let me just give him some advice. I have two different areas of advice.

The first, how to make a better video:

A) keep it shorter. This video is so long I tuned out right away.

B) study the master. Omid Malekan worked for me from 2003-2007. More recently he made the famous video about “the Bernank” that now has over four million views and has appeared everywhere. Here’s the link to it. Its very funny. Omid told me he watched “Family Guy” a bunch of times before making it to get the right rhythm on a funny video like this.

Next, and more importantly, how to make a convincing argument:

A) I don’t insult anyone. Its meaningless to do so and doesn’t really support my argument and I don’t like to make other human beings unhappy.

B) I try to find actual historical examples to support my case. An argument about economics or politics is no good if its not backed up with history and statistics demonstrating my cause. Otherwise its just opinion. We all have equally valid opinions.

C) I try to be constructive. If I disagree with something I try to take it one more step and figure out how my opinion (and facts) can be used to help people.

D) I diversify my responses. Meaning, I find enough examples that are so exclusive of each other that it becomes hard to argue with because you have to refute each example.

E) In general, I try to find positive things in the world. Just look at literacy rates, mortality rates, food that can be bought per hour of work, and a billion other things to show how life has improved for people in the developed world over the past 100 years. I like to be positive because it gives me hope for my own future and for the future of my children. And its easy because there are many things to be positive about.

F) Keep it short and sweet. Language was made for entertaining. Really, no other reason. So even when arguing, make sure you entertain. If people fall asleep, then you failed to make your point.

Most important is rule #A. Claudia tells me I shouldn’t post something like this guy’s video because it gives too much negative energy here. However, I think its funny that the guy did that video and I think it lets me underline rule #A. I’ve been writing for the past ten years in public forums. I’ve had a lot of negative energy thrown my way. Just yesterday, I got this email for instance:

You are an imbicle, idiot, ignorant. You should be shot like a downed race

horse. Taken out of your misery. Misleading people. You have no values. Life

is about values, where there is none you deserve to die. Do not remove values

from people. No scruples. Stupid financially & otherwise. You have no

understanding of anything human. You are not a writer, do not try. When you go

to the grave, hopefully, soon the intelligence level noth here & there will

His IP address is: 68.178.42.220 which is in Savage, Minnesota and his cable provider is Integra. But when i responded to his email it bounced since he used a fake email address.

Here’s the thing: people are really angry. I get it. The world has changed and we’re all in post-traumatic stress syndrome from not only the 2008 crisis, but 9/11, the dot-com bust and everything that happened in between. Everything we thought was safe: having a job, going to college, owning a home, even our relationships, has become more unstable than ever. Every one who reads this blog knows I’ve had my share of ups and downs. I wouldn’t wish my particularly painful roller coaster on anyone. Here are some of them:

How I Developed Psychic Powers

The woman who peed on her husband, and other stories of stress.

And I have a primary technique for getting rid of the anxiety and moving forward. I’ve only been able to pull myself out of the death spiral when doing the technique outlined in the above post.

So, is it bad that I give the two guys above a forum for their hate? Maybe. But there’s a lot of anger out there. And the anger needs an anonymous forum to shed its hate. The World Wide Web (“triple-dub” for those in the biz) has provided a convenient wall to throw your shit against. But let me ask your advice? How do you deal with mindless anger when its thrown your way?

*** I have to admit: I didn’t really know what a “douchebag” was despite being called it many times, even since I was a kid. So finally, I looked it up: “a piece of equipment for rinsing (douching) the vagina.” Ok, I can handle that. That doesn’t seem like such a bad thing to me. Feel free to call me that. However, the Urban Dictionary had a different definition: “Someone who has surpassed the levels of jerk and asshole, however not yet reached fucker or motherfucker.” In which case I’m insulted. What? Its like I’m in some mediocre twilight zone of insults. How come I’m not a full-fledged “motherfucker”. Wow, this really hurts now.

(my two daughters watching the above guy’s video about me) 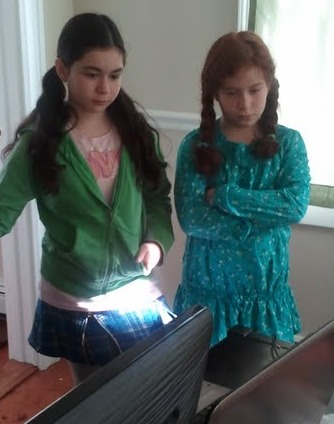