The Chelsea Hotel, Chubb Rock, and you can never go home again.

It was three in the morning and the girl was crying on the staircase between the 7th and 6th floor of the Chelsea Hotel on 23rd Street. I lived on the 9th floor. I walked past the girl and I desperately wanted to talk to her. I was going to be her hero. And whatever got her crying I would be able to wash it away. They say when you even brush against someone in the street its evidence that you were husband and wife in at least a million past lives. How many past lives had I been intertwined with this weeping angel on the staircase?

On another occasion I took the elevator down. I heard a guy asking me to hold the door. Chubb Rock, the rapper, stepped in. He was huge and he mutilated the space until I had to squeeze into a corner. I asked him what the freakiest thing he had ever seen on our floor was. He told me about a girl who was a few months late on her rent. Stanley Bard, the owner of the hotel, called her and asked her where the rent was. She said, “Its ok. I’m coming right down.” And then she took a running leap out the window and ended up all over 23rd St.

“Come to think of it,” Chubb told me, “that was in your room right before you moved in.” 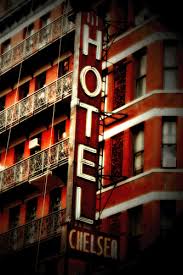 12 years later I was living in the Chelsea Hotel again, after separating from my wife. I thought for a second that everything would be ok if I just moved back to where I lived before I had been married. Mollie, my youngest daughter, six years old at the time, was visiting me. Things weren’t the same. We were walking down the stairs and I had to make sure she didn’t step on a used condom. There wasn’t a door on our bathroom. The heater made a clanking sound in the middle of the night. I woke up and I thought workers were banging on the pipes until my head hurt. The art on the walls, which once looked exotic and real to me, now looked like collages made by kindergarteners. Mollie’s shock of red hair lit up the whole building in a way I never saw before.

But first, the girl who was crying from 12 years earlier. I walked around her without saying a word. I really wanted to talk to her. Anything could happen. She kept on crying. How could beautiful people be so sad? When I was two floors lower I thought I should go back up and maybe talk to her. Agony! Why couldn’t I talk to a crying girl at three in the morning? Agony like this is only reserved for the things we’re too afraid to do.

Timor, who worked at the front door, told me a few weeks later that the crying girl had once made a movie where she was tied up and wearing a mask that barely let her breathe while another girl dripped hot wax onto her vagina for two straight hours. “You missed the party,” he told me. “It was at that club, you know the one.” He waved his hand in the air, conjuring up a memory we never shared. “They showed the movie on the wall for two hours and we all had to buy two drinks before we left. “

Back in 1995 I had just finished my first website. I built a website for a Russian diamond dealer. Diamondcutters.com. The Russian gave me a bag of $17,500 in cash. It’s the first time I ever had more than $500 to my name. I went straight over to the Chelsea Hotel and got myself a room for a year, paying completely in advance. “What kind of work do you do?” Stanley Bard asked me when I handed him the bag of cash. Back in the 90s people didn’t know what to do with their money. They were giving it away.

Everything’s different now. I can’t tell if its because I’m older or if more shades of gray have entered into the universal color palette. A few years ago management changed at the Chelsea Hotel. It was going to become more upscale. Now, the latest I’ve heard is that someone is going to do some sort of buyout of the place. When I last moved into the Chelsea Hotel (in 2008) I was going through a major life change and needed some place I recognized as “home”. When I finally left the hotel a few months later I had been completely refreshed. I had spent weeks at a time talking to nobody. I scribbled down ideas and then crossed them out and quickly forgot about them. I had a fever once for a few days where I thought my brain had been turned inside out and left to dry on the radiator. Sometimes it’s good to go home to get a completely fresh start. In those few months the slate wiped completely clean for me. I hope I never have to go home again.