The One Thing I Remind Myself of All Day 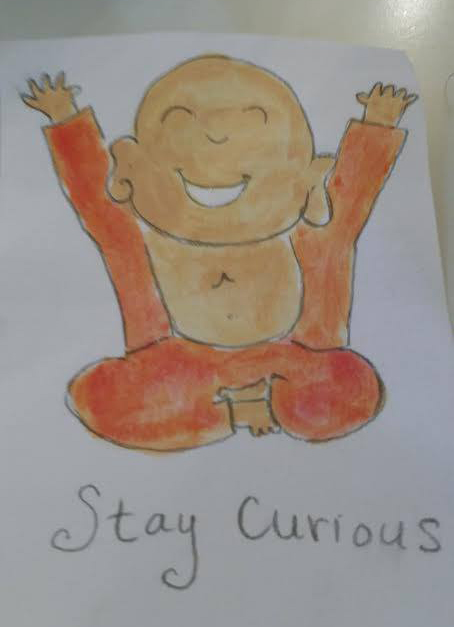 The fantastic artist and doodler, Molly Hahn, sent me a picture as a gift. A picture that has not left my pocket since she sent it.

It’s amazing the effect a physical drawing has instead of the onslaught of images we get every day on our computer.

The computer screen is a prison wall separating me from the art.

Molly’s gift was a doodle of a buddha-like child with his hands in the air saying, “STAY CURIOUS.”

Why is this so important that I keep it in my pocket all day long? Why is it a reminder I constantly refer to?

Because KNOWING is the first step in the long road of misery and failure.

Every failure in business starts with the sentence, “I KNOW this will work.”

Every failure in the stock market says, “I KNOW this stock will go up.”

Every failure in science starts, “I KNOW this will cure cancer.”

Many jobs end with, “I thought THIS was the job I would thrive at.”

Every relationship failure comes from, “I KNOW she is the ONE” or “Anyone with me HAS TO DO X, Y, and Z.”

How many people have died of chemotherapy drugs and now reports are coming out saying chemotherapy is over-prescribed and doesn’t help most cancers?

How many people judge others (“fix” their position) and then lose the opportunity to learn from them or make a friend, or fall in love?

How often do we give up when we KNOW rather than staying curious so we can continue to simply do our best.

But there’s a fundamental belief in quantum mechanics that is related to the “Stay Curious” message: When you observe something, it changes.

If you observe and measure a subatomic particle, the simple act of you observing it, changes the particle.

Before you observe the particle, many possible outcomes still exist. In quantum mechanics, the universe is made up of probabilities rather than fixed objects.

Only observation narrows down the probabilities into something fixed. This has been tested over and over.

In other words, once curiosity changes from “I wonder” to “I know!” then a small piece of the universe changes, becomes more fixed instead of more “What if?”

Is this good or bad? I don’t know.

Every day I wake up and write down ten ideas. I’m a firm believe the only way to have good ideas is to every day exercise the idea muscle.

I usually read a little and then I take out my waiter’s pad and start writing down ideas. Good ideas and bad ideas. Mostly very bad ideas.

“What if the pee in my toilet can be analyzed every day and tell me if I have any diseases or not?”

“What if I pay my daughter $300 to write a piece of fan fiction that we can then upload to Kindle Worlds on Amazon?”

“What if I switch careers completely? What would I do next?”

Steve Jobs didn’t say, “I’m going to make another computer.” He said, “What if I made a cheap computer that took some ideas from Xerox and had multiple windows on the screen instead of just one window?”

Larry Page didn’t say, “I’m going to make another search engine.” He said, “What if I made a search engine that ranked pages by looking at all the high-ranking pages that refer back to a page as opposed to just counting word appearances?”

Neil Gaiman didn’t create yet another superhero comic. He asked, “What if Dream was a real person, who ruled over all the dreams we have?” and then made the bestselling Sandman comic.

“But,” the smart person might say, “if I’m ALWAYS curious I will get nothing done. If I keep saying ‘what if I eat bacon as opposed to pancakes?’ I’ll never actually eat breakfast!”

I don’t know the answer to that. Maybe you don’t need to eat such a big breakfast. Maybe you can have a fruit? Maybe you can take an early morning walk. Or maybe you can outsource the decision: go on twitter and say “Bacon” or “pancakes” and see how people respond.

Or maybe…you can just eat Bacon. Who cares? Eat your breakfast and then be curious about the next thing. There’s no rules to this!

I was talking to Dan Harris the other day, author of “10% Happier” and anchor at ABC’s show “Nightline”. He said his father used to tell him, “The price of security is insecurity”.

What an insightful line!

When you have something you think is yours, you actually have two things: the object that is yours, and now the fear or insecurity that it will some day no longer be yours.

This is true for opinions we hold close and cherish. The opinions we use to define the universe and the life around us.

For me, it’s important to know some things: that tomorrow I will wake up on a bed and not in the middle of the gutter with a heroin needle sticking out of my shoulder (although I’m open to the possibility).

But I want the universe as much as possible to be a giant mystery. I love to be a little kid and explore. I love to find secrets and magic and coincidences and surprises.

How many times today can you say, “What if?”

As much as possible, I practice the simple phrase Molly drew for me and I try to live my life by it. Things are more fun as a result.