The One Week Heroin Addict

“Listen,” I said to the nurse and now I feel bad about it, “I called in for a PERCOCET prescription. You told me, ‘Done!’ and then I went to the pharmacy, waited around for 30 minutes , came back home all excited with my new toys, opened up and saw it was Vicodin. You guys LIED to me. Vicodin does NOTHING for me. I need Percocet.”

“One second while I get the doctor.”

A nurse’s life is very easy. She doesn’t have to take it from anyone. She can always” get the doctor”. And  the doctor is not going to get upset at her either because she runs the entire office. So the nurse is sort of like God. The doctors are angels, and the patients are little squirmy demons that live off the meat cast off from Satan’s throne after he finishes eating humans.

“Listen,” I said to the doctor and repeated the whole thing.  If everyone just LISTENED I’m sure we’d get to a rational conclusion. [Btw, this is all an update to Me and Jay Leno, my first story on my dental pain]

Its only been one week and I feel worse than Rush Limbaugh about this. They told me Percocet would solve my pain and it did. Day two I got a chronic case of hiccups. I got hiccups every three seconds for about eight hours but then it went away. It was annoying. Particularly when my two daughters were laughing at me. “Try this,” daughter number one said. And she showed me how I can drink while my head is upside down. It was weird and it hurt and it didn’t help and water went all over the place. Particularly when I spit the remainder of the water in my mouth on her.  [Oh, I just realized. My actually first story on this dental visit:“I’m a bit afraid today“. ]

“Look, “ I said, “it’s been six days. It’s not like I’m a drug addict. As you’ve already guessed, I’ve never even been to the dentist before. I just don’t like the pain and it gets it away.”

“Here’s the problem,” he said, “its quickly addictive” (I learned this fast. I started with half a pill and now needed 2 pills whenever the pain came up) “and it messes up your stomach. You’re never going to go to the bathroom gain.”

What? Wait a second.

It occurs to me I havent’ gotten to the bathroom in six days. Since my dental surgery. No wonder I was feeling sick in the stomach all the time. And I was breaking the CARDINAL RULE number two, perhaps the most important rule on 33 Unusual Tips to Being a Better Writer. And I was cranky all the time.  No wonder Claudia was leaving the room everytime I entered. And then I’d follow and she’d go in the other room. And then finally she’d go outside, where I couldn’t follow because, well, its outside and I like being inside.

“Ok,” I said. I was the most agreeable one week heroin addict on the planet. “I’ll try the Vicodin.” I guess I wouldn’t have to pimp Claudia out.

“Better yet,” he said, “why don’t you just stick to Advil and then we’ll see how it works.”

So here I am, still breaking rule #2. Still a little cranky.

Yesterday I gave some advice. I told one friend how she could make a talk a bit more spicy. I helped another friend with a presentation he was giving to raise money for his hedge fund. And with another friend I gave line-by-line advice on a blog post he made. It was a good post but I felt it could be better so I broke it down, almost every word, and described how I would do things differently . (I hope he was being truthful when I asked if I went over the line with my criticism, which was rather intense, and he said “absolutely not!”).

I was going to make this post “33 Tips to Being a Better Communcator” sort of as a follow up to my post, 33 Unusual Tips to Being a Better Writer, which is one of my favorite posts. Since communicating yourself is like a three dimensional version of writing. But I have another idea. I’ll do that post another time. Send me a blog post, powerpoint, presentation, speech points, whatever it is you’ve done or are thinking of doing. Let me coach you through it. If you don’t mind me linking to you or quoting directly from the post and my thoughts on it then I’ll be happy to give you my advice. I’ll pick out three or four items I’m going to do today (It might be hard to respond to too many posts but I’ll try) send back feedback on the posts or powerpoints and then sometime in the next week do a post about it.

Meanwhile, I think Claudia is finishing up her yoga.  She’s been doing yoga for about 90 minutes upstairs. Which means she’s going to be hungry. And I know yesterday she bought the ingredients for Waffles. And I can’t turn down homemade waffles. 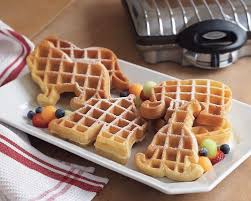 No human being can. And I can’t turn down second and third helpings of these waffles. But, rule number two… Ugh. I’m going to have to eat these waffles.  Sometimes being in a bad mood for just one more day isn’t so bad.