The Only Good Idea is an Unoriginal Idea

Jews are so dramatic!

We don’t know the historical accuracy. Those accounts could be true. They could also be a novel. There’s also discrepancies in each of the accounts. Authors can’t help themselves. They add their own flourishes to such emotionally intense encounters. Someone is going to die. Blah blah blah. Someone else is going to be the betrayer.

If I were at the dinner I’d probably be thinking, “is he talking about me?” I always have this insecurity that I’m the bad guy. If it’s a business dinner and someone said, “one of you here is a liar and a thief,” I’d also think, “jesus, I’ve been found out” even if there’s no way he could’ve been talking about me.

Because people love to look at an accident that is happening in realtime, many artists have painted this scene.

Here’s a painting from the 13th century:

Because The Last Supper was often a fresco on a church wall they tended to be somewhat peaceful drawings despite the subject matter. Everyone has halos. The faces and bodies aren’t very accurate. They are a bit more contemplative and almost silent (nobody seems to be speaking in the drawing) so that monks in the church would find solace in their own contemplation of the events.

If someone told me at dinner, I’m about to die, I don’t think there would be that many peaceful halos.

Da Vinci added several twists. People are talking. Anguished even! Because the news was so horrible. Who could the betrayer be? I don’t know, says the guy on the right! The details of the faces and bodies are more accurate. Da Vinci had models for every person at the table and did autopsies repeatedly to get muscles, bones, faces, shadows just right. The three windows in the back – the holy trinity. The sexual ambiguity of John, left of center, led to The Da Vinci Code 5 centuries later. Judas grabbing the silver, about to reach for the same bread as Jesus.

Was any of this original? It was all described in detail 1400 years earlier. It was totally unoriginal. Leonardo was a plagiarist! 100s of artists and writers had painted and written about this scene before him.

One of Salvador Dali’s most famous works makes a further twist. It reminds me of the watching TV in the 70s. Everyone on “All In The Family” would always sit on one side of the table so the camera could show them all. Da Vinci  did the same thing. Dali does away with that. People you can’t see are sitting on the other side.  He then adds his own blend of surrealism with the ghostlike body and the blonde Jesus. 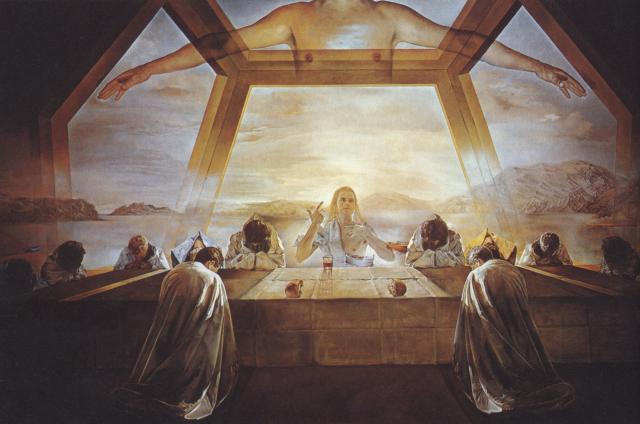 Fast forward to Andy Warhol. Known for taking common images, doing his pop schtick to them, almost tongue in cheek and then charging millions for the result. He simply took an image of Da Vinci’s Last Supper, silk screened it multiple times, and created what is now considered one of his most expensive masterpieces.

Is this original? I don’t know. Someone would probably pay $40 million to hang it on their wall even though they can just print it off this screen. It created success and wealth for many people as it rose in value and the various versions of Warhol’s Last Supper changed hands repeatedly.

And finally, my favorite play on the theme. From Battlestar Galactica:

The artist here (nameless) stole all of the themes of the original story: betrayal, divinity, anguish, “the last chapter” before an apocalyptic event occurs, and applies it to a sci-fi story that had many biblical themes. The picture divided, just like Da Vinci’s, into groups of three people. The character of John, played by Baltar, emotionally overwhelmed by Six in the center, just as John was emotionally overwhelmed by what Jesus told the group.

Every idea is like a wedding dress. Something old, something new. The old is thousands of years of thought, of story, of emotional conditioning, or horrible parenting, of wars, of sickness, of fear, of marketing, of education,  all added together to create the emotional baggage that is intensely programmed into your psyche.

The new, is you and everything you can do to re-assemble the old into something you like, something that makes you tingle, something that gives you pleasure. Your pleasure is your body and mind telling you that what is in front of you is uniquely yours and nobody else’s.

A GREAT idea has to be old and new.

It’s a party in your brain!