The Skills We All Need But College Doesn't Teach

He dropped out of high school. Started a company that didn’t work. Read a lot. Then started another company. He wanted me to advise his company.

I didn’t do it. But we spoke for awhile about his being a high school dropout.

He said, “Once I figured out how I can learn to learn then I didn’t need school anymore.”

I didn’t know whether to believe him. But I liked that phrase, “learn to learn”.

He made an app that didn’t work. Nobody wanted it. Not even his friends who said they wanted it. I was thinking a year or two later: thank god I didn’t advise that company.

So he backed off and asked himself why the app wasn’t as popular as he thought it would be. Nobody can predict the future. A Harvard PhD and a high school dropout have equal skills at prophecy.

He called up the top people at many companies and asked them if there was any part of his app that they would want.

He met with maybe 50 heads of technology at all sorts of different companies in different industries. He figured out what their problems were. He listened and studied.

I’m not saying the name of his company because I don’t know if news was announced yet. But he just raised $60 million at a $250 million valuation. He’s on track for great revenues this year.

My friend who was giving me this update said, “I’ve never seen anything like this. He has a 100% close rate on his sales calls. Everyone buys.”

Is he uneducated? Of course not. He reads constantly. Maybe more than anyone I know.

Did he not get networked enough? Of course not. He created his network by helping them solve their problems. If I’m not mistaken, Google is one of his top investors.

Do I regret not advising his company? No. I’m not a very good advisor I think. I like to sit in my room with the shades closed.

If you go for every opportunity you end up chasing everyone else’s dreams except your own.

Everything has turned upside down. FOR THE FIRST GENERATION IN HISTORY, since Julius Caesar, we are on track to make less money than the generation before us. And with $1.2 trillion in college debt to pay back on top of it.

This is not just in America. The entire world is having this problem. This generation will make less than the generation before. We were all told to go to school and get a job and incomes would rise.

We were all told a lie.

Admittedly, we have some good things going for us. I can take any course I want for almost free. I can read books on my kindle.

I can stay informed if I want (but I don’t) courtesy of an expelled college student (Ted Turner) and I can eat healthy (courtesy of college dropout Whole Foods founder John Mackay).

You can say, these are all anecdotes. That’s true!

I have no defense. And yet, I can read, write, connect, eat, stay healthy, etc so I have time and energy to learn.

I’m an anecdote also. I went to college and then graduate school. Was thrown out of graduate school (coincidentally by the friend I had dinner with last night who told me the update about the high school dropout).

I hope it doesn’t take so long for my own daughters. I hope they learn how to learn. I read one study that shows that 45 minutes after kids leave a lecture they can’t remember anything said in the lecture.

Here are the only ways you can learn something. College or no college:

I have no study to quote on this. This just an anecdote also. This is the only way I learn.

I want to home-college my kids. I know they have passions and interests. I want them to explore those instead of wasting time on useless things they will forget.

Then they need to put those passions to work. You change the world by changing yourself. That’s how you unwrap the unique gift you can give everyone else.

Here are the skills they need to learn that are specifically NOT taught in college: 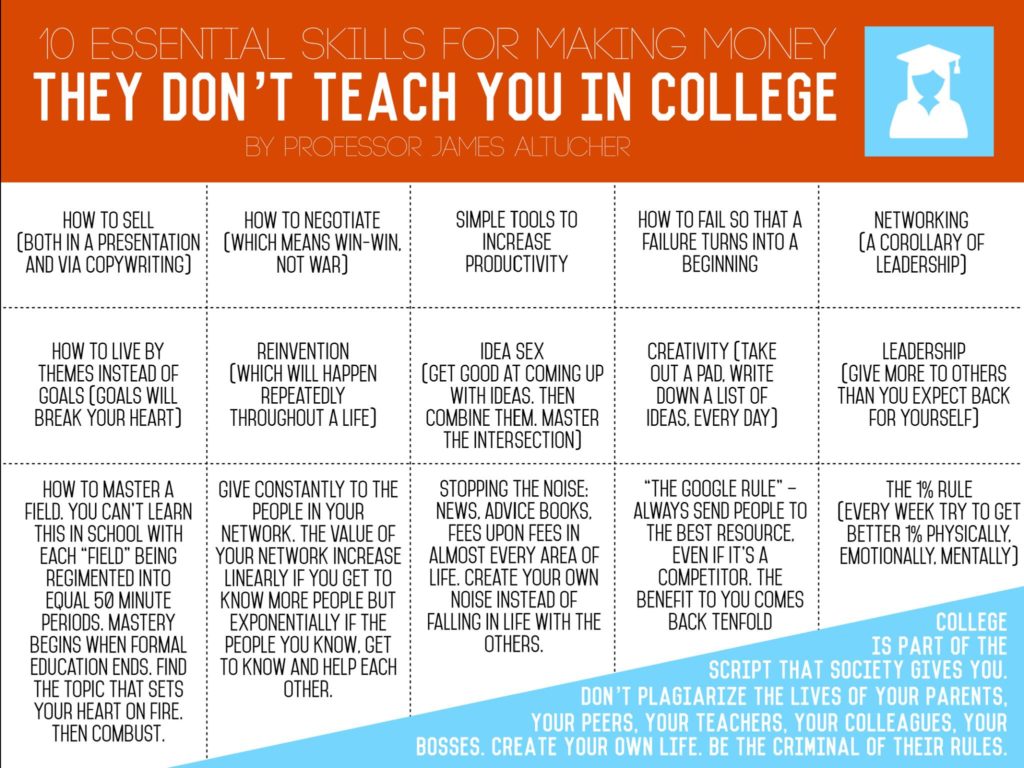