This Is What Happens When You Try To Do the Impossible 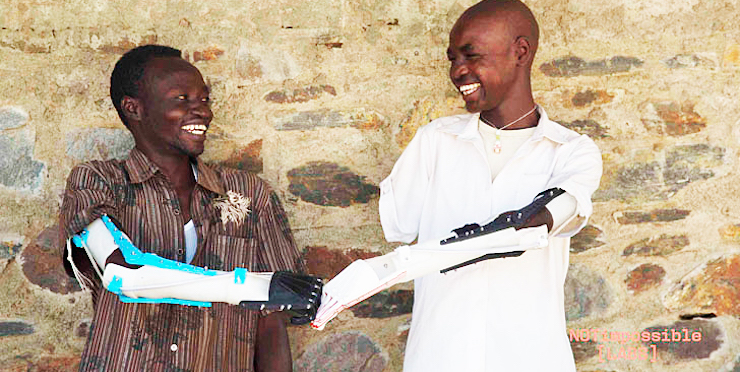 Daniel was tending sheep in Sudan when a bomb blew both his arms off.

When he heard the bombs in the distance he had hidden behind a tree but wrapped his arms around the tree. A bomb went off near the tree and his body was safe.

But the arms he had wrapped around the tree blew off. When he came to, he said he wished he were dead so he would not be a burden on his family. He was 12 years old.

I was ashamed to be talking to Mick Ebeling.

Here’s why: when I hear the story above about Daniel I think: that’s really sad. I think: I wish that hadn’t happened to him. I think: I’m glad it didn’t happen to me or anyone I know.

Mick thinks differently. Mick flew over to the Sudan without any knowledge of arms or war or prosthetics. He got together a bunch of experts on 3D printing, prosthetics, mechanics.

He 3D printed arms for Daniel in a way that had never been done before, cheaper than prosthetics had ever been made before.

Daniel now has two prosthetic arms. He can feed himself. He can help his family again.

I spoke with Mick yesterday. I told him I was ashamed to be talking to him because I would not have thought that way.

He laughed and told me his theories on helping people. His company, “Not Impossible” ignores high stakes situations where people say “It’s impossible” and figures out how to make the situations possible.

He used his experience with Daniel to come up with ideas on prosthetics that could help many people. He helped “Tempt”, a graffiti artist, use a machine Mick developed to create art again and communicate with people again.

Then he uses the experiences of helping one to create products that can help many.

B) BRING RIDICULOUS TO ACCESSIBLE

It was ridiculous to get cheap prosthetics to Daniel in the Sudan without any experience. And yet, just a little brainstorming with the right experts, gave Daniel arms. And now the same technology is accessible to anyone.

For 5000 years or longer, humanity has driven forward with story-telling. Too many people forget that but the only way to really communicate effectively is through story.

D) EVERYONE HAS PERMISSION

I hate to use my own cliche, but the benefits of choosing yourself is that other people’s lives are saved while you avoid waiting for someone else to choose you.

As soon as he committed to helping Daniel he immediately:

– found the experts he needed to talk to (free)

– got them all talking (mostly free)

Then he went to intel and others and said, “We’re already doing this. Are you in?”

Too many people say, “I have an idea. Now I need funding.”

Don’t do that anymore. Stop it!

Say instead, “I’m already doing this. Here’s the ten or twenty things I’ve done so far. Here’s the results. Are you in?”

F) CHANGE THE DEFINITION OF FAILURE

For everything Mick did, even though his company is for profit, he gave away for free all of the knowledge he learned.

Then other people companies could build better prosthetics, or tools for deaf people, or tools to help people with ALS communicate.

Then Mick would be able to incorporate those new technologies back into his products.

The end result: more people helped with better and better products that were being made cheaper and cheaper.

Too many people try to hold onto ideas saying, “it’s mine!”.

But ideas, and the world, get stronger when they are allowed to share and mate and grow children and the idea babies make the world better.

H) LOOK FOR THE ‘ADJACENT POSSIBLE’

When Mick started his research, he found someone who had made a mechanical hand. Not the perfect prosthetic hand. But a cheap hand that could grasp items and be functional.

He started with that and then began brainstorming with the inventor and with others about what else is possible – given that a simple mechanical hand was possible.

Never start with a blank page. Find all the things closest to what you want to be possible and use those ideas as starting points to find the next generation of possible.

Mick didn’t help a billion people have better prosthetics. He helped one person.

“If everyone would just help ONE person today then the world will be a better place tomorrow.”

In other words, if everyone reading this article would help one person today, the world will be a better place.

Always think at the end of each day, “who did I help today?”

J) STAND NEXT TO THE SMARTEST PEOPLE

Even if you aren’t an expert, give yourself permission to be a producer. Produce!

After the podcast, Mick and I took a walk and I told him stuff.

“How are you dealing with that?” he asked me.

I said, “Every day I follow my own advice.

“I try to be healthy. I spend time with friends. I’m creative every day. And I look at the most difficult part of my situation every day and find things to be grateful for.

“This has been amazing for me to see it work in action for myself. I bounce back stronger every day and I feel like life is amazing.”

“You should write about that,” he said.

He laughed at that. And we shook hands and then I went one direction and he went to save the world.

Update: Listen to my interview with Mick Ebeling here and check out his new book Not Impossible: The Art and Joy of Doing What Couldn’t Be Done.