About the Time I Lost All of My $2 Bills 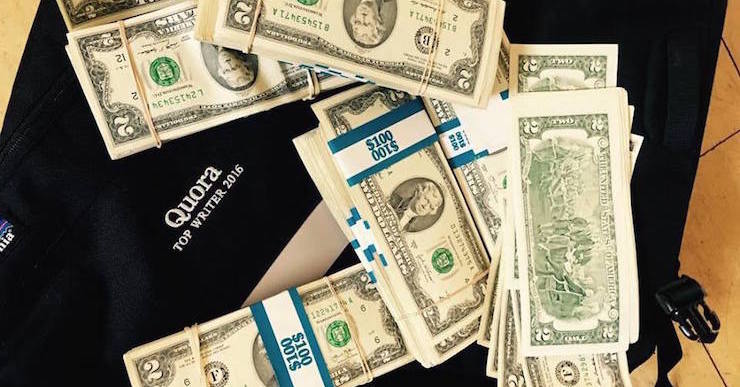 I had them in a backpack. Perhaps it’s ironic that the backpack was a gift from Q&A website Quora where I was a “top writer” for 2015. I can answer questions all day long but maybe nobody should listen to someone who loses 2000 $2 bills.

In any case, I began my search.

I went to the Apple store. I was there earlier in the day because I had accidentally dropped my iPad too many times and the screen was all cracked.

“What the hell happened to this?” The workers gathered around. I Jackson Pollacked that screen and was using it until the last minute.

I bought a new one. Declined the insurance – “you know you can replace this if it gets smashed again?” said the guy when I decline.

I left the store and promptly dropped the iPad on the ground.

Ok. Now I went back. A new cast of actors were wearing the Apple employee t-shirts.

They looked at where I had been. They looked through the lost and found.

I was checking out the iPad Pro in the meantime. The keyboard looked decent. I want to find some use for it but I don’t know. It’s too big so how would I carry it around?

Who can know? What if a worker had found it, opened it up, saw the money (it was in a transparent pouch in bundles of 50 $2 bills), and decided to take it home.

When I was younger maybe I would have taken that money if I were working at an Apple store and found it.

I hope I wouldn’t have. But I don’t know. There’s no way to know now, 20 years later. Would I have felt guilty if I had done it? I just don’t know.

I went to the cafe I go to every morning. It was nighttime already.

Every morning I go there and sit in the back and there’s nobody there and I read. I order two coffees and a water. I can sit there for hours.

The same two people work there every morning. But at night they were gone so I didn’t recognize the people in there.

I asked if they had found a bag. “Nothing is in the lost and found,” she said, “I’ll check the back office.”

What else can I say? I have to admit, I love the cheese danish, even though I don’t like cheese. I waited.

She came back with my bag. “Here it is.” Then she opened it. All the bundles of $2 bills fell out.

“We can’t give it to you,” she said, “you have to appreciate that you would want us to be as secure as possible with this stuff.”

“But who would come in here asking for a bag?” I said. “I’m the only one who could know I lost this bag.”

But she had an argument. Maybe I should have mentioned the money in advance.

I pointed to my jacket, which by coincidence was the jacket the same site, Quora, gave out to the top writers of 2013.

“I’m sorry,” she said, “But I’ll call the people who work here in the morning. You said you left it then, right?”

She called both people. She described me (“Hair”, “glasses”, “Yes – Caucasian”, “Says he’s the only one here every single morning”.)

They didn’t recognize me by her description. Nobody wanted to give me the bag. “Were you with an Asian person?” she asked me once when talking one of the people. “No,” I said. “It was empty here for two hours.”

She took my picture and sent it to one of them but I was standing there for a half hour and nobody called back.

Finally the owner came in to close down the place. She explained the situation to him. He looked at the Quora logo on the bag and my jacket. He said, “Just give him the damn bag.”

She gave me the bag.

When you “Ready. Aim. Fire” sometimes you aim for too long and you lose customers, respect, and opportunity. You lose your chance.

When you “Ready. Fire. Aim” you may miss sometimes, but you’ll hit the bullseye more than everyone else.

Repetition and persistence is the only way to get better at risk-taking. Success is about taking risks but knowing how to reduce damage. You only learn that through persistent practice.

I’m going to go to the Apple store now and use $2 bills to buy a new iPad. Maybe I’ll get the Pro this time.