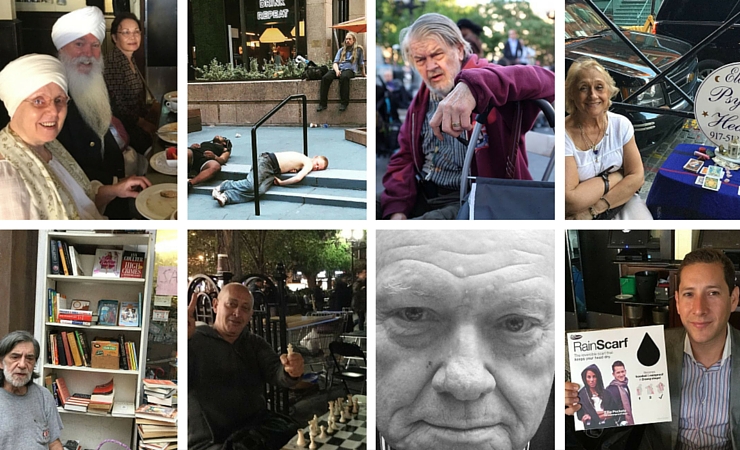 I felt trapped. So I shot her.

She looked aggressive. And I was curious about her.

So I got closer. And started asking questions.

I knew if i didn’t talk to her, I’d be itchy forever.

If I let fear stop me from saying “yes” to new experiences, I’d be dead. I’d be as dead as the people who say it’s dangerous to ask questions…

Just as trapped. Just as afraid… as them.

So I challenged myself. And now I’m challenging you.

If this idea… the idea of overcoming one fear a day scares you, then keep reading.

Because the payoff is this: the trap will be lifted.

I took a photo everyday for 30 days.

You don’t have to this challenge. Or any challenge at all.

Just do something small. Something uncomfortable. Wave to someone.

Floss one tooth. I don’t know.

Shoot your fear. Make up a challenge. And I hope you share it with me. Maybe we’ll do it together. 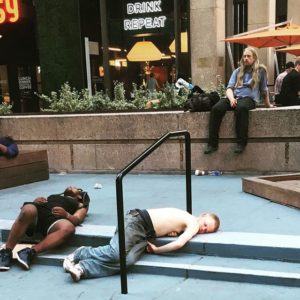 We passed an old man who fell on the sidewalk and was bleeding all over his face and legs.

His wife was helping him sit up. He was crying.

Police were there. An ambulance was on the way.

I wanted to take a picture. My friend said, “Too soon.”

Which is sort of funny because once it’s no longer too soon, there’s no more blood.

Blood is when people fall and need to come back. When a partner helps them. When they cry.

But anyway, homeless kids drugged out on a sidewalk. 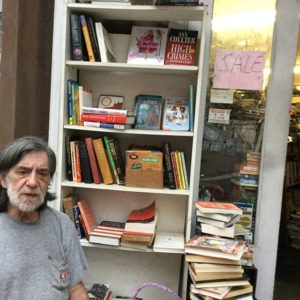 I got a woman pregnant, who then got an abortion (I wished she hadn’t) and then dumped me.

Afterwards, many many years ago, I went to this bookstore on court street in Brooklyn. Piles and piles of books in no order, on the floor, pages ripped out, grumpy man running the place.

I got lost in the pages and cried.

Today, by coincidence, I pass by and he is selling the store. “Why are you selling the place?”

“How much if I want to buy all the books in there?”

He said, “100 dollars. There are about 3000 books in there. But You have to get everything out yourself.”

I looked at them. I don’t know what I thought. I was thinking feelings instead of thoughts.

“Go away.” As he took a dollar bill and gave a customer a book.

So I did. And like the last time I had been there, I walked away sad. 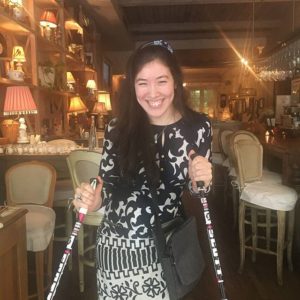 I found an iPad in a cab. The owner, Xian Horn, came down to get it.

What do you do?

She said, “I help people who have some disadvantages in their lives reclaim their beauty and self esteem.

How can I do that?

It’s a practice every day. Find the light around you. Stay away from the darkness.”

It turns out we had many friends in common by coincidence.

I live off of coincidences.

At the end maybe I made a mistake.

I said, how long have you been disabled? 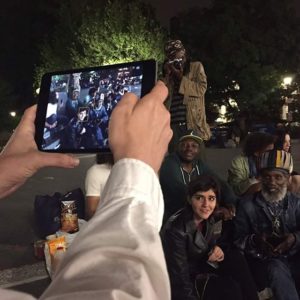 I had to know what was going on.

This group of people were sitting tightly together, all laughing and having fun.

I walked into the middle. “What are you guys doing?”

I want a group of people I can just hang out and laugh and relax and get to know and have fun.

The guy in the middle, with the hat, laughed and said, “Nothing.” And they all laughed with him.

Is it bad to say I was jealous? That I will never have a similar moment?

So I wanted to take a picture of a moment I will never own except on camera.

“Can I take your picture?”

One guy said, “Only if I can take yours.” You can see him behind the group taking mine.

The three of us were documenting.

The man with the smile is living. 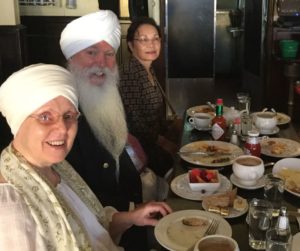 They were all laughing and I was at another table reading a book about the polio outbreak in Newark in 1944.

I asked the waitress, “Why are they so happy?”

I’m shy. But if I don’t ask then I will never know.

I went over to their table.

“You guys seem so happy.”

He laughed and said, “Thank you!”

I asked, “How come you are so happy?”

He said, when we woke we read the obituaries first thing. We weren’t there!

“Why are you a sikh,” I asked. Referring to his beard and headwear.

I said, “Perhaps inappropriately, you don’t look like you are from India.”

“We like it,” he said. “We like to meditate and Sikhs say you are not Hindu, you are not Muslim, not anything. You are simply a child of God.”

I went back to my table. So many people die at 25 but then keep going through the motions until they are 75.

I hope I never wake up and read my own obituary. 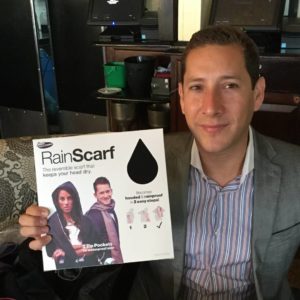 I overheard him talking to a guy. “We sold two million on HSN, then…”

I texted a friend right then, I don’t know how to ask him about it. He’s eating breakfast.

“I wanted to be a rabbi, ” he said. “But it’s a very noble, selfless life. Sometimes it might be hard to raise a family.”

So, he said, I made a skin cream. All organic. Carrots, etc in it. It’s in Walgreens, CVS, Target. We sold that company and I stayed making more products.

How come nobody has made a waterproof scarf before?

Have you had products that failed?

“Many. But you keep trying and trying to get your costs back and you keep inventing new things.”

He showed me a purse for glasses, phones, keys, and am rfid blocker to “Protect your credit card info. We sold 100,000 of these.”

He showed me a clothes hanger but, “it’s for jewelry.”

Why not a jewelry box? “Women want to see what they own.”

He showed me invention after invention. The wait staff gathered around to see. For each invention, someone said, “I need that.”

It might rain later. I’m now thinking I need a scarf. 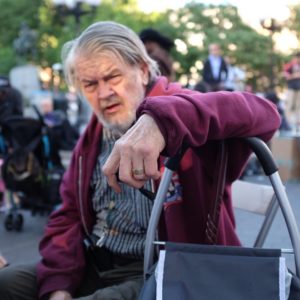 In 1972 he was Bobby Fischer’s coach in the world championship Fischet-Spassky match in Reykjavik.

Yesterday, I ran into him in Union Square.

“They say I withdrew from chess, ” he said. “That’s BS. Chess withdrew from ME.” In 1957 he became the only person ever to win the world junior championship undefeated. 11-0.

My dad once told me when Lombardy came into the chess club he would be the only good looking person there.

“He looked like a movie star.” Grandmaster William Lombardy. “The rich take all the land, right?…..and now they pushed me from chess.” He turned to keep watching the backgammon game next to us.