Trading Stocks The Week after 9/11

I hate that the news stream is filled with news about Osama. Probably it will be all day. Such memories of helplessness it brings back for everyone.

I was four blocks from the World Trade Center, standing on the corner of Reade and Church at 8:45am. Dan asked me, is Air Force One coming to New York today? And he pointed out a plane coming in low. Then suddenly it was right above us. WHOOSH! And it went right into the building. A dad was videotaping his little boy cross the street. I always wondered if he then filmed the plane going into the building.

I didn’t know a single person in the buildings just four blocks away. My mind was telling me, for some reason, that nobody was hurt.

My brain was telling me that an empty robot-controlled airplane had just gone into an empty building, since it was 15 minutes before 9am go-to-work clock rang.

My mind refused to believe anything else for at least another hour (when the Pentagon got hit my mind started to believe the truth).

So my first thought: I have trades on! The market had been going down every day in the days prior to 9/11. I had been buying more and more stocks. I was probably 120% long. Futures had been up that day for the first time. It was going to be a good day. Dan said to me before breakfast, I wish we owned more stocks.

We ran one block away to where my home/office was. We went in the elevator, which was stupid. If the electricity went off then (it did an hour later) then the elevator would be dead.

My hands were shaking so I couldn’t sell anything. I called our broker and said a plane hit the World Trade center and he had to sell everything. He said, WHAT? And he hung up the phone. Their office was in the top of the Empire State Building. So they cleared out.

There was still time to sell. There was even a small bump up in the market because a rumor went out that it was just a helicopter.

Anyway, I didn’t sell anything. I’m going to skip ahead. Skipping past my daughter peeing on the floor because all the adults in the apartment were crying and she didn’t know what was happening.

Skipping past firefighters passing Dan and me asking if we were firefighters also and we said, “no”. We found out later that every single one of those firefighters never came back.

Skipping past the black cloud surrounding the building while everything shook and the power went out. Nobody in my home knew what was happening or what would happen next or what would explode next.

Would we? Everything was out of control but we started to realize that many many people had died, were dying, were going to die. Just a few feet away from us, as paper from the top of the WTC started to land on our roof along with the blackest ash.

I was terrified also for my family. I had no money. I had no way to support them. And I had all of our money in the stock market.  I didn’t want to lose this money. The markets were closed for the week. 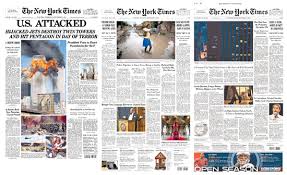 Then they opened. I went over to Dan’s apartment uptown. My apartment was technically still part of the crime scene and, in any case, it had no water or electricity. The day of 9/11 we were supposed to get an offer on the apartment. I was desperate to sell it before I went broke. But that offer never came of course. Didn’t come for another 15 months after that.

When the markets first opened  a week later I went all in. 200% long. Then it went down 5%. Then the next day another 5%. I was buying options. Anything I could do to get more long. For some reason I kept buying Sonus Networks. I put all of my money on Sonus Networks at $7. I remember all the prices of every stock I bought that week.

Every day it went down. I’d take walks in Central Park to clear my head but every five minutes I’d call Dan. “Sonus up?” And he’d say, “No, another 18 cents down.” The market went down 5% a day all week.

I was staying by myself in a hotel on the Upper East Side. Everyone else in the the hotel was parents and relatives of victims. Everyone had photos. “Have you seen him?” “Have you seen her?” Nobody had any hope. Where are all those parents now? Are they still looking for the children they will never find? Everything was a nightmare and there was no way to wake up.

Finally, by the end of the week I was able to get into my apartment. Things are going to change now. I’m a winner.

I bought even more SONS.

Friday morning the market collapsed. I was on the phone with my broker, Gary. SONS was down to $4 and I had been totally leveraged 200%. “I’m going broke!” I screamed at him.

What a bad moment. The whole place smelled from 3,000 dead bodies four blocks away and it would smell for six months. They couldn’t even put the fire out for months afterwards. The park I would take Josie to play in was covered in asbestos. Our roof was covered in asbestos and business cards and random stationary from the blown up buildings. But my body was shaking. I should not have gone home.  All I felt was the non-stop misery all around. I was 16 pounds lighter than two weeks earlier.

“OK,” I said, “I have to sell everything.” And Gary sold everything at about 10:30am Friday morning. And at 10:31 the market went up. And at 10:32 the market went up more. And it kept going up every minute and every hour for the next several weeks. I had sold and gone broke at the very bottom.  If I had held for just a day it would’ve been an enormous sum of money. I deserved to lose it all.

What a sucky story. Watching the plane go into the building, watching people fling themselves off the roof just a block from where I stood as I watched helplessly. My eyes saw it but it was all out of my control. Things would never get better for those people. All hope had completely abandoned them. Today we remember those who died. We cry for them all day. Nothing can bring them back. Or the hope their families once instilled in them. The worst thing ever.

But I also remember that I damaged my family’s future in the weeks to come. I did everything I could to destroy my own family.

The day after 9/11 my entire area had been evacuated. My family, and Dan, were the only ones around. We had refused to leave the apartment when the army was clearing every building the day before. It was the most beautiful morning I had ever seen. Not a cloud in the sky. Tanks and guys in Hazmat suits were everywhere. Now today Osama Bin Laden is going to be in the news stream all day. What a stupid story this was. I wish none of it had ever happened.

Osama Bin Laden, Stockpickr, and the Art of Negotiation