Two Stories About Google We Can All Learn From 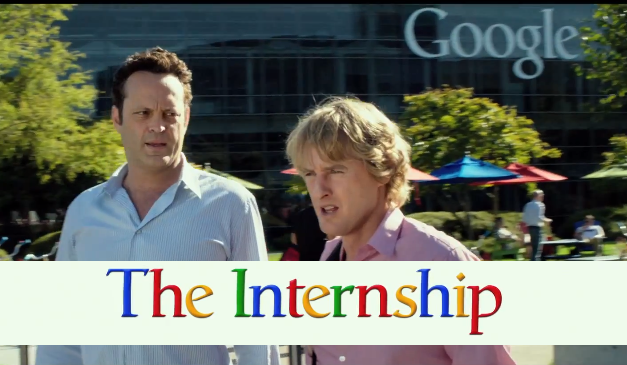 One time Barry Diller was visiting Sergey Brin and Larry Page. The topic of the meeting was to see how the greatest media mogul could work with the greatest Internet moguls.

It was like two galaxies colliding to create something beautiful when seen from light years away.

Larry Page was texting or doing something on his phone.

Barry Diller was disgusted: “Either choose me or the phone”.

Larry Page, without even lifting his head from his phone, said to the biggest media mogul in history, “I choose this”. Referring to his phone.

So Diller spent the rest of the meeting talking to Sergey Brin.

It’s very hard to get a job at Google. They are even making a movie out of the process.

They used to make movies about things like the Vietnam War. Or about preventing Mars from crashing into Earth. Or about a young blonde boy being chosen by a wizened hermit with psychic powers to save the galaxy against his father who wears a black helmet all the time.

Now they are making a movie about how hard it is to get a job at Google. “A sort of Hunger Games for nerds” as Vince Vaughn says in the trailer.

But in the early days, Sergey Brin would interview every candidate.

Like, on a date, you immediately know within five seconds whether you want to have sex eventually with the person you are on the date with.

Sergey Brin would know right away if he was interested in hiring the person.

If he wasn’t interested, he said, “I would try to spend the next hour trying to learn at least one thing from the person so that the meeting wasn’t a waste for me.”

From Story #1 I learn the most important rule of my life: don’t have meetings with someone you don’t want to have a meeting with.

Claudia said to me, sounds like Larry Page was just being rude.

I don’t know. I don’t want to judge. Who knows the dynamics of these billionaire meetings. Too complicated for me.

But you are what you eat. I don’t have meetings with people I don’t like. Ever. Else I can feel it somewhere in my body…I feel bad. Why feel bad? It’s my choice to feel bad or good. If I ate glue I’d probably feel sick. I won’t do that either.

Of course it’s nice that he’s so honest and blunt. Maybe I could learn that also. I feel I am pretty blunt but the way to avoid being rude is to not be blunt to people you don’t like. So it’s simple again: Lesson Number One: avoid people I don’t like. Larry Page doesn’t like Barry Diller.

The second story is a little harder. Yes, it’s good to learn from everyone you meet.

But if I just hoard everything I learn, I might end up with a very big head.

I feel bad for these guys being interviewed. They are probably scared shitless. And here’s Sergey, already decided he’s going to pick some fact from their brain.

Like maybe the person Sergey is interviewing is an expert on whales.

No need for whale people at Google! But can I eat whale flesh? Does whale loin make a good sandwich? Are whale fats healthy for my testosterone?

Too many facts! I don’t need to know so much about whales.

I think Sergey’s rule should be to do the opposite of what he does.

Should I turn a rule on it’s head if it’s a rule coming from the most successful, the smartest, and perhaps the sexiest man on the planet?

People say, “are you the signal or the noise?”

I don’t need to be the signal or the noise.

So I make my own rules for me.

What if I try to GIVE to each person I meet, even if I know there will be no further contact. Even if I don’t learn anything.

Don’t do it in a creepy way. Like, “Here are some chocolates little boy!”

And you don’t want to be patronizing either. Like, “you should really be up on your Shakespeare, young man.”

But what if you really listen to the person, not to steal away his few morsels of knowledge but just to listen to him. Or just be kind. Maybe that’s the gift he needs.

Or heck, maybe he just needs his time back. Rather than spend an hour at Google, he can be walking around in the sun. He can be doing jumping jacks. Or putting his finger in his ear. Give him back his time!

[See, “Give and you Will Receive“]

I admit: I’m jealous of Larry Page and Sergey Brin. I want to play with my phone while saying, “I choose this” to Barry Diller. I want to make the world’s biggest website and cure cancer at the same time.

I want to be the cool guy on the subway with $18 billion and wearing the first wearable computing on the planet.

But maybe I also want to kiss instead of text. Be QUIET instead of MEET.

And feel like I have something to offer to everything around me, even in the smallest of ways.

I’ll never have a job at Google. I’ll never be the master of the galaxy.

But I like having Sergey Brin and Larry Page as my reverse-mentors. Thank you very much.