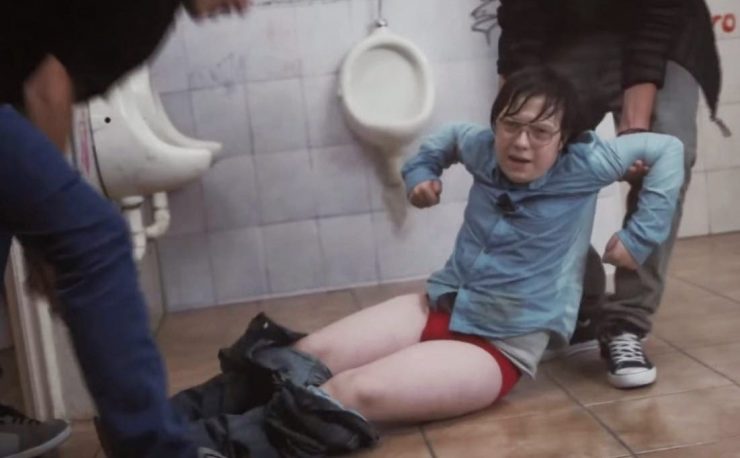 When I was 13 we had a class on square dancing and for the first time in my life I had to touch girls.

As we spun from partner to partner I heard each girl say to whoever was unlucky enough to dance with me, “You don’t have to touch him. Just hold your hand an inch or two from his.”

A few years later, I heard two girls talking about me. Do you see it? Do you see what’s on his face?

I had bad acne. But also bad cysts. From my eye, down my nose, across my cheek. Big purple blotches.

I had glasses. Braces – the kind with the rubber bands, the metal all over. Like train tracks.

I had tangled curly hair that couldn’t be combed and buck teeth and I was very unathletic. I was the last picked for every team. I was the one kid who played chess all the time.

They were so big they were real adults. They had beards and flannel shirts and packs of cigarettes and got girls pregnant and threw desks in the classroom. And would also beat me up.

Nobody said…there shouldn’t be bullying. The teachers didn’t care. My parents had no clue and I wouldn’t tell them because there was nothing they could do anyway. And they were busy with work.

I would skip school as much as possible. Sneak across the farm in my backyard and take a bus into New York City and hang out in bookstores or chess clubs (like a tough guy should).

And I never went to the bathroom during school. That would be death sentence. No matter how badly I had to go I would hold it in. I only peed in my pants once during this time.

I’d go to the library instead of going to lunch. I became more and more shy.

And by the time youth spit me out into the outside world, I was desperate for any attention and any person who can help me inflate my tiny self-esteem.

I’d latch onto the first woman who kissed me. Then, the second and third. I’d be afraid to lose anyone. I’d be afraid they’d see the pimply, braces, tangly, unathletic, shy kid that was still buried deep inside me.

My therapist said to me the other day. You’re 48 now. We are all secretly still that 13 year old. You carry those insecurities with you throughout life.

You have to realize that you aren’t that 13 year old anymore.

OK, doctor, see you next Tuesday.