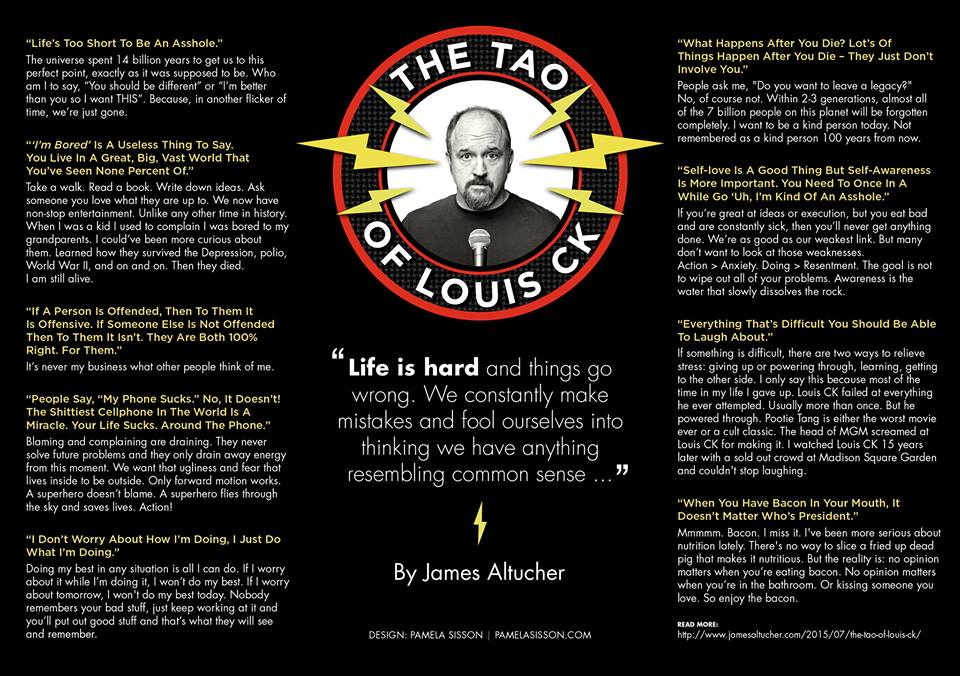 I do standup comedy now up to six times a week. And I’m even less reluctant to write about it now than when I went up zero times a week.

Because of the simple cliche: the more I DO, the less I KNOW.

Like I did when I was ten years old and got a home run that one time (and only one time) in Little League. I’m a kid again. I’m in love.

He turned it down. How come?

Because that’s not how you get GREAT. Don’t take the easy way out.

Instead he went on the road to really get better at standup comedy. He wanted to learn every nuance. You have to go on stage 1000s of times.

Then he failed at a pilot for CBS. Then his movie, Pootie Tang was a disaster (although I loved it). Then his HBO show “Lucky Louie” was cancelled in one season.

My big regret (and yes, I regret) is that the day after I saw it cancelled I saw Louis CK walking on 6th avenue and I was too shy to tell him I loved the show.

Then his show “Louie” was a success because he figured out how to do it on his own terms (the only show in television where he refused to show it to the network until the day before it aired).

He “chose himself”. He only did shows on his own terms. Now he produces many more shows. Now he releases his specials on his website direct to consumer.

He shot AN ENTIRE TV SERIES, Horace & Pete, in secret, and released it only on his own website (who needs networks?)

He finally broke through at standup when he started speaking his own stories, his own voice.

He went from a mostly aburdist comedy style to speaking deeply personal truths we can all relate to.

And when he went through those stories, he started making jokes and issues that effect everyone.

He broke every barrier. He shocked everyone. He spoke the truth. And he learned every aspect of comedy: performing, writing, producing, directly, writing.

He learned every subtlety, every nuance. Nobody learned as much as him.

NOW, he did it again.

He shot, mostly in secret, an entire movie: “I Love You, Daddy” and it’s brilliant.

His new movie comes out November 17. I was fortunate enough to see it last week in a screening.

He was the star. He wrote it. He directed it. He produced it. He can do all of that because after 30 years of deliberate practice he is the master of every aspect of creating a work of art.

Many great actors and actresses are in it including his constant co-star Pamela Adlon, who I think is an acting and comedic genius, and John Malkovich.

But there’s one piece of dialogue from the movie that I will have to paraphrase that I think is the key to everything I’ve done in life since my life started going on an upward trend.

They meet for the first time and Louie is awestruck.

Malkovich says, “What are you working on?”

Malkovich, “Do you love it?”

Malkovich says, “Then why are you doing it? Do you need the money? Is someone forcing you?”

Louie is nervous and shrugs his shoulders, “Because I can?”

Malkovich says in a confused voice, “Why do anything you don’t love? It won’t be good.”

It won’t be good.

Listen to my podcast episode with Jim Kwik below.