What Disguises Do You Wear?

The guy dressed as a construction worker was begging me for money. It was 5am and I was on the corner of Wall Street and Broad. To my left was the New York Stock Exchange and in front of me were the steps where George Washington took his oath of office. Policemen with dogs were patrolling. 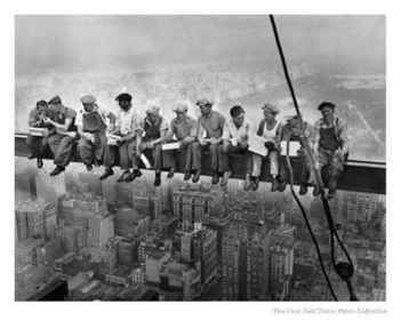 The guy had a hard hat on, looked dirty as if he had been working day and night in the holes and underground ecosystem that powers NYC with its wires, its sewage, its steam, its electricity.  “C’mon guy,” he said, “my buddies left and now I just need $10 to get back to Staten Island because my wife is sick and I have to skip my shift this morning.”

Not only did he have his hard hat on he had that orange vest with the yellow stripe so that people could see him in the dark. He had every appearance of a construction worker. I reached into my pocket. “Thanks a lot, dude,” he said. But then I saw one of the cops with the dogs shake his head “no”. I said, “I don’t have anything, sorry.” And the construction worker said, “C’mon man, my wife is sick, I just need $10 to get the ferry.”

But I walked on. I went up to the cop he shook his head no. “That guy is here every day,” he said. “He’s not a construction worker.”

The sun started to come up. This was in March, 2009. The stock market was still crashing. The unemployment rate was skyrocketing. I was about to get fired from something. From many things. I was making money from about four different sources, some of them competing. All of them would fire me within a month. I was scared.

Everybody is in disguise. Who will you be in disguise as today? A good father? A good husband? A maniac? A good neighbor? A bored friend? An ambitious partner? An up-and-coming employee? What suit will you put on? How will you beg the world for your piece of it? What cops will circle around and try to prevent you from getting what you want?

If only I could want nothing, beg for nothing – then nobody would stop me.

A year later I moved away from Wall Street. Recently TEDxWallStreet asked me to speak. I looked down the list of speakers. Do I really want to be around these people? Do I really want to go back to that exact spot (the New York Stock Exchange). “We’re trying to give a good impression of Wall Street,” the sponsor said to me, “so think of something to say along those lines.” Did I really want to do that?

Then a week before the event I said, “no”. I said I honestly had nothing to say.

So I went into disguise and I begged and got what I wanted. The construction guy didn’t. TEDxWallStreet didn’t get what they wanted. But I said, “yes” to TEDxHuntstillve even though its 1000 miles away.

And what are my disguises today?

Angry thoughts from events that took place years ago? Thoughts of “I could’ve done X, Y, or Z ?” in the distant past. Worries of the future? Reactions to what people say about me? Feelings like “I have to respond to just this one comment!” I think back to all the disguises I’ve worn. I’ve been a master of disguise. Hiding big lies, small lies, white lies, black lies.

All of our misery comes from wanting at all costs to remain Tom, Dick, and Jane. Normal. Our molecules, our atoms, want to burst out but we squeeze them tight inside with our mental constipation. The real ME must never be seen or I will be laughed at, sneered at, abandoned, and Poverty will wipe itself  with the last microbes that are left of me. I get scared.

Most of Peter Parker’s stress was that he had to hide his Spiderman identity. This body of ours, this disguise, is in constant revolt against the abominable scam of having to endure.We don’t need to do that anymore. When you take the disguises off, the superficial feelings of failure, of anger, of sadness that society has programmed into us- when you just peel the past off and refuse to worry about the future, you become the superhero you were meant to be. The first person you then save is yourself. Then the world down below will see you swinging free, from rooftop to rooftop.

TEDxHuntsville told me I could speak about whatever I wanted.  I’m  going to go to a place I’ve never gone before and speak about something I’ve never  spoken about before. And if every day I keep shedding my disguises, a practice my mind will try and refuse to give me the courage to do, maybe I can say something I’ll be proud of.

[What disguises do you think you wear?]