Why I Wanted to Interview Henry Blodget

Last week I interviewed Henry Blodget about the fallout he experienced when (and after) he was going through the whole Spitzer crusade against him. The interview will be online at Businessinsider.com shortly.  [Update: Here it is] It reminded me of  a few years ago when I was talking to a multi-billion dollar hedge fund manager that Spitzer had also gone after in one of his glorious escapades.

“My secretary told me Spitzer was on the phone,” this guy said to me, “So while Spitzer was on hold I literally got on the  other line and got $60 million ready with my bank just to instantly settle with Spitzer. Who needs the grief?” he said to me.

By contrast, Henry Blodget got grief from Spitzer. Right now he says “there’s nothing personal” but I never believe when someone says that. When someone is trying to kill you and your family, its always  personal. I wanted to interview Blodget to see if I could make him hate someone.

Not to find out what happened. We all know what happened. Blodget was the biggest Internet analyst out there. The Internet went bust for a year or two. Blodget sent an email that differed with the analysis in a future report he put out. So we all wanted to publicly hang him and Spitzer was the sheriff in town to do it.

For awhile, we hoped for blood. And Spitzer gave us that. Going for Blodget and then others. But blood doesn’t feed our families and ultimately the taste of it is too bitter. So as a society we moved on. We didn’t care anymore. We found the next thing. And the next. And then the next.

But I wanted to talk to Henry. How did he move on? How did he get out of bed when everyone he had initially called friend now avoided returning his calls. When he wrote a $4 million dollar check to the SEC and then had to avoid going broke when he was banned from the only industry he had ever worked for.

He was an English lit major with nobody returning his calls and his bank account being drained and a family to feed.  The object of public scorn and shame. “I admitted no wrongdoing” but when someone writes a check, you have to ask the question. 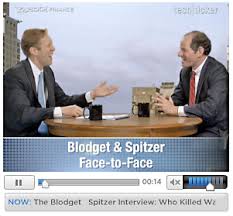 I wanted to find out if Henry hated the man who had done this to him. I wanted to find out how he faced his family and friends. How he then started writing again, and (horrors!) analyzing stocks again and then (horrors again!) started a financial media company (The Business Insider!). Why didn’t he run away and hide?

We’ve all been in post-traumatic stress. The 90s are an ancient myth now. Since then we’ve had the dot-com bust. 9/11. The housing bust. The financial crisis. 10% unemployment. Enron. Snooki. As a society, we’re depressed, scared. We lash out.

(Ashley Dupre has also bounced back with a NY Post column)

Henry asked me why I do this blog. Several reasons:

–          To show people they have permission to fail. It’s a fallacy we grow up with that “failure is bad”. It isn’t, unless you let it swallow you and devour you.

–          To show people there are easier ways they can be happy. They don’t have to stress owning a home, or saving money to send their kids to college.  To pretend that working a corporate job is the safest way to happiness. It isn’t. There’s alternatives. My blog is about the alternatives and how to achieve them to get happiness.

Henry Blodget’s life turned upside down in a very public way. His failure and shame were on full display. I wanted to find out how he recovered from that. So after much badgering for an interview, we sat down together. And I found out what I wanted.

[Stay tuned for the full interview at businessinsider.com. I’ll also link to it here.]