Why I Write Ideas Every Day

The last time I used a phone booth I ended up with shit all over my head. I had to get tampons or diapers or some other family-related product that in 33 years of living I had never had to get before. So in the three minutes it took for me to walk from my house to the drugstore I forgot completely what it was. When you are dead broke and scared, a consequence (a symptom? A cause? A superpower?) is that you forget things. Tampons? Diapers? I had two kids, a rapidly depleting bank account, ongoing depression that I wasn’t treating in any way at that particular moment – no medication, no therapy (other than couple’s), no daily practice (I mistakenly thought I had no time, because I was too busy worrying about everything), so I would forget everything.

Earlier that day Savio called me my  home phone. In the early 21st century they called that “the land line”.

“You haven’t shown up for the last three board meetings for Vaultus,” he said.

I mumbled something about 9/11.

“We all had 9/11!” he said sharply. I can say “sharply” because that’s how he spoke. Almost staccato. His voice was like a pencil snapping in half over the phone line.

So I got kicked off the board of Vaultus. I wouldn’t speak to Savio again for 2 years when he called me and asked me if I would give them a recommendation. Calpers was looking at investing in Investcorp’s venture fund. I gave a glowing recommendation and they invested.

After Savio kicked me off the board I had to go to the drugstore. Somebody’s genitals needed to be plugged by something. That’s all I could remember. There was a leakage happening and it had to be plugged so if I could please brave my depression, the weather, and the complexities of drugstore aisles (you  ever have that experience where “Feminine hygiene” is clearly labeled for aisle six but nothing on aisle six seems to have anything to do with hygiene or “feminine”. And now you’re in drugstore twilight zone, where every aisle contains an assortment of different sizes of licorice, pens, toothbrushes, XXL condoms (right next to a rack with licorice) and thousands of other items (drugstore lipstick) that you will never in your life buy but you wander all around and the words “Femnine hygiene” never come to mind). I didn’t have a cell phone then. Who needed one? It was 2002. I had no job. I had no friends. I had no mistresses on the side. I had nobody anxiously calling me to do a deal. I had nobody I was calling back and forth and saying, “I’ve got an idea for a deal.” I had no ideas. My last big idea occurred the day Intel crapped the bed on their earnings numbers. I panicked and thought, “this is is it. The world is over.” My brilliant idea was to borrow as much as possible off of the equity of the apartment I was destined to lose and then move to South Dakota, which, for all I knew, had no extradition treaty with New York City. Nobody would find me in South Dakota. That was my last idea.  The bank turned down my request for a loan.

All of this is to say, I had to use the payphone outside the drugstore to call my land line to find what hole in whose body exactly I had to plug and what aisle it might be found in. Could they deliver maybe?

So I picked up the phone and immediately started to dial. I had hit about five digits when I realized there was no dial tone. Since 1958, by order of the standards board of the Federal Communications Commission, there had been dialtones on phones. This is why phone calls sound so bad now and Skype sounds so clear. Phone calls all run along protocols designed 53 years ago. Skype just depends on how fast your Internet connection is. I can’t even hear when people talk on the phone anymore.

Personally, I think phones are dead. Even cellphones. Even “Smart” phones. Anything that uses the 1958 protocol is dead because people like me can’t even hear. It sounds like a séance when you talk on the phone. Someone is mumbling while their voices traverse antique protocols.

So I’m at the payphone, dialing five digits, and I realize there’s no dial tone. I immediately suspected foul play. I removed the phone from ear but it was sticky and the phone was having trouble becoming detached from my face, ear, and hair.

Why is that? Because there was, literally, shit all over the phone. A lot of it. Someone must’ve taken a bag of shit and completely covered the phone with it. Human? Dog? Dinosaur? I have no idea. But it was somewhat fresh and now all over one side of my head. I hung the phone back up and walked home.

Why didn’t I notice this when I first picked up the phone? A Zen Buddhist might say I wasn’t being “mindful” and this is certainly true. I had just been kicked off the board of a company I had started. There was smoke still coming out of the ground three blocks away where the first foreign attack on US soil in 200 years occurred. I was losing money every day just by breathing and I had two babies to feed.

I went home. There was shit all over me now because it was dripping down. So now I was leaking also. “Who would do that?” I thought. Who would put shit on the phone like that? I was sort of half crying but only half because the other half felt dead inside. How much worse can this get?

I took a shower.  I took a bath. I put my face in the sink. I took another shower. I called my couple’s therapist even though it was just me. She said, “are you sure you took a shower. There could be disease on that poop.” Couples therapists don’t curse.

When I was clean enough I took a walk. I went over to the Bowery where there’s a few block stretch where, out of the stench of homeless, drugs, rats, prostitutes, and run down hostels and hotels that scour the Bowery, there’s a three block stretch of stores where every restaurant in the city shops for all of their supplies. I bought 100 waiter’s pads for $10.

I found a coffee shop and ordered up non-stop coffee to get my brain out of it’s perpetual fog. Whipped out a waiter’s pad and a new pen. And started writing down any ideas I had on the pad. Ideas for new businesses, ideas for trading systems, ideas for people I wanted to meet. Ideas for books I wanted to write. Ideas for software I could write, websites I could make, movies I could draft, connections maybe I still had, jobs I could apply for, inventions I could develop.

I wrote all afternoon. None of my ideas were any good. My idea muscle had atrophied too much. Every single thing I wrote was useless and I forget what they were (except for maybe one I still have yet to execute on). But I got excited. Something sparked. I finally felt clean. I felt excited. I stopped adding up negative numbers in my head for those few moments I was working on new ideas.

The next day I woke up early and I did it again. More ideas. Bit by bit I came back. And now ten years later I still write ideas every day. And, like the Mighty Underdog after he retired, I never used a phone booth again. 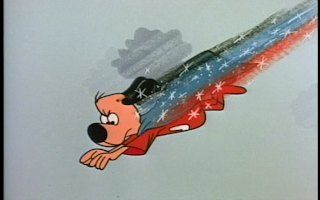 B) For more, you can get “I Was Blind But Now I See” from your local Amazon bookseller for $4.89 and then get a free PDF of my next self-published book when it comes out.

C) And finally, what was the  first thing you did in a situation where you hit bottom or close to bottom?