You Should Run for President

I am officially a candidate for President of the United States in 2024 and you should do it also.

I went to the website for the Federal Elections Commission.

I filled out all the paperwork. It took me 10 minutes. It cost me zero money. Now I am an official candidate in the eyes of the government. You can search for me there. 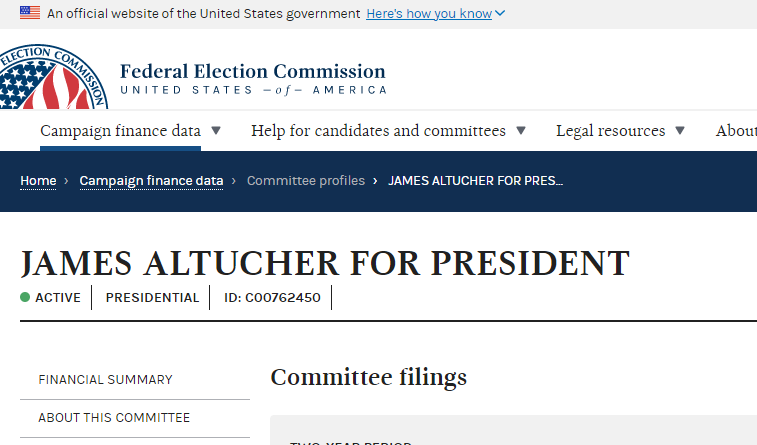 You should do this also. God speed!

First off, this is an experiment.

In my book, “Skip the Line,” I discuss how the “10,000 Experiments Rule” is one of the quickest ways to “skip the line” and be in the top 1% (and monetize) whatever field you love.

At any given point, I usually have five or six experiments going. You should too. It’s not hard and it’s fun. And there’s no pressure because most experiments fail.

That’s the nature of having a theory and testing it. Most theories are wrong but that’s how we learn.

The characteristics of a good experiment:

Most experiments fail but this is why they are valuable:

– By definition you are doing something that is unique to you and perhaps the world. Hence the need for an experiment.

Thomas Edison famously tried 10,000 different filaments before getting a light bulb to work. Then he created the lightbulb and started a tiny company called General Electric.

General Electric is the only company that was part of the original Dow Jones index in the 1890s that still exists today.

Sadly the company, Distilled and Cattle Feeding Company is no longer part of the Dow. They got acquired.

Many people say they don’t like the two-party system. People feel obligated to vote for the lesser of two evils else they believe a non-vote is really a vote for the other side.

150,000,000 people vote. Your one vote will not help. And when I ask people about the issues I usually find that most people, including myself, don’t know the issues.

They just know what the party they vote for vaguely believes. But not even really that.

People will say, “If you don’t vote for one of the two parties then you should have no right to have a voice in our society.”

– If anyone says, “You have no right to have a voice,” you can reply, “I’m running for President of the United States.”

– When you DO something, it starts to form cognitive biases in your brain. For instance, I feel I have more of an obligation to have a stance on the issues or at least a stance on how to govern and lead.

– Just by doing the process, I learned new things about how our government works. It’s interesting to see how many people are running for which office and other factors involved in running.

That’s statistically impossible and yet it happens because the way our system is set up leads to cognitive biases that polarize people.

I searched on newspaper-dot-com (an archive of every newspaper dating back 250 years or so) for the phrase “most important election ever.”

If I like a candidate it would be impossible to agree with him or her on everything. I should listen to how the candidate thinks about issues and then decide if I like his methodology for having an opinion, pivoting if things change, etc.

If you run, I set up a Facebook page, “President 2.0” where you can announce you are running (perhaps you signed up at the FEC) and you can start to present your issues.

Issues can be nuanced. You don’t have to just say “Bad climate change” or “No war.” You can have your own opinions.

Nobody can stop you. You are running for president!

Have a cool name for your political party. Maybe your party is “The Bachelor Party” or “The Pre-game Party.”

I’m going to call my party the “Skip the Line Party.” Because I don’t believe there should be gatekeepers to expressing your opinion and having a voice in society.

If you experiment in life enough, you will learn a lot, have fun, and eventually find yourself Skipping the Line in fantastic ways you never would have thought.

I have examples I will share over the next few days and weeks.

But for now, spend 10 minutes at fec dot gov. Run for President of the United States (it doesn’t cost any money) and then announce it at the President 2.0 Facebook page.

Then you can announce your issues if you want. Or announce how you would govern. And participate fully in our great democracy (yes, I know, I know, people will say, “It’s a republic!” Shut up with that stuff. )

In 1980 I was obsessed with the Federal Elections Commission.

I tried to interview every random person who was running. My interview skills consisted of “Why are you running?” and “What did you eat for breakfast today?”

As the great Jim Boren told me when he was running for Vice-President in 1980: “When in doubt, mumble.”

(Me on the campaign trail…)