Is Michelle Obama Ruining the American Dream For My Kids

Michelle Obama whispered to me a love story the other night. It was the love story she built her life around. It was her American Dream come true. And now she wants it to be the American Dream for you and me. For our children. For theirs. 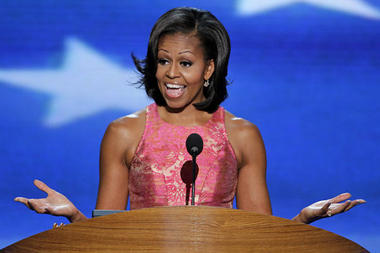 It’s very sweet and she says it with sincerity. She was young. She was in love. And yes, she was in so much debt. Her (plus Barack’s) student loan debt added up to more than their mortgage. I do think she’s sincere when she says Barack wants every college-aid student to be able to get student loans and be able to go to college. That was his American Dream also. And with that debt, with that degree, he rose to the top. He’s the Emperor of Planet Earth.

The problem is: the American Dream was never about debt. I can quote every founder but I’ll stick with one: Benjamin Franklin: neither a borrower nor a lender be. The American Dream was about how everyone could rise to the top regardless of class, religion, creed. You didn’t need a college degree. You didn’t need to take the unnecessary risk of enormous debt to survive.

30 years ago she had so much student loan debt as to surpass her mortgage. I find the story to be romantic. And I believe that she has the best intentions. But it also shows me how sadly disconnected she and her husband are to what’s happening on the streets of America.

First off, since 1977, tuitions have gone up 10 times faster than inflation. Three times faster than healthcare, which her husband made a national issue all the way up to the Supreme Court. It doesn’t matter how low interest rates are if you have to borrow more than you can reasonably pay back in a lifetime. Student loan debt topped one trillion this year for the first time ever. For the first time ever it was greater than credit card debt. For the first time ever, we are graduating a generation of indentured servants instead of innovators who will bring about the next technological evolution in America.

College was a route to success for many when the young Barack and Michelle were in love and in debt. But that was a long time ago and the world has changed, Michelle. Please listen to me because I want to help your kids and mine.

So I decided to hit the streets myself and find out what was going on. Are you right, Michelle? Will love and debt carry us forward into the new frontier, the frontier bother personal and external that has always defined the American.

I went to the NYU campus and talked with some students. My mother and father went to NYU. My sister went there. It was a college where people could reasonable afford an education that would then help them find a job.

The first person I spoke to was: 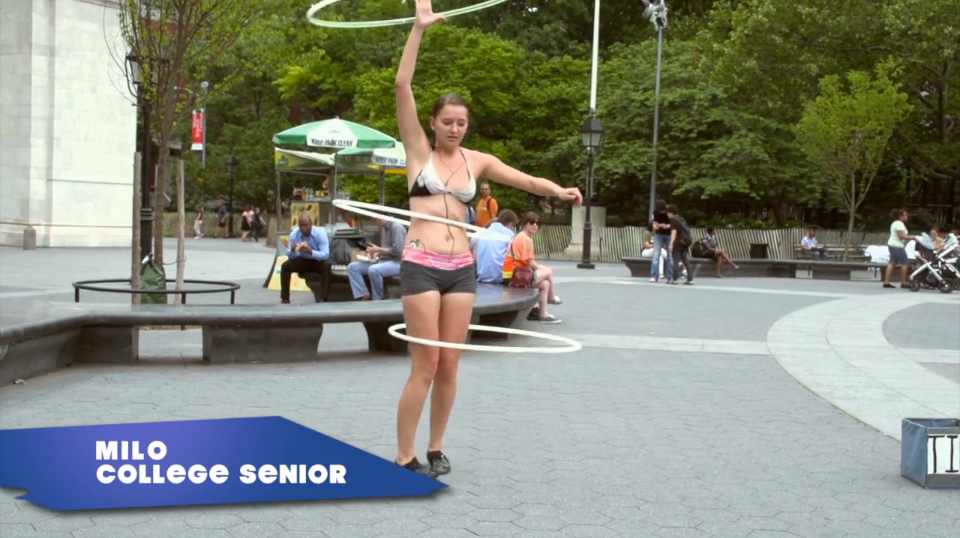 She was hula hooping to raise some spare change to get a head start on paying down her loans. She was also a fulltime nanny and hoping to take some time off to get an internship that will get her the sort of connections to get an agent so she will able to pay down her student loan debt. I admired how hard working she was. Everyone should work so hard. But I felt the end goal was to get out of that debt. And there was no sense of when the debt would be paid off.

I then spoke with: 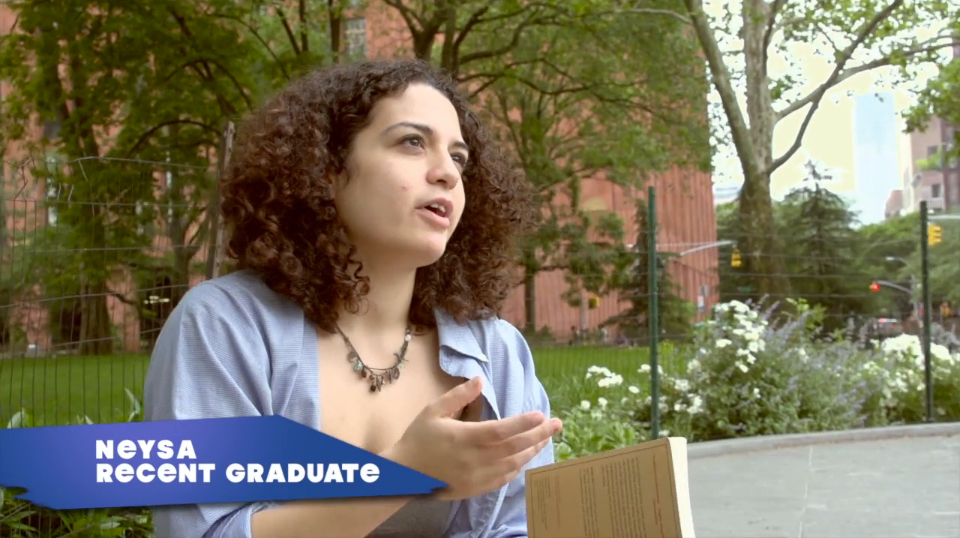 She told me her plan:

A) find an ideal job

B) set aside 50% per month to pay down her debt and within 20 years it would be paid off.

I also didn’t have the heart to tell her this would not work. She was a theater major. No matter what her ideal job was, it’s going to be taxed around 30-40%. Then another chunk would go towards paying rent (and with housing frozen, rents are going up). What would be left for her to be creative. To be able to think about new ideas and discover new things about herself. Her ideal job is going to turn into two jobs, one by day and one by night, so she can afford this student loan debt.

She told me about her brother who didn’t go to college. When I asked her what her ideal job was she thought for a second and then said, “huh, I guess it’s the job my brother currently has.” She laughed at the thought. She hadn’t needed college. Her brother’s debt: $0.

I then spoke with these two guys. They were recent graduates and already starting to pay down their debt. They worked in an eyeglass store. “We didn’t need to go to college to do what we were doing,” they told me. “I’m going to be paying off this debt forever,” one of them said.

And Jason is right. Over 50% of the unemployed have college degrees. Why does the government want to lend them more money? Why are tuitions still going up, Michelle? Is a trillion dollars of debt and permanent indentured servitude the new American Dream?

Michelle, students aren’t learning the basic skills they need: how to have ideas, how to sell them, how to survive failure and depression. The Great Recession has been a boon for psychopharmacologists handing out the latest MAO-inhibitors to people who lost families, homes, jobs, bankruptcy, and still can’t pay down their debt. The past four years have been a nightmare. And yet…tuitions still go up, as more young people are fooled into thinking this is a way out. And student loan debt has turned into a romantic, first apartment, chinese dinner on the floor, we can make it, to the horror of young people realizing they will never be free from it.

Maybe there’s an alternative, Michelle. Maybe young people can still save America. They can travel, they can apprentice, they can go back to the basics of how inventors (eveyone from Thomas Edison to Henry Ford to Bill Gates, Steve Jobs, Mark Zuckerberg) were able to create and drive forward American innovation without a college degree. I wrote a book, “40 Alternatives to College” but my two daughters, who look up to you Michelle, are torn as to what this all means. They are not equipped to understand the magnitude of a generation of 22 year olds taking on a trillion dollars in debt.

You know how you can get rid of this debt? Only two ways. A judge can declare you “legally hopeless” AFTER you declade bankruptcy. Bankruptcy alone will relieve all of your other debts but not your student loan debt. The US government, run by your husband, will still seize all of a 25 year old’s bank accounts and garnish any wages if they are bankrupt and not paying down student loans. You have to be also “hopeless”. And then there’s only one other way to avoid paying down the debt. You can go to war. And there’s plenty of it that your husband has supplied us. Iraq is now just a colony of Iran. We’re still in Afganistan. We’re bombing Syria. We have military bases in 195 countries.

I want my children to fall in love also, Michelle. But times are different than when you and Barack first kissed. I don’t want my children to be indentured servants. It’s not fair to many Americans that they will be paying tuition ten times higher than you had to pay. It’s because of student loans backed by the government that colleges have raised tuitions with wild abandon.

I don’t want them to go to war, Michelle. I hope to god that despite all the rhetoric about love and debt, that the American Dream is still alive for your children and mine – that initiative, innovation, and ingenuity will help our children rise by their bootstraps, not be held back by debt, so they can create the tools they need to lead us into the 21st Century.