Our Country’s Secrets (Untold Stories From the CIA & Secret Service)

“So I was in Secret Service headquarters and…”

I had to interrupt. “What do you mean? Why’d the Secret Service want to talk to you?”

I didn’t understand. Because Brad Meltzer is a writer. He’s written 11 bestselling thriller novels. So how did he get inside?

“I always talk to the top CIA guys when I’m writing a new book,” he said. “I want to know the newest tricks.”

I stopped him again.

“I still don’t understand. Not everyone can say, ‘Oh yeah, when I’m writing a new book I call up the CIA.’”

He broke it down into three parts:

“OK, but how did you get started?”

But he was wrong. They did help. One CIA guy said, “I read your first book. I liked it. And I want to help you with this one.”

He was reading something online. And saw a footnote that mentioned a secret plot to kill George Washington.

“I remember thinking, ‘Is this true? Is this nonsense?’ But it turned out to be true.”

“In 1776, there was a plot to kill George Washington. And when he found out about it, he gathered the people responsible, built a gallows, and hung them in front of 20,000 people.”

It was the largest public execution in North American history at the time.

“But it’s barely documented,” Brad said. “I found this story almost a decade ago.”

And he wanted to write it for years. But his publisher rejected him. Brad had sold millions of copies of books. And they still said, “Not interested.”

So he found another publisher.

Now it’s on the New York Times bestseller list. And it’s not an ordinary history book. It’s a thriller. 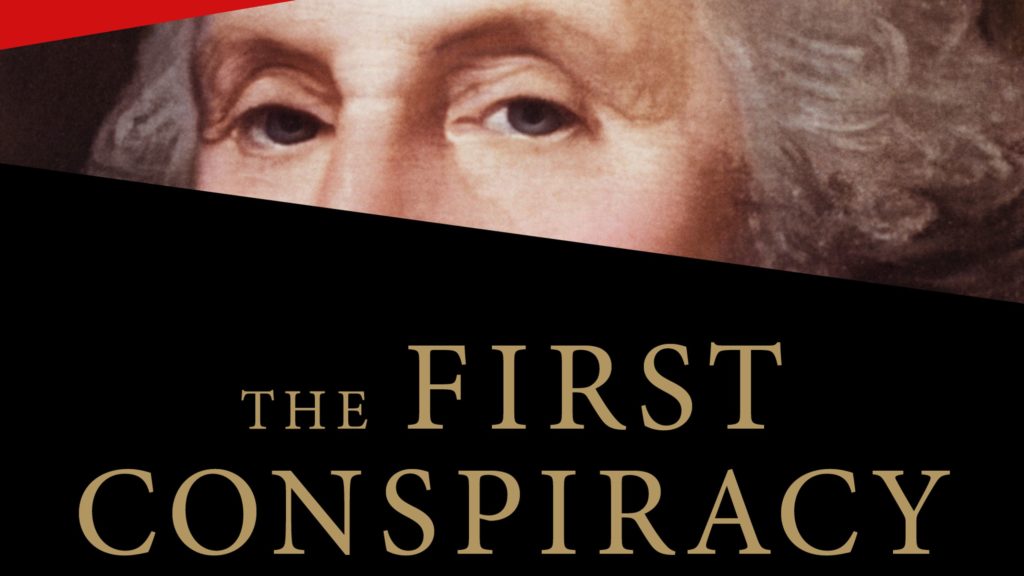 He wants to get you hooked to the secrets and the crack. “I write what I like to read,” he said. “I want it to go quick. And I have no patience.”

“What’s an example of a hook?”

He gave me a line. Page one, chapter one, first sentence: “Eight minutes from now one us will be dead. No one could see it coming.”

Now he’s doing this with history. He’s changing the genre.

“We teach our history, sadly, as if it’s a bunch of dates and facts you have to memorize. That’s not what history is at all. History is a selection process. I mean everyday you can go out and be a better person. And you can make history.”

“Wait, what do you mean? I feel like you’re communicating a deep thought here.”

He told me how George Washington created a real legacy. The first story we hear about him is the apple tree. He didn’t cut it down. And that meant he was honest. And had integrity.

But that’s not his real legacy.

George Washington could’ve been “King George the 1st” of New York. He could’ve served for life. But he walked away from power. And ended his presidency after two terms.

And yet, we almost didn’t get to. If George didn’t set up a network of spies and take measures to defend his life, he’d be dead before he died.

That’s what Brad’s latest book (and this podcast) is about… history’s untold stories and secrets.

1. HOW THE CIA COMMUNICATES IN SECRET
Brad called up the CIA. “How do I communicate with someone in secret?”

He needed to know for one of his books. They know his work. So they told him.

“Make a new email account. Write an email. But don’t send it. Just save the draft.”

Step two: “Give the username and password to whoever you’re trying to communicate with. They log in, read the draft, and write a new draft back.”

Nothing ever gets sent. So nothing is traceable.

2. HOW IMPORTANT PEOPLE ESCAPE
I asked Brad, “Is it true that the president only stays at the Waldorf Astoria when he comes to NY because it has tunnels underground?”

“Yeah, The Waldorf is one place, but I don’t think it’s the only place,” he said.

He told me about another building in West Virginia with tunnels. They used it to evacuate Congress in emergencies. But The Washington Post found out about it.

They can’t use those tunnels anymore.

“That’s the sad part,” Brad said. “So many of the places have been revealed.”

When Brad first wrote about the White House tunnels, he showed it to a Secret Service agent. And said, “Is there anything you want me to change?”

The agent said, “Listen, Brad, if you can figure this out from your home office, do you really think a terrorist organization with millions of dollars at their beck and call couldn’t do the same?”

He read between the lines.

But I disagree. If you’re not in the CIA, you’ll always feel like Brad’s books are taking you on the inside.

3. HOW TO BE UNDETECTABLE
The Department of Homeland Security called up Brad. They wanted to brainstorm different ways a terrorist could attack the country.

“Why are they calling me?”

“If I’m the best they can do, then we’ve got problems.”

Then he started researching.

Brad went back to his contact at the CIA. And said, “Wouldn’t it be cool if you found out Washington’s spy ring still existed today?”

“What makes you think it doesn’t?”

We all have secrets untold about our lives. George Washington isn’t alone in that.

But not everyone is going to have a Brad Meltzer in the future… someone who wants to dig into your past and reveal it to the world for entertainment.

I always say, “everyone has a book inside them.”

Some people have many. But Brad has another idea for preserving your legacy…

Write your own obituary. He tried this.

He hired an obituary writer from The Wall Street Journal.

And something odd happened.

The reporter sent it to him an unfinished draft.

It listed all his achievements, said where he was born, who his wife and kids are, etc. And then it ended mid-sentence with these three words:

“And I’m like, ‘Wait, what was I? Was I good? Was I bad? Did I matter? Did I achieve greatness? What was I?’ And I know, James, I can see it on your face. You’re asking yourself right now what are you? Right?”