Everything Is F*cked (A Conversation About Hope)

WHY THE HOPE AND MEANING IN OUR LIVES IS BEING DESTROYED. AND HOW TO BRING IT BACK.

Hitler invaded Poland. So the soldiers started an underground, guerilla fighter network. And as part of that network, they wanted to infiltrate Auschwitz.

“They didn’t know what Auschwitz was at the time,” Mark Manson said. “They thought it was just a prisoner’s of war camp. So the idea was, ‘If we can sneak into Auschwitz, break a bunch of Polish soldiers out, we can get a lot more men fighting back against the Nazis.”

So Witold Pilecki snuck in.

This story is in Mark’s new book, “Everything Is F*cked: A Book About Hope.”

It’s sort of a modern day, “Man’s Search For Meaning.”

Because Viktor Frankl’s book is about surviving the Holocaust.

Social media arguments. Politics (of all kinds: government, office, etc.) And other forms of self-inflicted pain.

So it doesn’t really compare at all. But in some ways it does.

Because Mark realized he let the modern day version of “suffering” get to him. (More on this later).

So he went on a quest for hope. He wanted to find out… where does hope come from?

“He was the first person to alert the world to the Holocaust. He got intelligence out. And it eventually worked its way to London in 1942.”

But people didn’t take him seriously. They thought he exaggerated

“And then by 1944, he realized he needed to get out. He’s one of 144 people to ever escape the concentration camp. And he’s the only person to ever willingly go in.”

In the book, Mark writes  “Being heroic is the ability to conjure hope where there is none.” That’s what Pilecki did.

He had this meaning deep down inside of him. But we don’t have that today.  So I asked Mark, “How does somebody today find meaning?”

He said, “This is the paradox of hope that I talk about. It was easy for Pilecki to find meaning. And hope. Because one of the things that generates hope for us is conflict.”

Which is why people are going out of there way to find conflict. In the worst places. (Mostly online.)

People always write me, “How do I find my purpose? Where is the meaning?”

I’ll tell you where it’s not.

Here’s 3 lessons from Mark Mason on where to NOT find hope:

After WWII, China went back to their Civil War.

Mao Zedong became the leader for about 3 decades. He drastically limited the language people could use. This affects your brain. It suppressed your range of emotions.

It’s one of the ways he kept control.

Now we have emojis. Which has a similar effect.

We’ve voluntarily limited our language. And, subsequently, our emotional responses.

AND, worse. We’ve normalized it.

But it’s not normal. Imagine you came up to me with sad news. And I just said, “Aw. Yellow frown.”

We don’t use emojis offline because it’s weird. But for some reaso, we ignore this online.

There’s no prescriptive advice or lesson here. Other than to try this exercise:

Try to undo the normal. Make a list. What are 10 things I did today that would confuse the hell out of people 30 years ago. Practice noticing the weird things we’ve normalized.

Doing this makes me less angry. Which is important. Because anger creates resistance. And resistance blocks creativity.

Instead of saying, “This is terrible.” Look for the weird. Instead of limiting yourself to what’s become “normal,” get out of habit. Do something that changes your behavior.

The more I practice seeing this, the funnier my eyes feel. 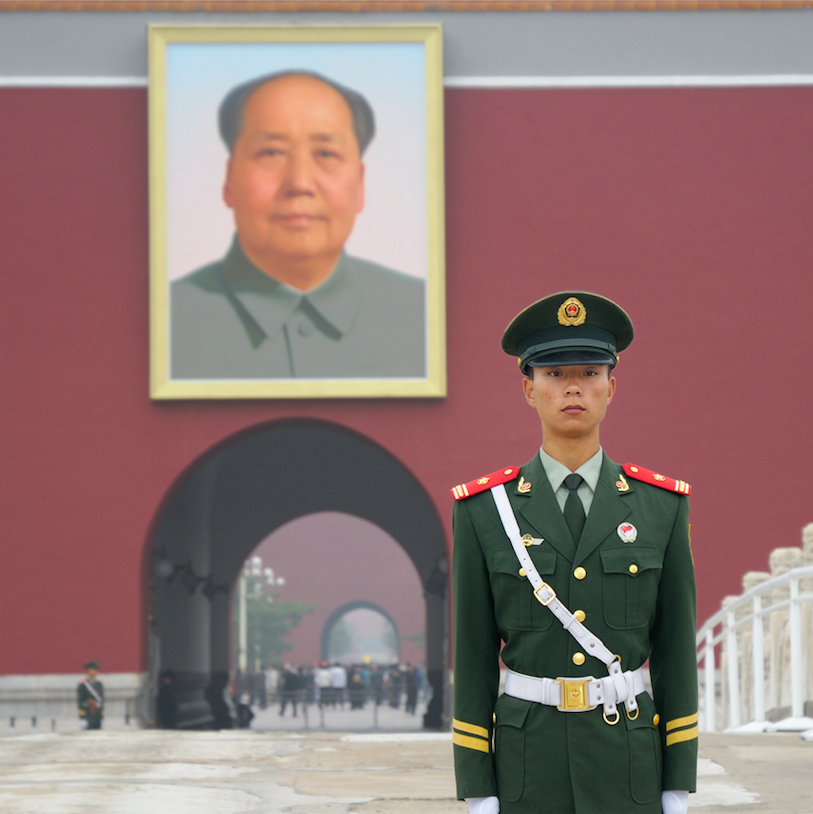 At least once a day, I have to remind myself, “Don’t argue on the internet.”

I’ll see a tweet. From a complete stranger. And maybe my feelings are hurt. Or they said something untrue.

So I hit the reply button.

Every day, I’m about to reply. And something stops me.

I don’t know what. But I’m grateful. Because a lot people don’t get stopped.

I think I stop for two reasons:

Me: “Albert! I can’t believe what this person is saying about me online. I’m so upset.”

Albert Einstein: “Who is this person?”

Me: “I don’t know. Just someone on the internet.”

Albert Einstein: [rolls eyes] “James, how many times have you gone online and then felt worse about yourself afterwards?”

Albert: “Well, then you’re insane to get upset.”

Albert: “The definition of insanity is doing the same thing over and over again and expecting a different result.” 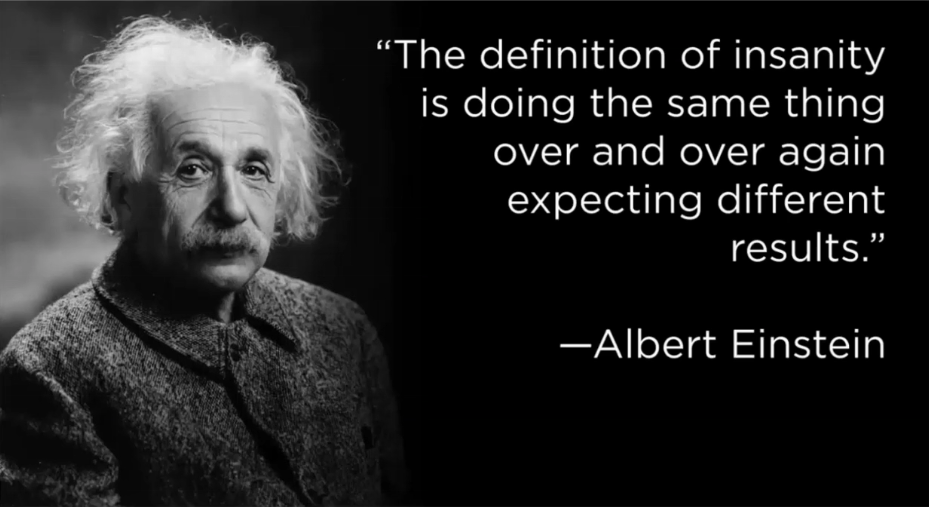 I’ve never met a rational person in my life. It’s not possible. There are too many cognitive biases.

I’ll give you an example:

Let’s say, I visit my daughter at college. And expect her to be the exact same person she was before enrolling. That’s stupid. She’s met new people. She goes to class. She has “teachers.” She’s more independent. Maybe she’s tried drugs.

Either way, there is 100% chance she’s changed in some ways.

But consistency bias will make me forget that. And sort of assume I’m talking to the same old Josie.

We do this with our bosses, colleagues, romantic partners, etc.

And we do this with objects too. It’s why we get upset when there’s more traffic than usual. Or when the computer loads for too long.

People change CONSTANTLY. We get stomach aches, headaches. We get a scary phone call. Or realize we’re running late.

“Regardless of who you prefer, I think everybody can agree the 2016 election broke the internet,” Mark said.

Consistency bias made us scream, “This isn’t normal!”

So people went online to vent.

Something new happened in 2016.

It was the first time in history that we realized, “Oh, I hate people… on the internet. Because of their beliefs.”

I told this to Mark, “We’re all in our air-conditioned homes with our mini-vans parked outside. Life is good. We have clean water. And everything’s great. But now I hate people.”

“Yep, and it’s people you’ve never met. And never will meet,” he said. “That election was just so ugly. For everybody. And that ugliness has continued.”

“What do you mean by that?”

“Well, when I was traveling around the world promoting my first book, I noticed this is happening all over. The same polarization. And the same social media hysteria. It really got me thinking that there is something fundamentally different about this technology in the way that it affects us psychologically. And it’s not necessarily like, ‘Oh kids who use their phone too much get depressed.’ It changes the way we process meaning in our lives. And it makes it more difficult to find hope.”

Think about how counterintuitive that is.

That we choose to disrupt our equanimity. We choose to be less satisfied. And dilute our levels of hope. And meaning. ON PURPOSE. Because social media offers a higher frequency of dopamine than regular life.

So we turn to this dirty place. Full of outrage.

For a chance to win. Or be liked. And escape. 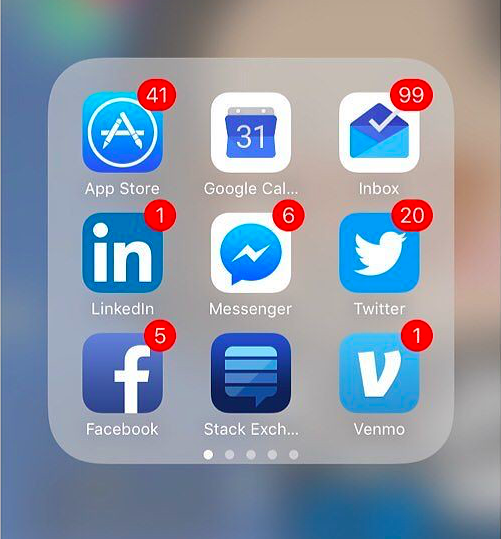 I asked Mark, “What drove you to write this book?”

He said, “I kind of lost the sense of meaning in my life. I actually was more depressed that year (the year his book, “The Sublte Art of Not Giving a F*ck” became a best seller) than I think any year since I was in college.”

“What do you mean? Were you sad? Anxious?”

“So this is actually one of the things I explain in the first chapter of the book,” he said, “is that a lot of people assume depression is sadness. And I think that’s just because depression most often occurs when something tragic happens in our lives. But really depression is not finding meaning in something. It’s when you enter this state where it’s difficult to know what the point of doing anything is. And so I reached that point. But it was really bizarre. Because most people come to a place of meaninglessness through loss. I came to it by through success… like astronomical success. But you can’t really talk to people about it. Because then you look like an asshole. They’re like ‘Dude you just sold 2 million books. What are you complaining about?’”

But he didn’t see the point anymore.

He thought he’d have a lifetime to try to reach his peak. But he did it in one book.

“I had all these dreams for my life. I had visions of who I wanted to be as an author, what I was going to work the next 20 years for,” he said. “And by achieving it so quickly, all those things were taken away.”

It doesn’t sound sad. Because it’s not.

He didn’t sneak into a concentration camp and get stuck there for years like Pilecki. And he knows this.

But that didn’t stop his mind from falling.

Luckily, he had the sense to ask “What the f*ck is wrong with me?”

And he found out what the f*ck is wrong with all of us.