She didn’t remember me.

“We had a mutual friend, Ed Bennett…”

I had just sold a company. And Ed knew Caroline was thinking about building a website. Which is what my company did.

So we met at a Chinese restaurant.

“Oh yeah! Ruby Foo’s,” she said. “I went to Ed because I had this brainy idea that I was going to create Carolines.com and that was going to be the next Comedy Central. I should’ve stayed with that idea.”

But she did something better. She was already the owner and co-founder of Time Square’s most iconic comedy club, “Caroline’s.”

She learned the pattern of their success. She told me the formula:

But I wanted to ask about HER formula. Caroline has owned a comedy club for 35+ years. And now she’s doing something different.

She produced a film called “Ask For Jane.” 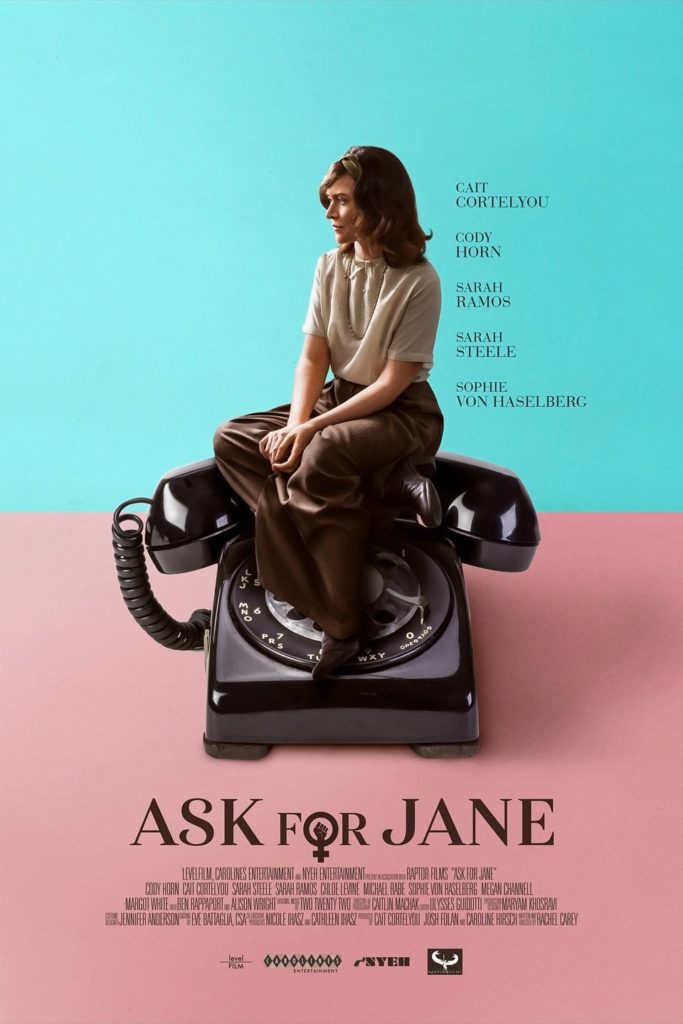 It’s about abortion rights. Why they exist. And how they might go away.

The film is historical, with great acting. It gives you a deeper understanding of how a country gets its voice.

A 22-year-old woman goes to the doctor. She asks for birth control.

She says, “If I was married would you give it to me?”

He says, “Only if your husband said it was ok.”

When I saw this scene in the movie, I didn’t know that was the law. I just thought it was the doctor’s judgment.

“No, these archaic laws existed,” Caroline said. “This is what young women faced at that time.”

I’ll tell you another thing that astonished me: it was illegal to talk about abortion.

“It was considered grounds for manslaughter,” Caroline said.

Can you imagine that today?

If the U.S. government said, “No talking about abortion” we’d all go to jail.

I asked Caroline, “So how did people get around this back then?”

That’s how they got the title of the movie. “Ask for Jane” is what people would do when they wanted an abortion.

You’d dial a number. Someone would answer. And you’d ask, “Can I speak to Jane?”

“This story happened about 50 years ago in the late 60’s at The University of Chicago,” Caroline said. “There was a group of young women who helped their fellow classmates get safe abortions. Because they were hearing about women dying from illegal abortions. So they set out to help one student and then ‘Jane’ became a code name when other students wanted to get some help.”

They became “The Jane Collective.”

They helped 11,000 women get a safe abortion. And it all started because they wanted to help one friend.

I wonder if Alabama is going to start a Jane Collective.

There are 11,000 restrictions against abortion across the U.S. And that number is growing.

“Most women don’t even know they’re pregnant at six weeks,” Caroline said. “They just think they’re late. Or something might not be happening right in their body.”

I didn’t know that.

I also learned that Roe v. Wade wasn’t even about abortion. It was about privacy.

That’s why Caroline made this film.

Because this story is still happening today.

I asked her, “What do you hope to happen from this film?”

“We want young women to go to this movie and understand that these rights that were given in the late 60’s could be taken away.”

When I first met Caroline we talked about business.

It’s weird to think back to that first lunch and life in 1999. Because I couldn’t predict this.

There’s something disorienting knowing that the future won’t always be futuristic.

“Ask for Jane” comes out in NY on May 17th at Village East Cinema. And they’re having a panel discussion with Heather Booth,. She’s one of the original Jane Collective activists.

And then it’s going to open around the country.