Proof That It’s Never Too Late to Master Something New

Everyone says it takes 10,000 hours to become a peak performer.

But it didn’t feel right to me.

Then I read David Epstein’s book, “Range: Why Generalists Triumph in a Specialized World.”

And it confirmed what I’ve always known.

It’s never too late to master something…

I’m spoiling it. David writes about this in his book. And he keeps it a mystery. You start off by reading some obscure career path. About a kid who tried drawing.

He had no talent. And had other interests he liked better. So he does those.

He grows up. Goes to school. But leaves. Because he hates being away from home.

He gets a job at his uncle’s art dealership.

But he’s arguing with customers. And gets sent to the back. Eventually, he quits.

Then he’s a teacher, a bookseller, a clergyman. He moves to coal country to help the poor. And at each step he says, “I found my calling.”

But nothing ever fits.

The 10,000 hour rule would say he’s doomed. Because he’s wasting time on too many skills. That don’t connect. And won’t lead to mastery.

But everyone knows Vincent Van Gogh’s name. And that’s because he used a different formula for mastery…

He followed the generalist’s circle: 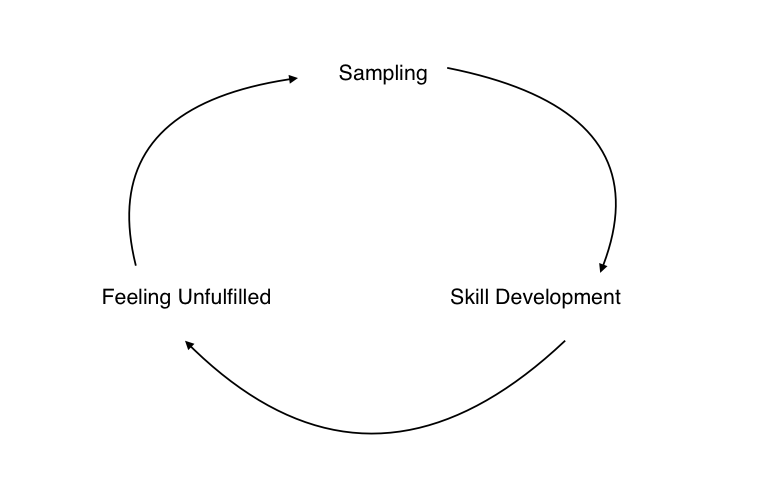 And each time he tries something new he thinks, “This is it!”

He didn’t decide to become one of the most influential painters in the world.

He just did his next impulse. Quit. And did something else on repeat. Until he got sick of it.

No one told him, “Vincent! You have to stay at your job for a year! Think of your resume!”

He followed the impulses of his heart. Emerged with a unique style. And died two years later.

“Everything we know of him, is from the last two years of his life,” David said. “He died at 37. If he had died at 34, he would maybe me a historical footnote.”