I should’ve changed my name.

I went from HBO to Wall Street. To making websites. To writing. To podcasting. To comedy. I became a chess master. Gave talks, blah blah blah.

I kept my name the whole time.

And I have to tell people “All-tuh-chur.”

Tank Sinatra made it easy. He was “George Resch.” The fence salesman.

He has millions of followers. And makes money partnering with big brands like Bumble.

He also has a website that delivers ONLY good news to people called tanksgoodnews.com.

We looked at his account during the podcast. Here’s one from @TanksGoodNews: 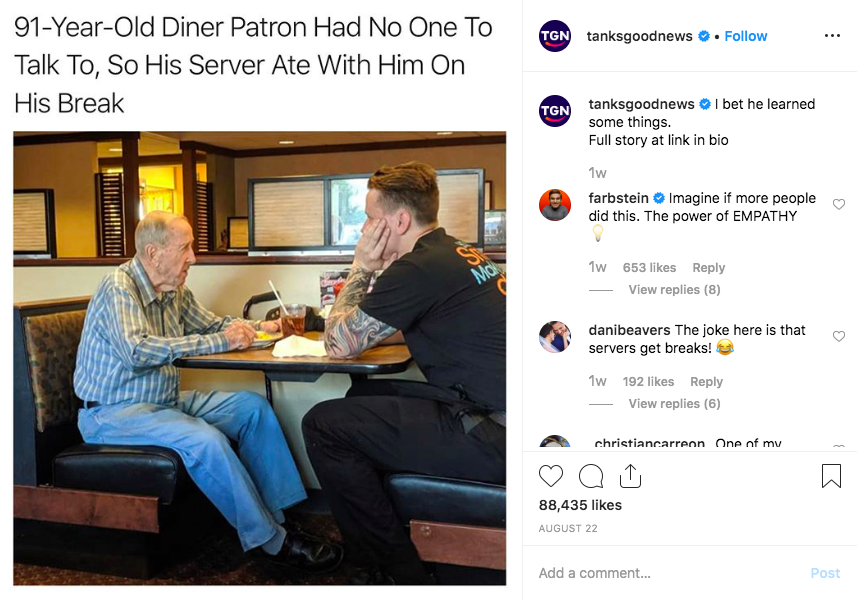 I wanted to know how he went from fence salesman to one of the “lucky” ones.

“Lucky” to have an unconventional career.

But that’s the thing. It’s not luck.

Tank quit drugs and alcohol. Stopped selling fences, started making memes, engineered the funny, figured out how to add the element of human connection, built the software, posted every day.

Found the scene, developed relationships with other meme accounts…

And it’s because he made one decision…

“I don’t want to be a baby or an animal anymore,” he said.

Babies and animals act how they feel.

“Instead of feeling how they act,” he said. “I want to be an adult with a fully developed prefrontal cortex that I can be proud of… that I can standby. But it took a lot of time. And I’m still working on it. I think that’s something I’ll be working on until I’m gone.”

He told me his advice for people who want to take the first step, what to look for and more.

Here’s a full list of what we talk about in this episode: