Three years ago, Gary Gulman came on the podcast and I could barely hear him.

He was talking barely above a whisper. He was red. I asked him what was going on.

He told me about his depression. He told me in the mornings it was very hard for him. To get out of bed. To speak.

He told me how he had an opportunity with Jason Alexander but had to turn it down because of he was depressed and no medication was helping.

October 5 his special, “The Great Depresh” comes out on HBO.

He’s one of the best comedians in the world.

#GulmanTips (Gary has been giving a tip a day since January

These are not just tips for comedy but ALL CREATIVITY and even entrepreneurship). I share a few here: 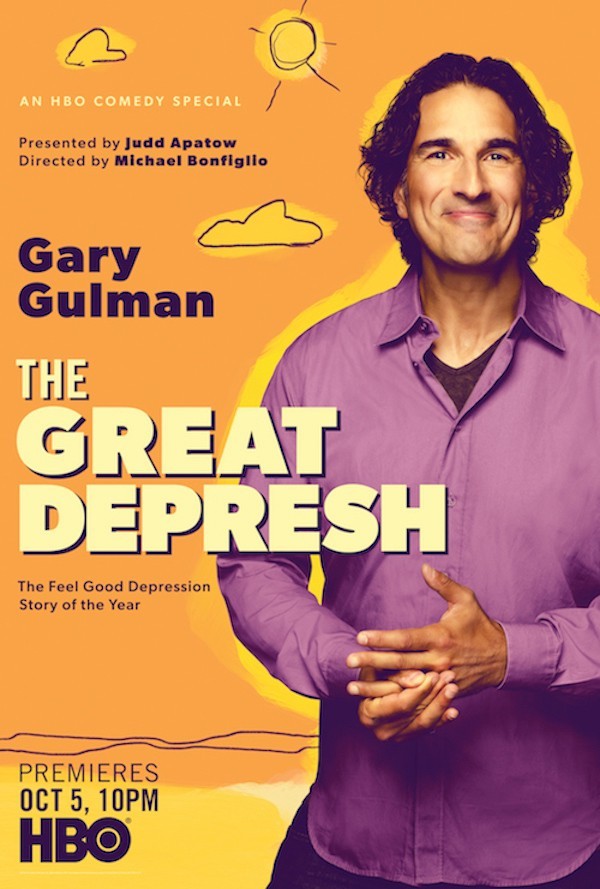 #269) I usually start a joke by trying to write a funny or interesting sentence. It takes away the intimidation of writing an entire joke. Just play around with a few versions of your sentence and maybe say them out loud to get the feel for which is best. #GulManTip #WriteNow

[For me, often I stare at a blank page. I have no idea what to write about. Then an idea might come in my head. “Write about your dad going broke and how that made you more afraid.”

With this tip, I might simply start, “The day I went broke I lost all my friends.” And then start writing from there. Because one of the first rules of writing is: rewrite.]

“H-A-L-T“.When my mood feels off I ask myself “Am I H-ungry, A-ngry, L-onely, or T-ired?” Then I try to do whatever I can to address it. I’ve added “Have I exercised and meditated today?” #GulManTip #WriteNow

[I love this tip in a list of supposedly tips about comedy. Because in order to be a peak performer in any field, and I say this having interviewed over 500 super peak performers, you need energy. You WILL NOT have energy to do your passion if you are H-A-L-T!]

A year later he came back on.

One of his jokes was so amazing (his famous “Abbreviated States” joke he performed on Conan a year or so earlier) that even the great comedian Patton Oswalt said “it reminded me of what comedy was supposed to be” even as Oswalt was suffering from Depression.

When Gary came into the room I explained to him I wanted to do an entire podcast about that one joke.

He laughed but then said, “it makes me think I’ll never write as good again.”

Then after the podcast he told me he was quitting comedy. He was moving back in with his parents. He was going to be a counselor at a summer camp.

I couldn’t believe it. We went to lunch and spoke about it more. It seemed like his spirit was crushed.

His entire adult life he had been a standup comedian. He was considered great. But his depression was keeping him from success.

“What’s going to happen?” I asked him, not really thinking about how I was wording the question.

#271) I wish kids could learn to shoot a basketball on 8 foot hoops. Similarly, I wish new comics could learn on nurturing audiences. You can’t but you CAN concentrate on delivery and preparation without worrying about laughs. Just shoot with good form! #GulManTip #WriteNow

[I like Gary’s tip 271 because it reminds me of all skill acquisition. Try to isolate one skill at a time, so you can more clearly see what went right and what went wrong and then adjust. It’s like in basketball, just practicing three-point shots. Or in chess, just practicing tactical problems.]

#15) . You know that joke you’re sick of telling? Write/type it w/ space in between each sentence. Add some details, change a word or unpack an idea. To me, unless it’s on a Special a joke isn’t done. When the audience is mouthing the words with you it’s done. #GulManTip #WriteNow

[I just used this tip in a public talk I had to give. I added in some side stories of bigger stories that I knew worked really well but were feeling a bit stale to me. It was amazing how much more powerful the reaction was from the audience.]

When he came back, I went to see him perform. He was better than ever. My friend I was with was blown away. “These jokes are like poetry.”

He came on the podcast.

He had started giving out one #GulmanTip a day on Twitter. Tips from his 25 year career about comedy.

Each tip is amazing. Most days, the only reason I log onto Twitter is to see his tip of the day.

Was he out of his depression? He seemed 500% better. It was amazing. We spoke about how he had recovered, and we dived into his tips.

He also said he was starting to joke about his depression for the first time ever.

I went to another set of his and watched him do it. I wish I could do what he did.

#24)There are things you’ve become expert in because of passion. List them and write jokes about them. Writing informed by a vast knowledge in unusual subjects will lead to original compelling jokes. @pattonoswalt is King of this. Today, mine your obsessions. #GulManTip #WriteNow

[BOOM! I needed this. I started listing my passions and then saw it was so much easier to write jokes about them and do more research to find quirky ideas to speak about. What a great tip for creativity. And with this, you can make just about subject interesting.]

26)Today go through your joke inventory. Write/type it out. Identify or create logical connections between jokes and combine them. It can be easier to hold a crowd’s attention when you stay on topic longer. Have a good show tonight! #GulManTip #WriteNow

[BOOM! This tip is almost the definition of comedy: find two totally disparate ideas that you are interested in and find some absurd way to connect the dots.

In the podcast, for instance, Gary and I talk about the connection between “hockey” and “Jesus”.

I saw a set recently (by Andrew Schulz) where he connected the concepts of “gender equality” with “which countries have the best cooking.”]

I watched Gary tape the special. Hundreds of people were there.

To take autobiography and structure it into something you can say on stage and make people laugh is almost impossible.

It’s not like making your friends laugh. It’s finding the universal in your own pain, and using the toolkit of comedy, plus skills developed over years, to find the points that are relatable, painful, and then…funny.

I took my five kids, my wife, my podcast producer, others.

Gary, for years, had been writing amazing jokes. But they weren’t jokes about his past.

They were autobiographical in that they had a point of view. But they weren’t about his life. Until now.

His special, produced by Judd Apatow, is coming out on HBO on October 5 at 10pm.

29) Ever feel like “I’m too old. I’ve been doing it so long. I can’t get any better.”? George Carlin said he really figured it out in 1988. He was 51 and at the time he was GEORGE CARLIN!!! Don’t stop pushing yourself. You owe it to your audience and yourself. #GulManTip #WriteNow

This week to talk about the special coming out on HBO on Saturday, “The Great Depresh”.

How he went from his already-excellent comedy writing to bringing more autobiography into it.

Many comedians didn’t get big until they started talking about their life: Richard Pryor and George Carlin are great examples.

We spoke about his #GulmanTips that now have a cult following. (I hope he keeps doing them forever but I have a feeling he will stop at #365).

I laughed in the podcast. It was so valuable to me.

But about living. About coming back again and again.