What It Takes to Break a World Record

I started interviewing comedians in 2016.

I got good feedback.

Everyone says, “You’re not going to make it.”

The comedian, just like the entrepreneur, has to ignore the doubters. They have to push against the current. Write every day. Get up on stage. Bomb. Get up again. Then they have to figure out to make money, book shows, grow a fanbase, market.

That’s what Aaron Berg did. And it finally paid off. He broke the world record for most sets in one night.

This documentary is like a masterclass in comedy. It’s called “25 Sets” (you can pre-order it on iTunes now). Or get it on Amazon October 15.

He does a lot of crowd work. Which means he has to relate to people, be in the moment. And find the funny.

This is one of the thousands of skills that transfer from comedy to business.

I’ll give you an example from my podcast.

I was doing a live show. One of my producers held up a sign. She wanted to get my attention without distracting the audience. Or stopping the show.

So I called out, “Why are you holding a sign that says ‘Mic?’”

The mic was going in and out. I didn’t know. So we replaced it in front of everybody. Which is better than if she tried to crawl on her hands and knees, act invisible and swap mics.

You have to call out what’s happening.

That’s how you get people engaged.

That’s how you build trust.

I’ll give you three more lessons from my interview with the world-record breaking comedian, Aaron Berg.

1. ENJOY WHAT YOU’RE DOING FIRST
“Great is an unachievable goal,” Aaron said. “If you set your goal to be a great comic, you’re going to fail endlessly. And it’s going to be miserable all the time. If you say, ‘Hey, I want to enjoy this. And make these people enjoy this, and whatever happens, happens, that may happen.”

2. DON’T FAKE IT
“I just try to feel what I’m actually feeling,” Aaron said. He doesn’t pander. He doesn’t make up. Or try to say “the right thing.” He’s just real. And flawed. And fine with that.

3. GO PAST YOUR LIMIT
It’s the same way how Olympic runners train for distances farther than their race. Baseball players practice with weights on their bat.

Aaron did 25 sets in one night. Now doing four sets in a night seems so easy. That’s the benefit of going past your limit.

Here’s a list of everything else we talk about in this episode: 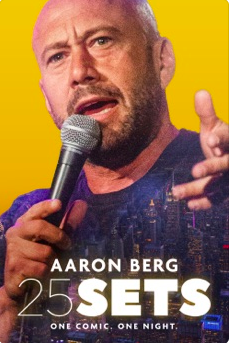