The Cross Between Business & Elections

Phillip Stutts on What Good Marketing Campaigns Do & Don’t Do

I don’t have to write these articles anymore. Because Phillip Stutts spells it out for me. HE won’t say politics is a scam.

But I think he votes.

He’s worked on campaigns with presidents, senators, and every other political office.

I wanted to hear about both.

His company is Win Big Media. And his book is “Fire Them Now: The 7 Lies Digital Marketers Sell…and the Truth about Politics.”

He’s going to tell you how digital marketers are spying on you (it’s changed in the last few years). You’ll hear where they’re gathering your data from now. And the new ways they’ll use it to target and persuade you. He’ll also say why corporate marketers all need to learn from political campaigns.

I asked him, “What’s the biggest mistake you see business marketers do that political markets avoid?”

“Oh geez,” he said. “They sit around a table and brainstorm! I never brainstorm ideas unless I’m looking at data first.”

So that’s one lesson: brainstorm with data.

Unless you’re practicing your idea muscle. Those should be bad ideas. And the process should make your brain sweat.

One more big lesson from Phillip:

Facebook isn’t going to be your biggest manipulator in this election.

“Facebook was the end all, be all for a good three-year run,” he said. “And now it’s Google. It’s YouTube.” And streaming will have the biggest impact.

You watch an ad that bashes Elizabeth Warren. Then YouTube tells her campaign. They buy the data. And target your IP address with opposite ads to make her look good.

So… may the best persuader win.

Here’s a list of everything Phillip and I talked about.

And here’s what he said about the interview: 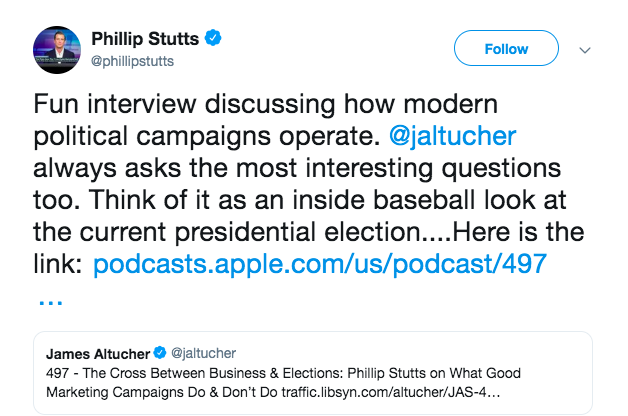